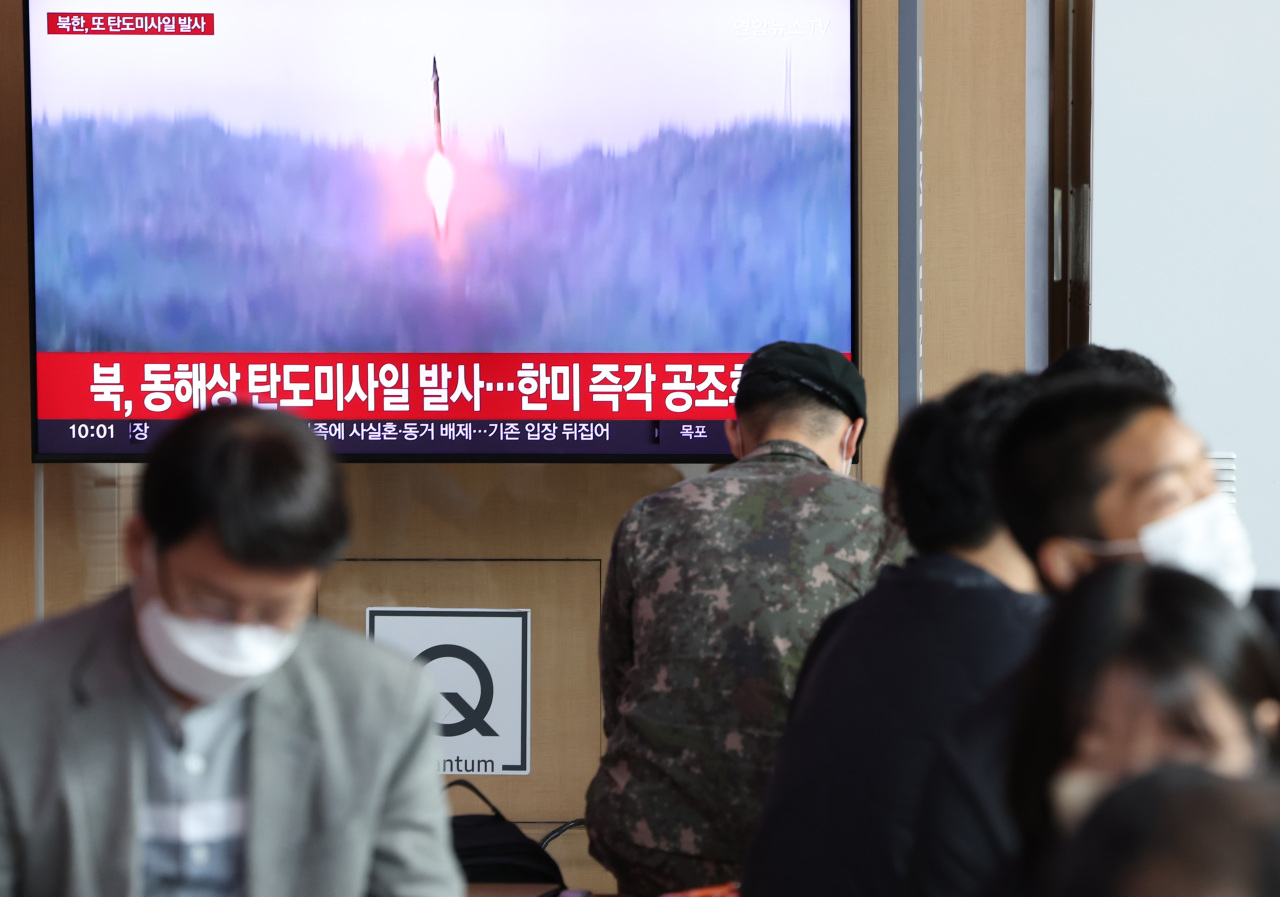 South Korea’s Joint Chiefs of Staff said “two short-range ballistic missiles were fired from the Sunan area in Pyongyang city toward the East Sea from around 06:45 a.m. to 07:03 a.m. on Saturday.”

The short-range ballistic missiles traveled about 350 kilometers at a speed of around Mach 6 and an altitude of 30 km, the JCS said in a statement, adding that South Korean and US intelligence authorities are analyzing the specifications.

The travel distance is approximately equidistant from the launch site to the South Korean Army, Navy and Air Force Headquarters in the city of Gyeryong, South Chungcheong Province, where the national event was held to mark the 74th Armed Forces Day.

The missiles were reportedly fired from a transporter erector launcher and targeted a specific region in the East Sea. The target is believed to be Alsom, a small uninhabited island off North Korea’s east coast.

The JCS said its chief, Gen. Kim Seung-kyum, and Gen. Paul LaCamera, chief of the United Nations Command and United States Forces Korea, held a virtual meeting and closely shared their assessment of the situation.

The US Indo-Pacific Command also issued a statement  to reaffirm the US “ironclad” defense commitments to South Korea and Japan, explaining that the US is consulting closely with its  allies and partners on the two ballistic missile launches.

The presidential committee also “deplored North Korea’s behavior of focusing on conducting provocations when its people’s livelihoods are in a critical situation due to economic difficulties and the antivirus crisis.”

The ceremony was held under the theme of “strong defense, powerful military based on science and technology” and aimed to “demonstrate strong response capabilities and resolution to counter North Korea’s nuclear and missile threats,” according to South Korea’s Ministry.

President Yoon sent a message of warning to the Kim Jong-un regime, urging North Korea to relinquish its nuclear weapons in his speech marking the Armed Forces Day.

“Our military will maintain a firm readiness and protect the lives and property of our people against any kind of North Korean provocations and threats,” Yoon said.  “If North Korea attempts to use nuclear weapons, it will face a decisive and overwhelming response from the South Korea-US alliance and our military.”

Yoon underscored his plan to significantly reinforce the military’s reconnaissance and surveillance capabilities and strike capabilities against North Korea by expeditiously completing the establishment of an indigenous three-axis defense system.

The three previous launches were conducted at different places and times.

The spate of missile launches in short intervals seems to be an apparent tit-for-tat action against the alliance’s move to reinforce their deterrence and readiness and crank up trilateral security cooperation with Japan against mounting threats from North Korea.

This week, the US Navy’s nuclear-powered aircraft carrier USS Ronald Reagan and its carrier strike group participated in the key bilateral and trilateral exercise with its allies, which was staged for the first time since 2017 on and near the Korean Peninsula.

South Korea, the US and Japan on Friday conducted an anti-submarine warfare exercise in international waters of the East Sea to enhance combined capabilities and interoperability against escalating threats from North Korea.

The trilateral exercise came a day after the South Korean and US navies conducted their combined maritime exercises in South Korea’s East Sea from Monday to Thursday.

US Vice President Kamala Harris also made a rare trip to the heavily fortified Demilitarized Zone, which straddles the inter-Korean border, on Thursday afternoon in a move to show off the US defense commitment to South Korea despite North Korea’s missile launches the previous day.

Harris underscored that the US  would “do everything” in its power to ensure its US’ ironclad defense commitment to South Korea, including its extended deterrence commitment supported by the full range of US military capabilities. At the same time, Harris launched a blistering criticism of North Korea’s “brutal dictatorship, rampant human rights violations and an unlawful weapons program.”