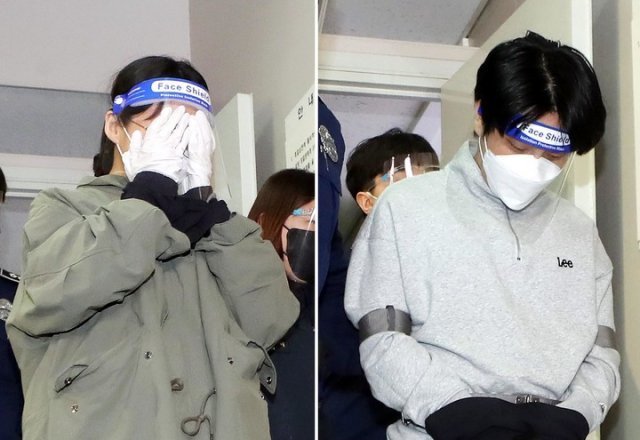 Lee Eun-hae (left) and Cho Hyeon-soo enter the Incheon District Court building in Incheon, in April. (Yonhap)
The prosecution on Friday asked for life sentences for a woman and her accomplice who are standing trial for murdering the woman's husband.

In the trial for Lee Eun-hae, 31, and Cho Hyeon-soo, 30, who are accused of killing Lee's husband and attempting to cover it up as an accidental drowning, the prosecution has requested life imprisonment. The court's decision will be made on Oct. 27.

An official from the Prosecutors Office at the trial on Friday said the nature of the crime is serious, as the two planned for a "perfect crime" by disguising the murder as an accident for the life insurance payout.

The prosecutor also spoke of Lee and Cho's alleged previous attempts to kill the husband, in which they say they tried to poison the husband with puffer fish toxin in February 2019 and drown him in May of the same year.

Given the cruelty of the crimes, the two suspects should receive heavy punishment, the prosecutor contended.

Lee has continued to deny the crime. “(I) cannot say that I loved (my husband), but I never killed him,” Lee said. Lee’s accomplice also denied the charges against him.

Prosecutors allege Lee and Cho killed Lee’s 39-year-old husband in June 2019. They say the two prodded the husband to jump from a rock 4 meters high into a 3-meter deep valley without rescue equipment available in Gapyeong, Gyeonggi Province. The two reportedly later sought to receive a life insurance payout of 800 million won ($559,000).

Lee and Cho previously went into hiding during the questioning phase. They did not appear for a second round of questioning on Dec. 14, and police began a search operation.

Lee and Cho evaded capture for more than three months until police put them on a wanted list in late March and captured them in April in Goyang, Gyeonggi Province.