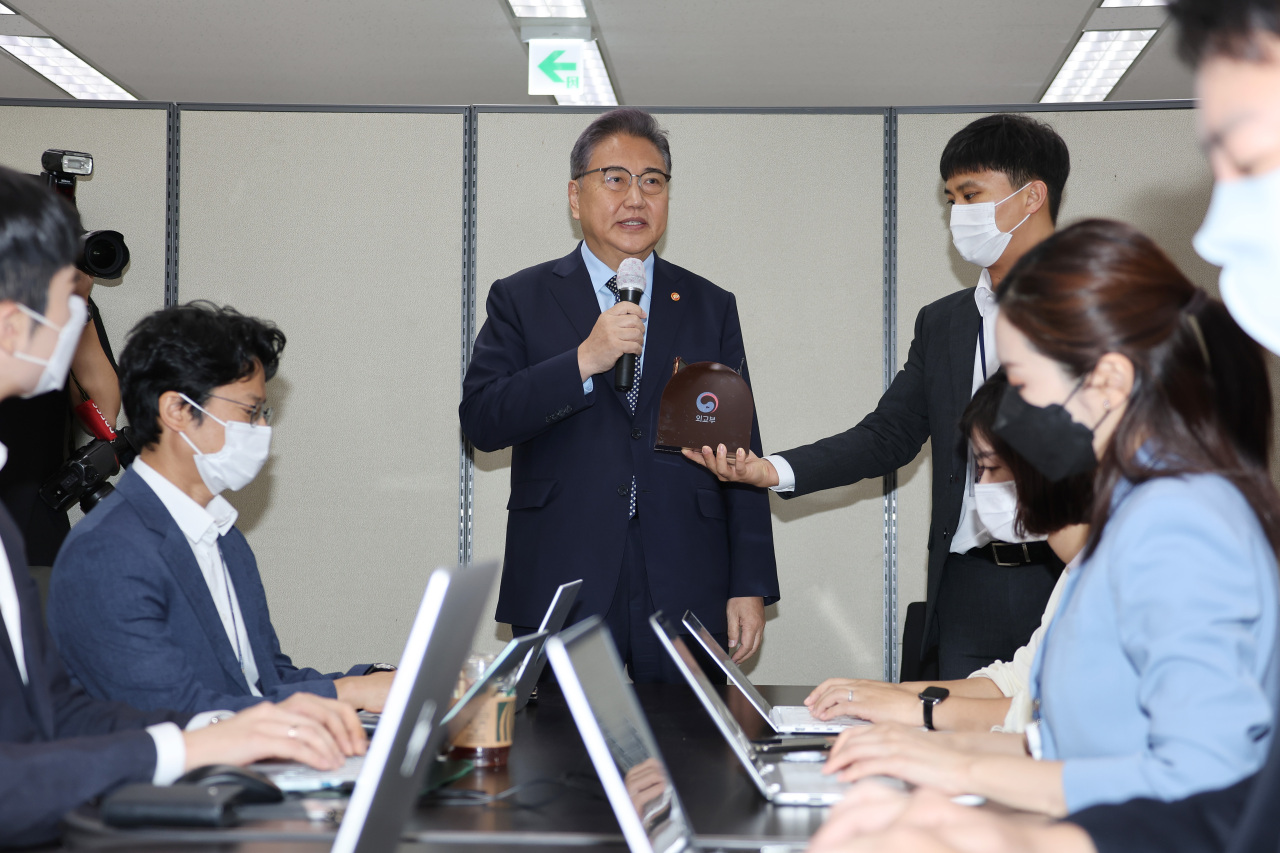 At the same time, Park said he would "carefully" take in the criticisms and do his best to carry out his duty as foreign minister.

The main opposition Democratic Party of Korea and others have taken issue with President Yoon Suk-yeol's trip to Britain, the United States and Canada earlier this month, saying that not only had he failed to achieve tangible diplomatic outcomes, but that he also created diplomatic mishaps.

Demanding that the Yoon administration take responsibility for its "diplomatic disaster," the Democratic Party passed a no-confidence motion it put up in the National Assembly’s plenary session on Wednesday.

“The opposition party has undermined the president's (overseas) trip as a ‘diplomatic disaster’ but I cannot agree to that,” Park told reporters at the Foreign Ministry headquarters.

“I have mixed feelings seeing how our politics have gone so far to this. I could not sleep well for the past couple of days."

Park stressed it is not a time for political strife, and said he will take in the opposition's criticisms and requests for him to do better in diplomacy for the national benefit.

"Personally, I feel bad and distressed. But calm comes after a storm, and I will take this as an opportunity for a new start and devote all my capabilities and passion for South Korea’s national benefit.”

The foreign minister said he talked with the president over the phone after the no-confidence motion passed at the National Assembly, but did not elaborate on the details of their talk.

While the motion passed at the National Assembly, it is highly unlikely that Park will be replaced, as it is nonbinding and the president has the right to dismiss it.

Yoon has denied critics' accusations that his overseas trip was a diplomatic fiasco, and defended Park as a "capable person."

“Foreign Minister Park is a remarkably capable person and is constantly on the move around the world for the sake of the national interest, to the point where I worry about his health,” Yoon told reporters on Thursday.

“I think the public is clearly aware of what is right and wrong,” he added.

The main opposition has criticized Yoon for failing to pay his respects to Queen Elizabeth II at her coffin in Britain, and for an allegedly offensive remark against the US Congress and US President Joe Biden, caught on a hot mic.