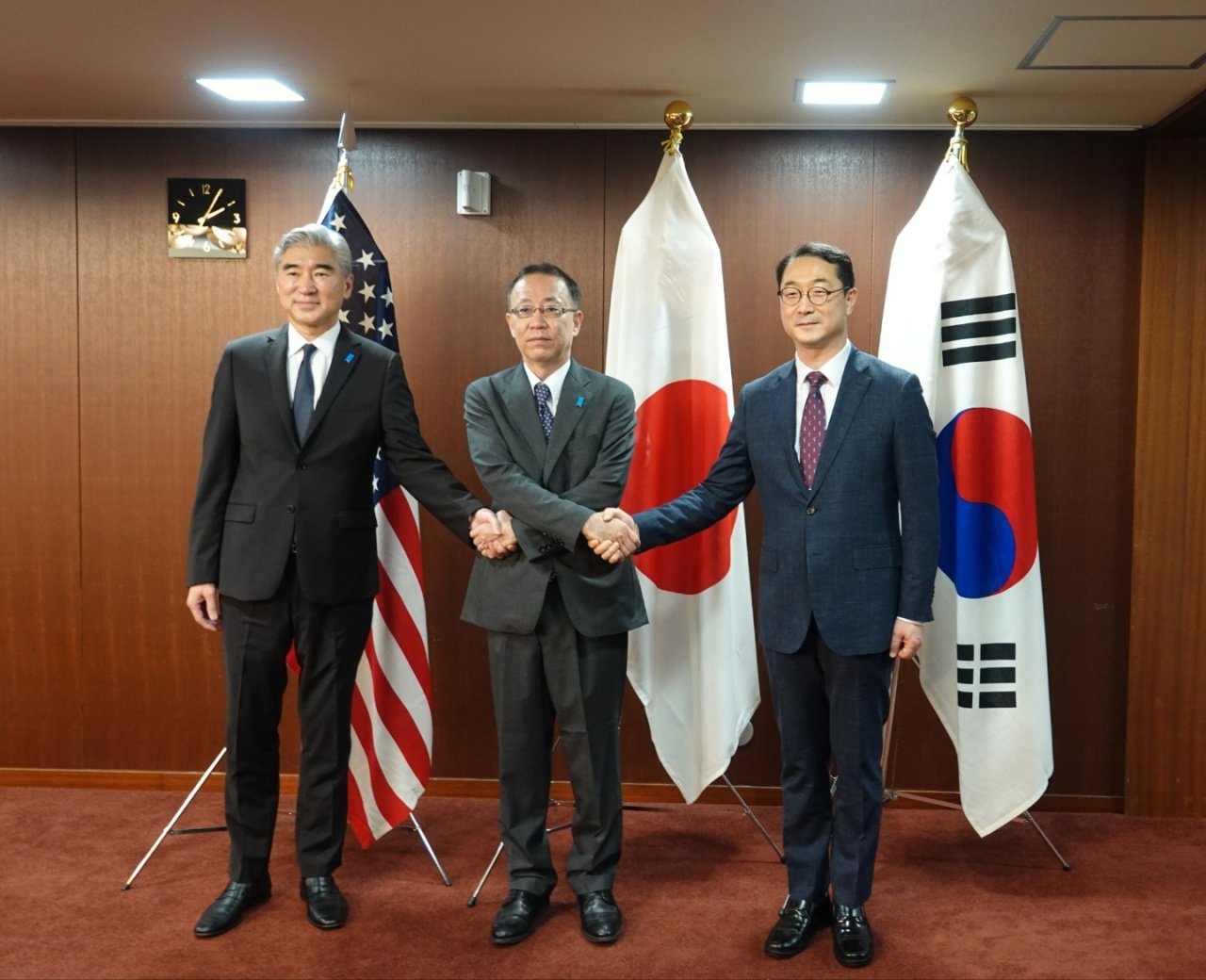 After North Korea fired two short-range ballistic missiles toward the East Sea on Wednesday evening, Seoul’s top nuclear envoy immediately held talks over the phone separately with his US and Japanese counterparts to affirm bilateral and trilateral cooperation to counter the North’s nuclear threats.

“The two sides strongly denounced North Korea for firing short-range ballistic missiles only three days after its missile launch on Sunday despite stern warnings from the international society,” the ministry said in a press release.

“They also emphasized that (the Pyongyang’s missile launches) clearly violate the United Nations Security Council resolutions and pose threats to the Korean Peninsula and the international society.”

The allies also agreed to maintain watertight joint defense posture and continue to bolster bilateral and also, trilateral cooperation including Japan, to deal with North Korea’s nuclear and missile threats.

Kim made the phone calls in France, as he is traveling Europe to meet with officials of the European Union and North Atlantic Treaty Organization to discuss pending issues on the Korean Peninsula and North Korean provocations.

South Korea, Japan and the US are also planning to conduct a trilateral military exercise in waters off the Korean Peninsula, which would come in five years since April 2017.

Rep. Ahn Gyu-back of the main opposition Democratic Party of Korea revealed that the three countries are set to stage an anti-submarine warfare exercise on Friday in the international waters outside the Korean Theater of Operations.

North Korea has carried out consecutive missile launches in the past week as Seoul and Washington is conducting a large-scale combined maritime military exercise in the East Sea involving the US' nuclear-powered aircraft carrier.

Pyongyang launched one short-range ballistic missile on Sunday, a day before the naval exercise kicked off. On Wednesday -- a day before the US Vice President Kamala Harris’ planned visit to Seoul -- the reclusive regime fired two short-range ballistic missiles from the Sunan area in Pyongyang city towards the East Sea at around 6:10 p.m., according to Seoul’s Joint Chiefs of Staff.

In the recent months, Pyongyang has been seen to ratchet up military provocations, raising tension on the Korean Peninsula and the region.

Seoul’s National Intelligence Service said Wednesday that Pyongyang may conduct a seventh nuclear test soon, as it is observed to have completed the restoration of Tunnel No. 3 of its Punggye-ri nuclear testing site.

“The National Intelligence Service forecasts that there is a high chance that the test would be conducted after the Chinese Communist Party's 20th congress opening on Oct. 16 but before the US midterm elections on Nov. 7,” Rep. Yoo Sang-beom of the ruling People Power Party said in a press briefing on NIS’ report to the National Assembly.