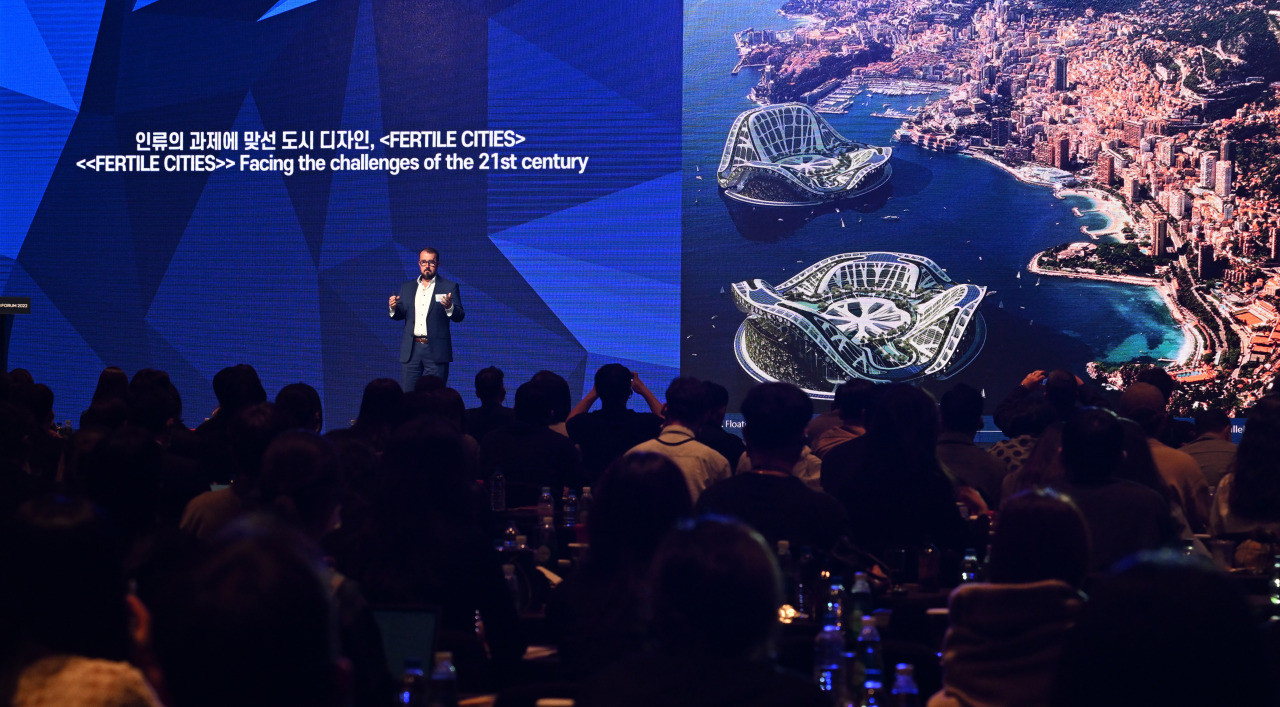 “Young people these days are very sensitive to the climate crisis and climatologists have started predicting gloomy future for mankind," Callebaut said during a lecture at Herald Design Forum 2022 in Seoul, Tuesday. "I do not want to spread fear even more but I want to talk about the future that we all dream of, and I will take you to the dream city where humans and nature can coexist together.”

The biggest challenge for architects is designing architecture that are able to protect future generations and the environment, Callebaut said.

“Around 70 percent of dwellers in 2050 are expected to live in urban spaces like Seoul and Paris. We need to find new solutions that are sustainable and eco-friendly, and we need to develop urban protocol,” he added.

The Paris-based Belgian architect introduced “biomimicry,” a new architectural concept that applies nature to architecture. He has been a strong advocate of eco-responsible architecture, taking inspiration from all living things, employing shapes and structures found in ecosystems.

The architect has proposed several green architectural projects based on the concept of biomimicry -- “Lilypad,” floating cities for climate refugees; “Dragonfly,” vertical farms in New York City; and “Hydrogenase,” zero-carbon hydrogen planes. The projects were shown at Expo 2010 in Shanghai and Art Dubai 2010, leading him to establish his own architecture agency 12 years ago.

For the “Tao Zhu Yin Yuan” residential high-rise in Taipei, Taiwan -- a 10-year project that was completed in 2018 -- Callebaut designed the complex so the most of the open spaces would be planted with trees in order to raise carbon absorption and implement symbiosis with the natural environment.

In 2014, Vincent Callebaut Architectures was designated as a participant in the Paris Smart City 2050 project that aims to build a sustainable city and combat climate crisis. In the project, Callebaut suggested architectural models such as the “Bioclimatic Mountain Towers” and “Photosynthesis Towers.”

In South Korea, he proposed a floating ferry terminal named “Manta Ray” at Yeouido Han River Park in Seoul in an international competition held by the Seoul Metropolitan Government in 2017.