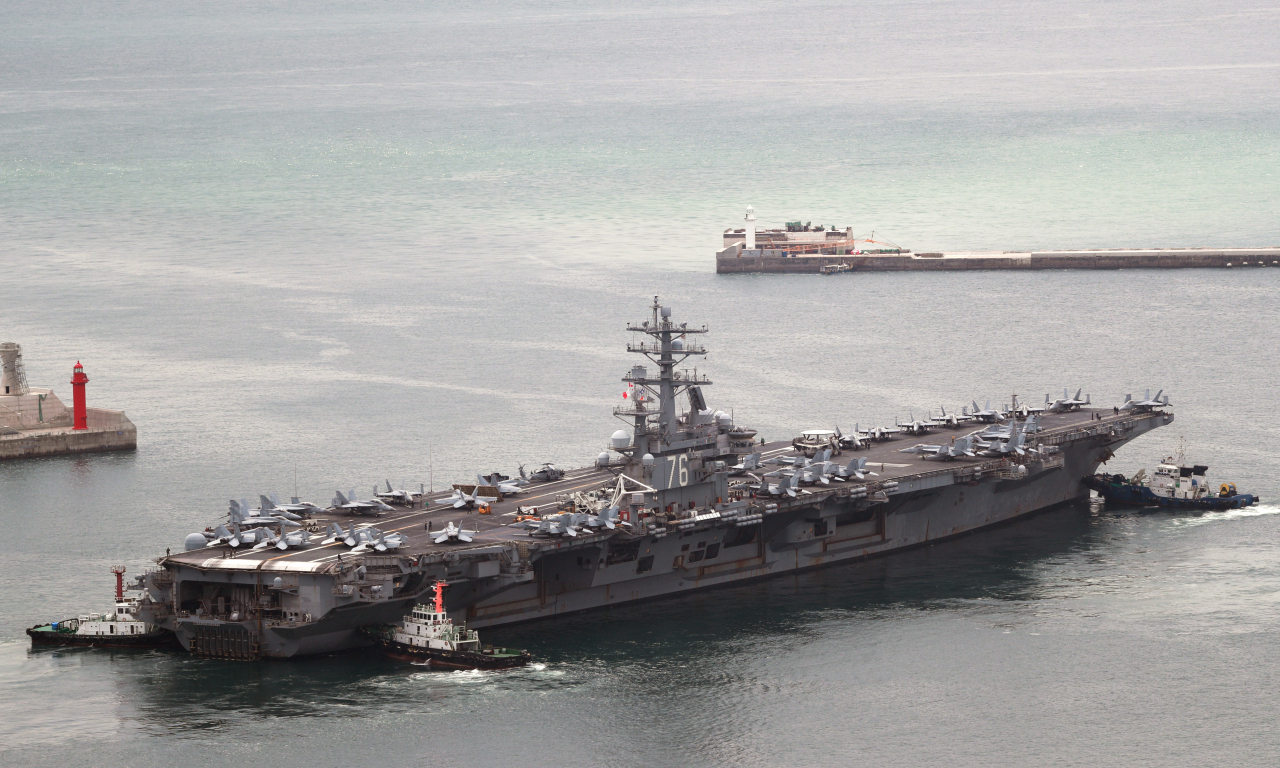 The U.S. nuclear-powered aircraft carrier Ronald Reagan sails from a naval base in Busan, southeastern South Korea, on Sept. 26, 2022, as South Korea and the United States kicked off their first combined naval exercise, involving the American aircraft carrier, near the peninsula in five years. The four-day drills came as Seoul and Washington are cranking up security cooperation amid continued speculation that North Korea could engage in provocative acts, like a nuclear test or submarine-launched ballistic missile launch. (Yonhap)
South Korea and the United States began four days of combined naval exercises, including a US aircraft carrier, off the Korean Peninsula’s east coast on Monday to enhance allied military capabilities against North Korean threats.

They are the first such drills staged in South Korean waters since 2017.

“The exercises were designed to demonstrate the South Korea-US alliance’s strong will to counter North Korean provocations and improve the capabilities of the two navies to carry out combined operations,” the South Korean Navy said in a Korean-language statement.

“The two navies aim to enhance their combined operational capabilities and interoperability to prepare against North Korean provocations through realistic training exercises,” according to the South Korean Navy.

The South Korean and US navies have mobilized more than 20 warships for their military exercises. Among those participating from the South Korean naval fleet are the 7,600-ton Aegis destroyer Seoae Ryu Sung-ryong and 4,400-ton Munmu the Great destroyer.

A range of aircraft, including F/A-18 Super Hornet fighter jets, P-3 and P-8 maritime patrol aircraft and AW-159 and MH-60R multimission naval helicopters, has been dispatched from the South Korea and US navies.

“The US and the Republic of Korea share one of the strongest alliances in the world and we grow stronger as an alliance because of our routine exercises here in South Korea and the close relationship and ties that we forge from operating at sea together,” said Rear Adm. Michael Donnelly, commander of the carrier strike group.

“Our combined US and ROK naval force is demonstrating its strength and resolve by conducting this exercise together.”

Rear Adm. Kwak Kwang-sub, commander of the South Korean Navy’s Maritime Battle Group 1, said the training would enable South Korea and the US to “maintain a firm maritime defense posture based on the ironclad alliance.”

The bilateral maritime exercises involving a US carrier strike group will be staged in the Korean Theater of Operations, or KTO, for the first time since November 2017, when tensions were heightened in the aftermath of North Korea’s fifth and sixth nuclear tests that year.

The four-day maritime drills came three days after the US Navy’s USS Ronald Reagan, a 100,000-ton nuclear-powered supercarrier, and its strike group arrived at a naval base in the southern city of Busan on Friday with a total of around 4,900 crew members and 90 aircraft.

The port visit marks the first time in five years that a US carrier strike group has entered the naval base for bilateral maritime exercises.

In an apparent tit-for-tat action against the alliance’s move, North Korea fired one short-range ballistic missile from Taechon County in North Pyongan Province into the East Sea on Sunday morning.

South Korea’s Joint Chiefs of Staff said the missile traveled about 600 kilometers at a speed of Mach 5 and at an altitude of 60 km.

Analysts have taken note of the missile's travel distance, pointing out that Taechon County and Busan are around 600 kilometers apart. But North Korea’s state media on Monday remained silent on the missile test.

The South Korean military has also braced for the possibility of North Korea launching more missiles, including a submarine-launched ballistic missile in the eastern coastal city of Sinpo. The military has recently detected signs of Pyongyang preparing for an SLBM test at the Sinpo South Shipyard.

“We maintain a firm readiness posture while keeping a close tab on related movements in preparation for various, additional provocations,” Col. Kim Jun-rak, a spokesperson for the Joint Chiefs of Staff, said Monday during a regular press briefing, adding the military is closely monitoring related facilities including the Sinpo South Shipyard.

The deployment of the USS Ronald Reagan is the follow-up measure to the commitment by South Korean President Yoon Suk-yeol and US President Joe Biden to deploy strategic US military assets in a “timely and coordinated manner as necessary” at their May 21 summit. Both sides also committed to “enhance such measures and identify new or additional steps to reinforce deterrence” in the face of North Korea’s destabilizing activities.

Speaking at a news conference Friday, Rear Adm. Michael Donnelly said the operation of the US carrier strike group in and around the Korean Peninsula illustrates the US commitment to “face any challenge or any threat” with South Korean forces whenever required.