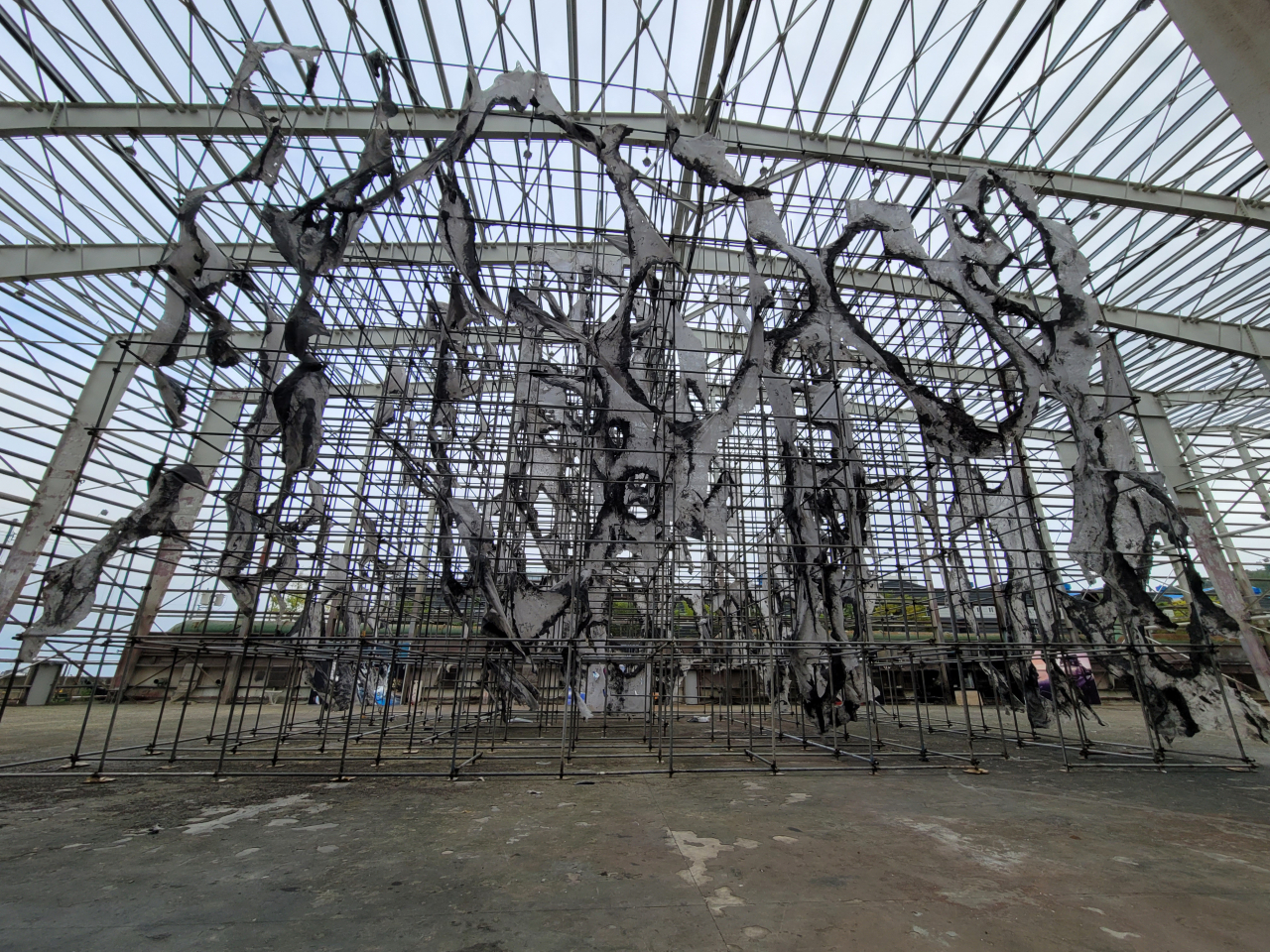 An installation view of "Landscape with Many Holes: Skins of Yeongdo Sea" by Lee Mi-re at Yeongdo island (Busan Biennale Organizing Committee)

BUSAN -- When you think of Busan, what comes to mind? While many would think of beaches in the port city, only a few would think of the hillside roads that connect villages and people from its surrounding regions. Sambok Road, a mountainside road in Choryang village that overlooks coastal areas, is one the venues of the Busan Biennale 2022.

“I think what really defines Busan is this kind of winding mountainside road which is found across the city and little-known to people outside of Busan. In fact, there are many people from Busan who have never been up here,” said artistic director Kim Hae-ju during a car ride to the upper side of Choryang village on Sept. 14.

A deserted house located on the hill of Choryang village is being used as an exhibition venue for a single channel video work by Song Min-jung titled “Wild Seed,” a piece that explores the world of mixed physical and nonphysical relationships. Right next to the exhibition venue is a cafe, Choryang 1941, located inside a renovated house originally built in 1941. 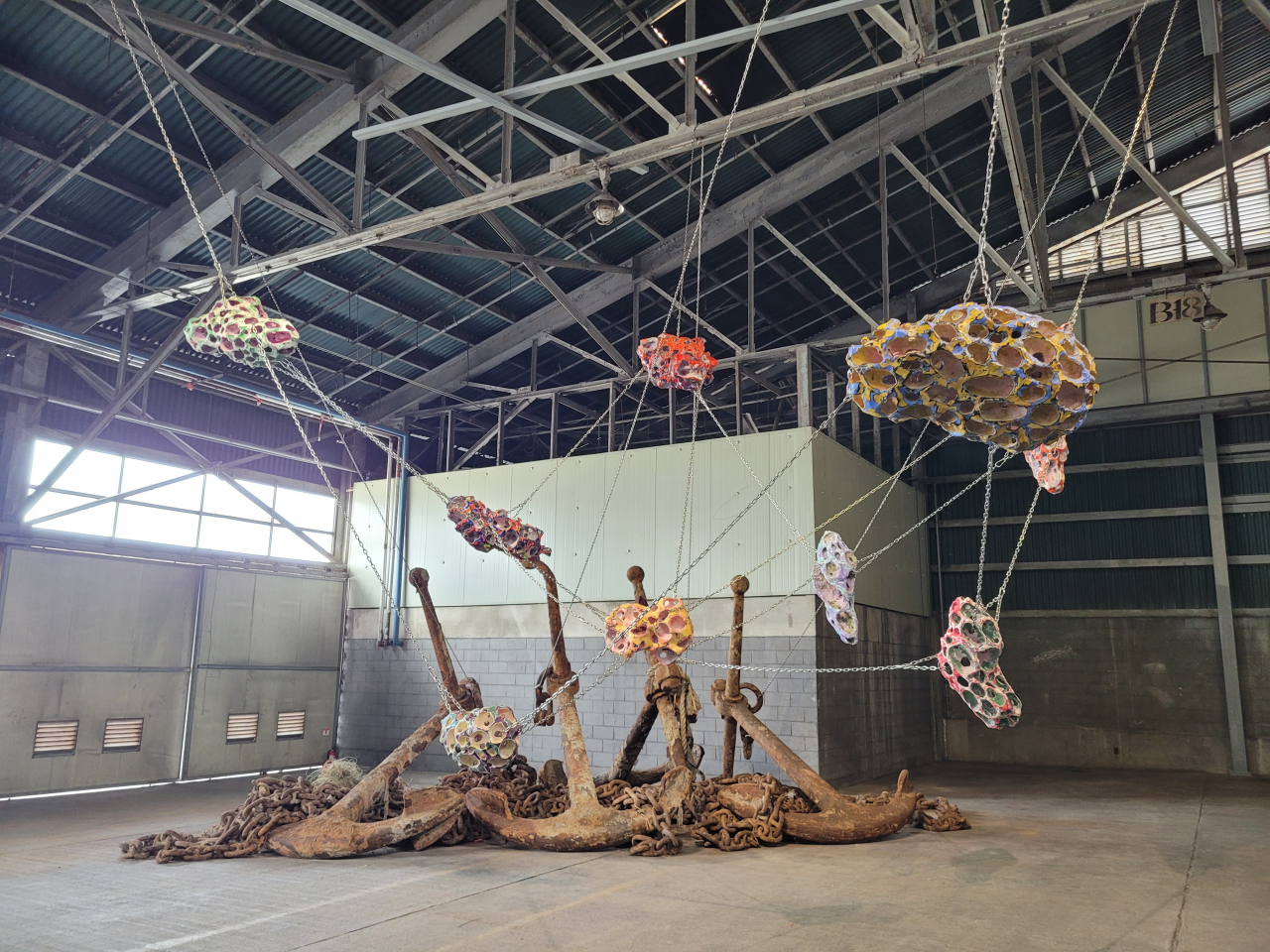 The 65-day biennale kicked off on Sept. 3 at four venues across Busan -- Museum of Contemporary Art Busan, Pier 1 of Busan Port, Yeongdo and Choryang with the theme of “We, on the Rising Wave.” Some 80 artists and collectives from 25 countries whose works reflect on the past and the present of Busan are participating in the biennale.

“I was inspired by the scene of residential houses built along a hillside, which look as if they are waving in the sea,” Kim said of the title of the biennale. “Busan has a long history of people migrating from Japan, especially after 1876 when it became a treaty port, as well as Korean refugees coming during the Korean War (1950-53). In the 1970s, during the rapid industrialization period, many Koreans moved to the city looking for work.”

Though hillside houses have been built by those immigrants and refugees over time, the scenery of residential towns is gradually changing with skyscrapers and apartment buildings that have popped up along the beach, blocking the ocean view from the towns, said Kim, who was born and raised in Busan. 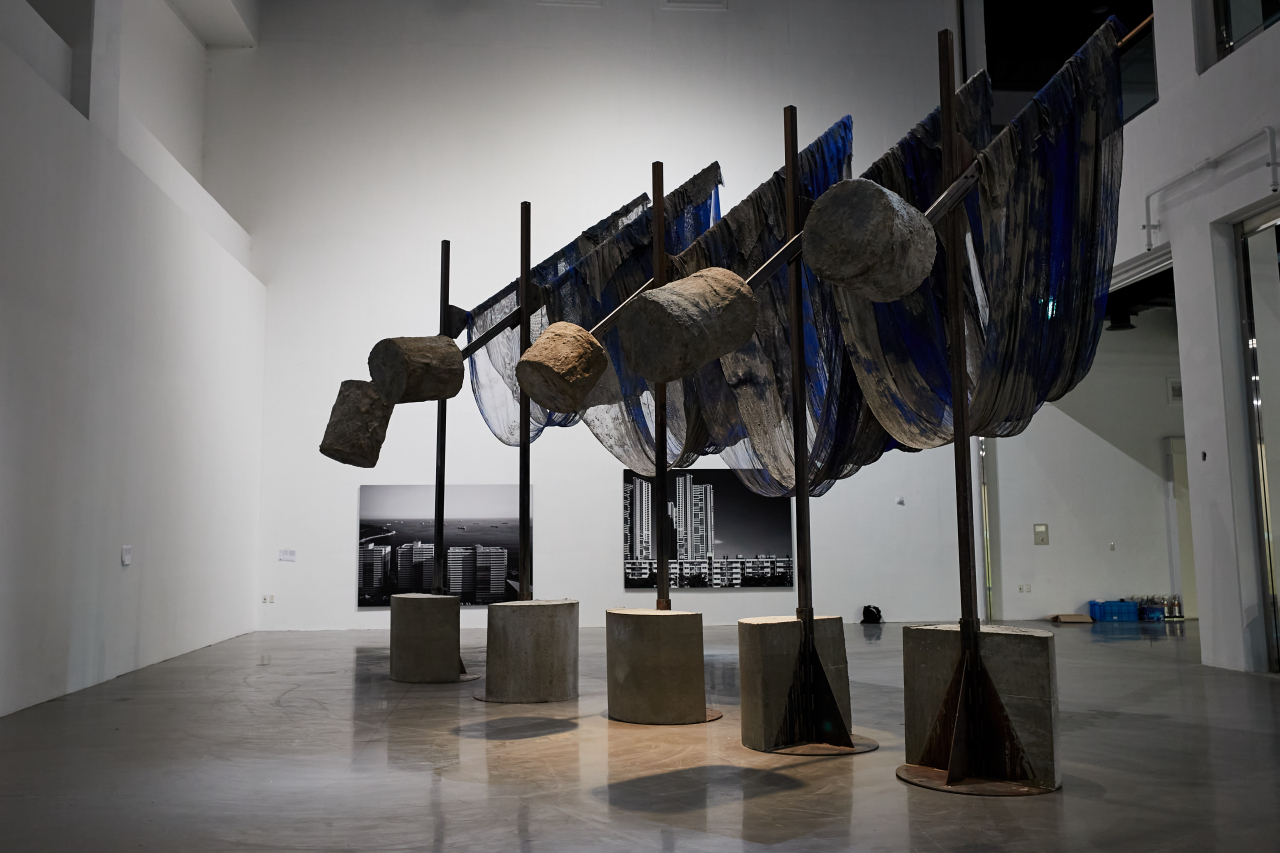 A negative view about this change in Busan’s scenery is well reflected in the exhibition venue at the Museum of Contemporary Art Busan, where the cityscape photography series by Lee In-mi is on display. The series documents the ever-changing architectural landscape of Busan, highlighting the emergence of perilous skyscrapers and high-rise apartment complexes throughout the city.

Facing Lee’s photography series is a large-scale installation by Phyllida Barlow that is reminiscent of a fishing net or a sea wave that greets visitors stepping into the exhibition. For the past 50 years, Barlow has been using rough and inexpensive industrial materials such as rebar, concrete, lumber and plywood to construct striking installations. For “Untitled: Bluecatcher,” newly created for the biennale, the artist dipped a fishing net in concrete and the draped it on steel columns.

About a 30-minute-drive from the museum is Pier 1 of Busan Port, a 4,000-square meter space, which once was a gateway connecting Busan to the outside world. The pier was completed in 1912 and served as a base for the Japanese invasion of China during the colonial era. Used as a storage space for decades, it has never been open to the public until the biennale. 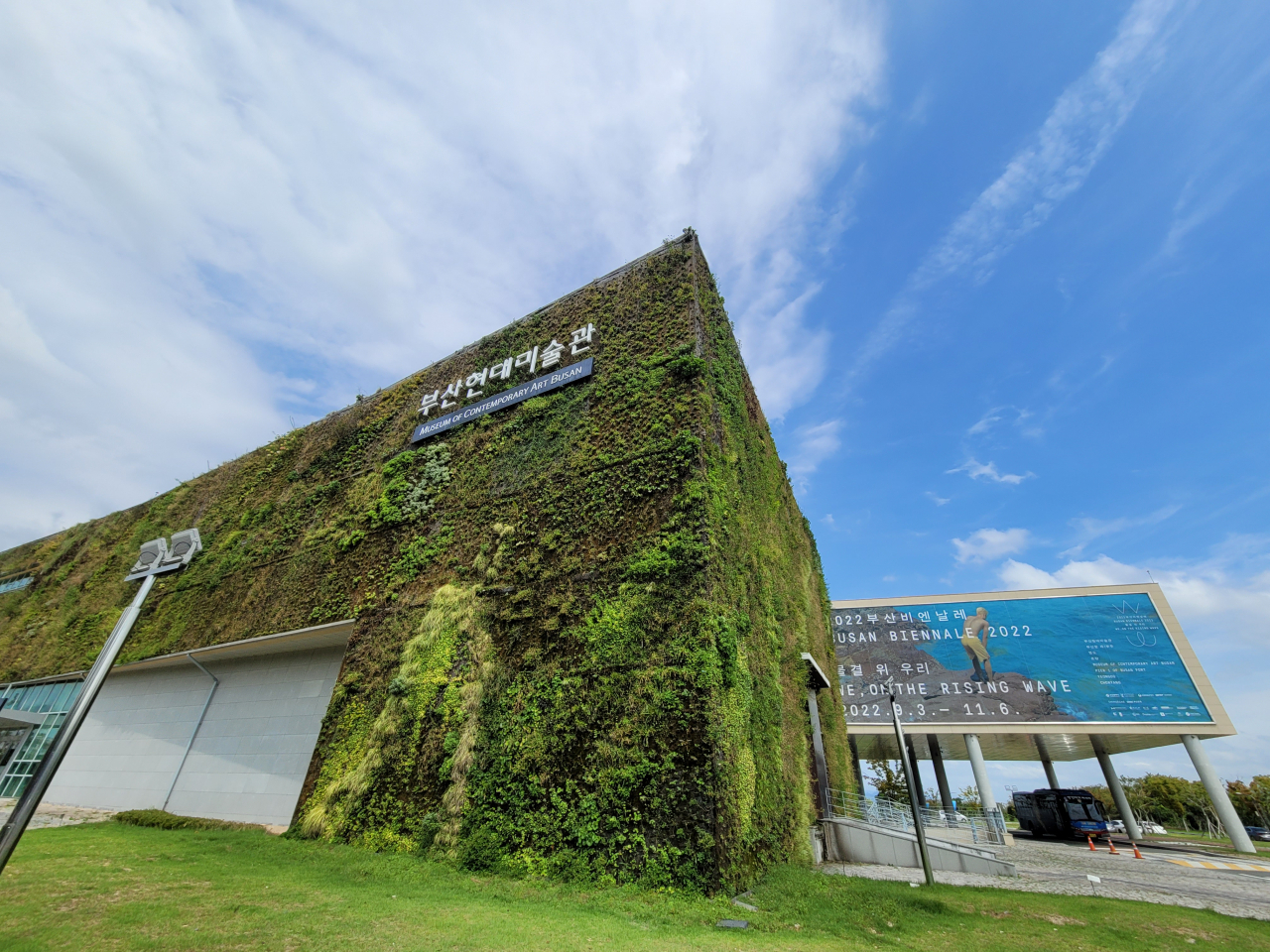 The installation work “Low Pressure” by Australian Aboriginal artist Megan Cope will come into sight upon arriving at the venue. Resisting the colonial concept of “Aborigine,” her work uses mapping practices and language to illustrate geographical locations that belong to her people and colonization's impact on the lands, waters and people over Australia’s long history.

Korean-born artist Lee Mi-re shows her installation work on Yeongdo. In a building once used by Songkang Heavy Industries Co., Ltd, a company involved in shipbuilding, the installation consists of a huge mass surrounded by porous shells which subsumes the architectural skin and skeleton of the building. The building’s roof and walls were destroyed by a typhoon, exposing the underlying framework.

The Busan Biennale opened on Sept. 3 and runs through Nov. 6, and includes artist talks and lectures by 17 artists at the Museum of Contemporary Art Busan.