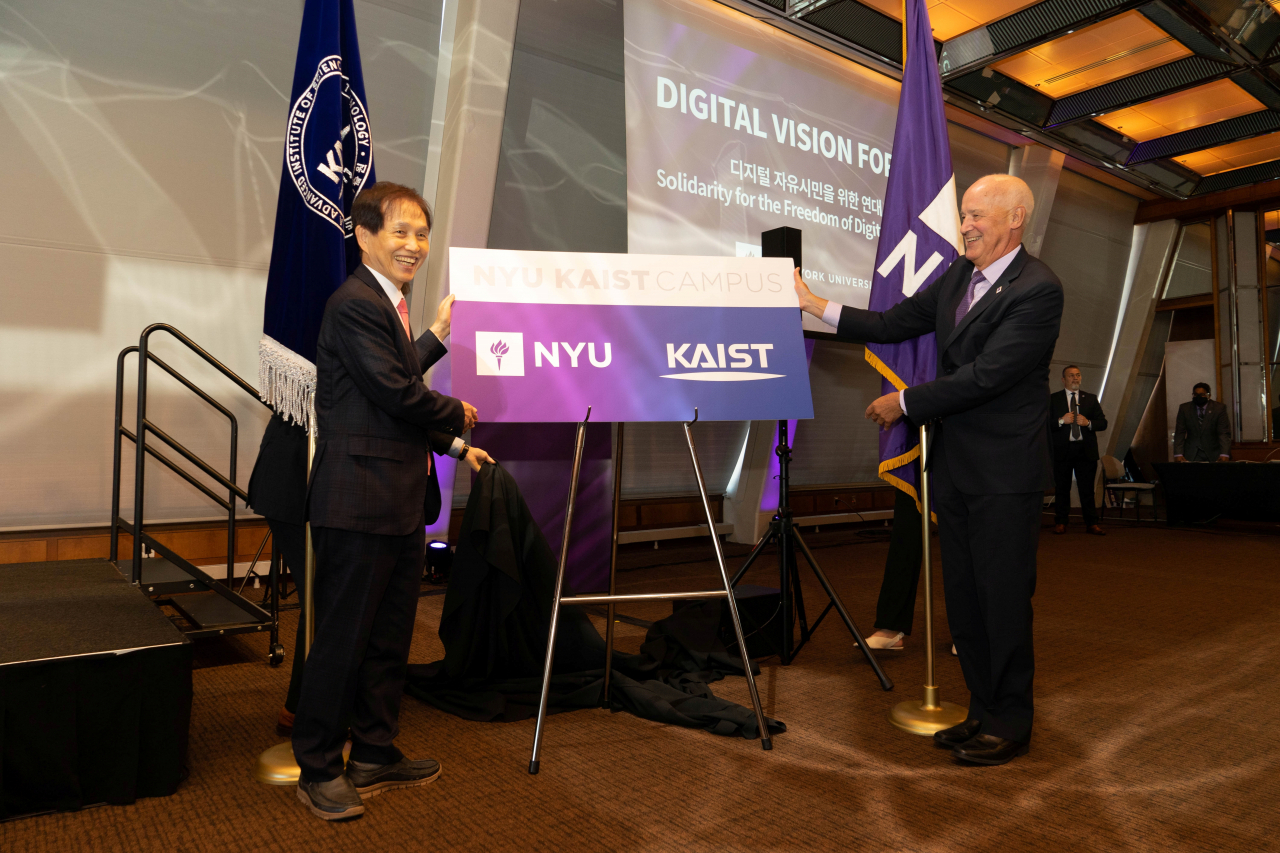 Lee Kwang-hyung (left), president of KAIST, poses for a photo with Andrew Hamilton, president of NYU, as they unveil the signage to mark the opening of their joint campus in New York City on Wednesday. (KAIST-NYU)

Korea Advanced Institute of Science and Technology and New York University have unveiled the official signage of their joint campus to mark the beginning of a new global academic partnership, KAIST announced Thursday.

Under the partnership, the two universities will begin joint research in the first half of next year with a focus on artificial intelligence, convergence neuroscience, biomedical engineering, cybersecurity, next-generation wireless communication and sustainability. The schools also have begun discussions on establishing a new integrated engineering program for undergraduate courses.

“The integrated engineering courses being discussed now will provide unique education that cannot be found anywhere else by utilizing the two institutions’ original strengths,” said Lee Kwang-hyung, president of KAIST.

“KAIST will contribute to New York City’s scientific technology research and creating jobs in the field of technology by using the global city’s advantages, leading the revival of Silicon Alley,” he added.

The signage unveiling ceremony came after the two sides signed a memorandum of understanding to establish a joint campus in June.

Both institutions have designated offices for their future joint research efforts. The collaborative space at NYU will be offered at One Metrotech Center, where NYU’s engineering, technology, new media and arts corridor is located in Brooklyn. KAIST will provide offices for NYU personnel on its campus in Daejeon.

“We see great potential in the opportunities to collaborate on the development of courses, research, cutting-edge technologies, entrepreneurship initiatives and industrial partnerships, and exchanges,” said Andrew Hamilton, president of NYU.

KAIST said it is reviewing plans to upgrade the joint campus to a “KAIST New York Campus” in the future. In order to make it happen, KAIST will take necessary steps such as conducting feasibility studies and seeking approval from the board of directors. According to NYU, the South Korean university has set its eyes on establishing a New York campus by 2025.

On the sidelines of the joint campus’ establishment, KAIST signed a memorandum of understanding with the New York City government. KAIST said the school partnership with the city government will serve as a bridgehead that will offer a chance to students, faculties and startups to enter the global stage.

“We have worked closely with KAIST to develop strategies for increasing their presence and investments in New York. This is the start of a relationship that I am confident will bring even more academic, business and technological opportunities,” said New York Mayor Eric Adams.