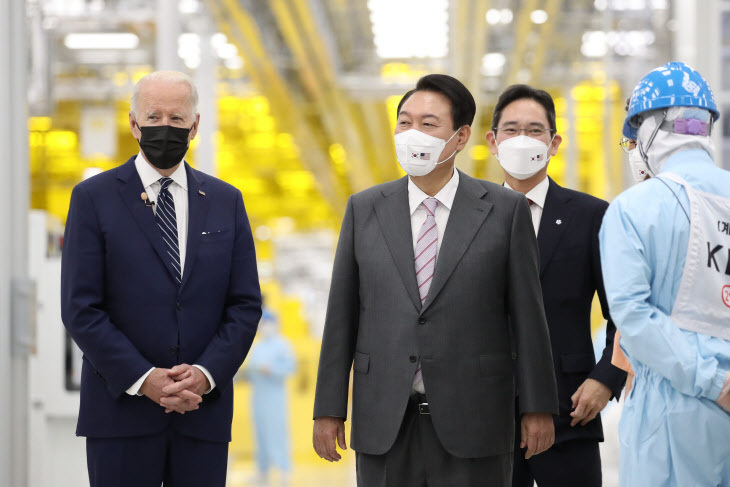 US President Joe Biden (left) and South Korean President Yoon Suk-yeol (center) look around a Samsung Electronics chip plant in Pyeongtaek, 65 kilometers south of Seoul, on May 20, 2022, guided by Lee Jae-yong, the de facto leader of Samsung Group and Samsung Electronics vice chairman. Biden arrived in South Korea that day for his first visit to the country since he took office. (Yonhap)
With the first meeting of the US-led “Chip 4” semiconductor alliance expected to take place before the end of this month, China appears to be closely monitoring its proceedings.

The preliminary meeting involving the US, South Korea, Japan and Taiwan is reportedly expected to take place early next week. In response, the Chinese ambassador to Korea met with a Korean lawmaker on Tuesday to reiterate Beijing’s opposition.

The Chip 4 alliance, also known as the Fab 4, was first proposed by US President Joe Biden, aimed at building connections with global chip powerhouses Korea, Japan and Taiwan.

With the US as a chips design powerhouse, and the other three countries having top capabilities in manufacturing and production of critical equipment and materials, the envisioned alliance would cover all major areas of the chips value chain.

In response, China has criticized the alliance as an entity aimed at containing China’s growing influence in the industry and opposed South Korea’s joining the grouping.

As it exports a major portion of its semiconductors to China, South Korea was reluctant to confirm its participation in the US-led alliance. The South Korean government has only said it will be attending the preliminary meeting and has not yet settled on whether to permanently join the group. However, its participation is highly likely.

In an interview with the New York Times this week, South Korean President Yoon Suk-yeol said the Chip 4 alliance is “necessary” for the four countries to closely communicate on the semiconductor industry. 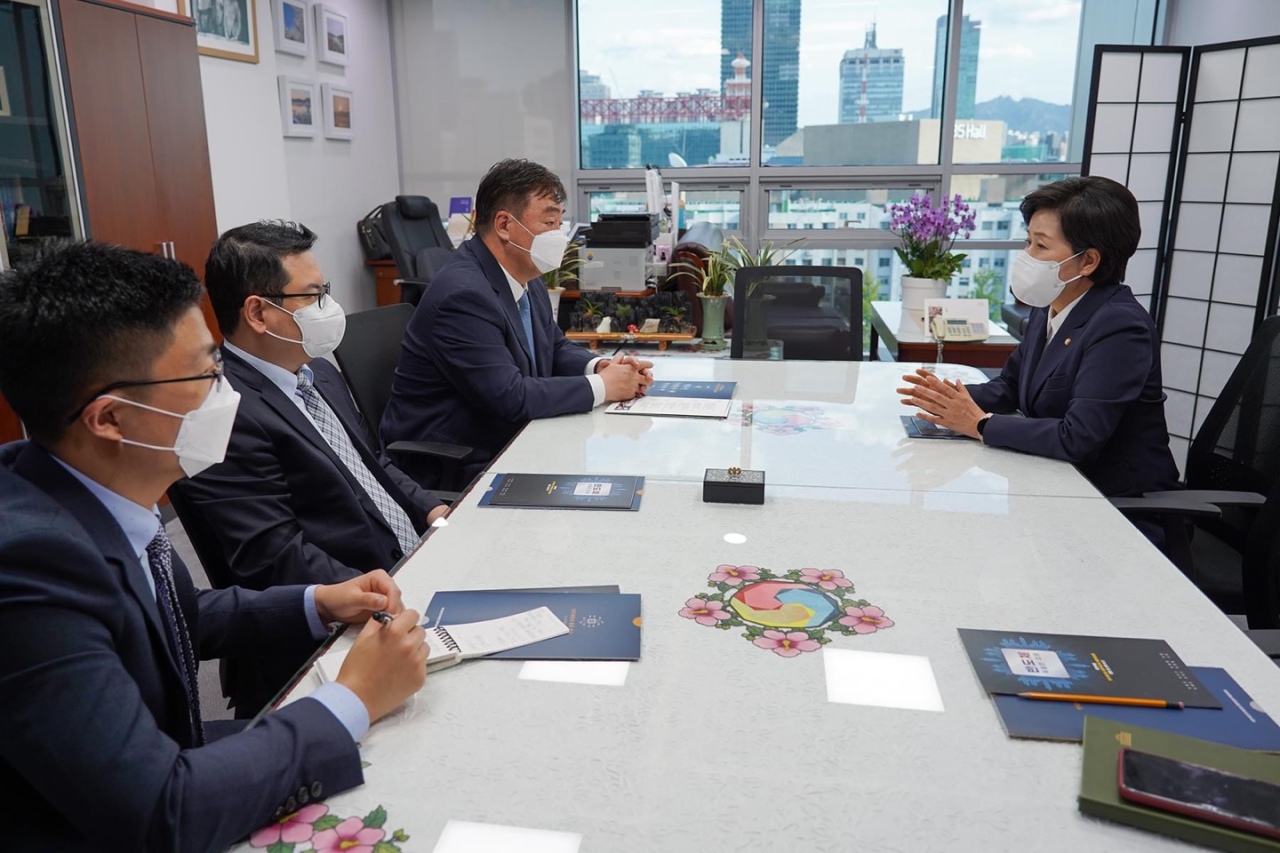 Chinese Ambassador to South Korea Xing Haiming (left) and Rep. Yang Hyang-ja, a former member of the Democratic Party of Korea and currently an independent member of the National Assembly, speaks in Seoul on Tuesday. (Rep. Yang's Facebook)
As the discussion on launching the semiconductor alliance is set to kick off, Chinese Ambassador to South Korea Xing Haiming met with Rep. Yang Hyang-ja, a Samsung Electronics executive-turned-lawmaker, for the second time on Tuesday to discuss cooperation between Seoul and Beijing in semiconductors.

According to Rep. Yang, Xing expressed concerns about Korea’s joining of the Chip 4 alliance. Yang responded that the joining of the US-led semiconductor grouping is “not a matter of choice” for South Korea.

“I explained to Ambassador Xing that because South Korea is heavily reliant on the US, it cannot (refuse) to participate when the US says it wants to establish a semiconductor consultative group,” Yang said in a Facebook post on the next day of her meeting, Wednesday.

In Tuesday’s meeting, Yang said she found a slight change of stance in Xing. He was more interested in the trajectory of the Chip 4 alliance compared with their previous meeting in July, when Beijing was more vocal of its opposition.

At the same time, she reaffirmed with Xing that South Korea’s strategic partnership with China is also an important interest, as the technology and industry value chains of the two countries are closely linked.

In their first meeting on July 26, Xing told Yang that China is “willing to work with South Korea to adhere to the principle of a fair and just market, eliminate external interference, strengthen cooperation in semiconductors and other fields, and jointly maintain the stability of the global industrial chain and supply chain," according to a statement on the official WeChat account of the Chinese Embassy in South Korea.