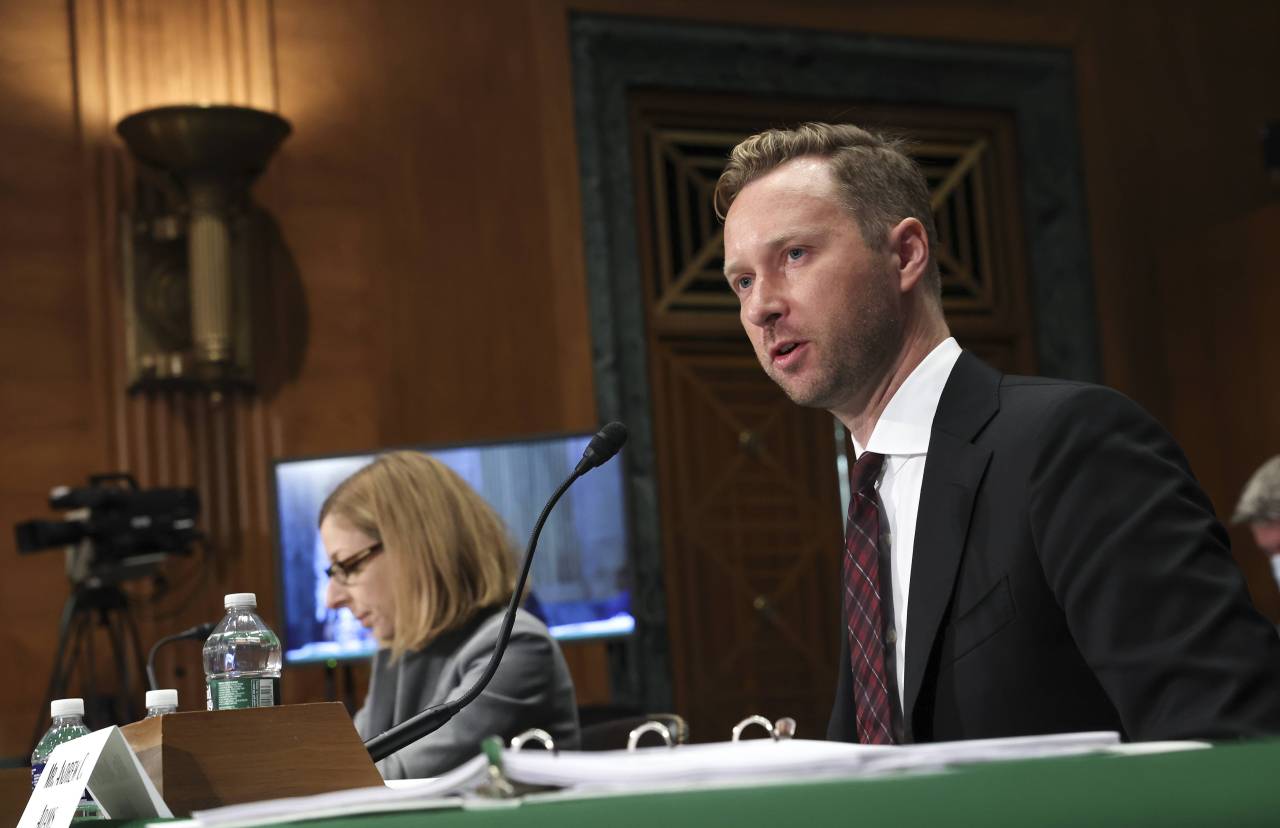 Andrew Adams (R), Director, Task Force KleptoCapture at the US Department of Justice, and Elizabeth Rosenberg, Assistant Secretary For Terrorist Financing And Financial Crimes at the US Department of Treasury, testify before the Senate Banking, Housing, and Urban Affairs Committee on Russian sanctions, on Capitol Hill, September 20, 2022 in Washington, DC. The Committee held the hearing to discuss additional sanctions against Russia for its invasion of Ukraine. (Kevin Dietsch/ AFP via Getty Images)
The United States will respond to arms supplies by North Korea and Iran to Russia with further sanctions to block Russia’s efforts to evade economic sanctions to illegally replenish its depleted stocks of weapons, senior US government officials said Tuesday.

At a congressional hearing, US senators and senior officials at the Treasury and Justice departments took note of Russia’s pursuit to procure military equipment for its troops in Ukraine from the cash-strapped countries subject to UN sanctions.

“Struggling to import a host of industrial goods and technology, Russia has been forced to cannibalize its domestic industry to assemble battlefield hardware it can no longer buy from responsible countries,” Elizabeth Rosenberg, Treasury assistant secretary for terrorist financing and financial crimes, said before the Senate Banking Committee hearing on Russia sanctions.

“Russia has been forced to turn to outdated equipment and approach global pariahs like North Korea and Iran to source the tools to fight,” she said, adding Russian soldiers on the front lines of the war in Ukraine do not have access to the most modern warfighting equipment.

This month, the US State Department publicly confirmed that the Russian Ministry of Defense was in the process of “purchasing millions of rockets and artillery shells from North Korea for use in Ukraine.”

Rosenberg said Russia’s outreach to Iran and North Korea to source depleted military equipment are “important indicators” that show the efficacy of the US policy approach of imposing and enforcing sanctions and export controls targeting Russia.

Andrew Adams, director of Task Force KleptoCapture at the Justice Department, also pointed out that Iran, North Korea and Russia have the common goal to bypass Western sanctions. The war in Ukraine has created opportunities for them to become closer, he added.

Rosenberg also pointed to the necessity to stop Russia from exploiting loopholes by levying sanctions against entities that are involved in arms supplies to Russia.

“It is certainly a violation of sanctions when entities in Iran or North Korea supply Russian-designated entities with military equipment,” Rosenberg told members of the Senate Banking Committee.

This month, the US Treasury Department imposed sanctions on Iranian companies that were tied to providing Unmanned Aerial Vehicles or UAVs to Russia for its war in Ukraine.

“Our approach here will be to continue to impose sanctions to hold accountable those suppliers for Russian designated entities,” Rosenberg said.

Rosenberg underlined that imposing sanctions on the entities is a “significant priority” for the Treasury Department to prohibit Russia from resupplying its force fighting in Ukraine.

The Biden administration has been keeping close tabs on Russia’s turning to pariah states including North Korea to seek their military support and its move to step up cooperation with China.

In keeping with Russia, North Korea has sought to show off its triangular alignment with China and Russia as the US has faced more intensifying conflict with the two countries in the aftermath of the conflict in Ukraine.

North Korea has stepped up its criticism of the US Biden administration’s initiative to deter Russia’s aggression against Ukraine and rally its allies to counter China’s growing influence in the Indo-Pacific region.

In a recently updated report, the US Congressional Research Service also pointed out that the US competition with China and Russia could create conditions conducive for North Korea to pursue military and nuclear buildup without resistance from China and Russia.

“Perceptions of a trend toward an international system of zero-sum competition between two blocs -- the United States and its allies and partners on one side, and China and Russia on the other -- could embolden North Korea,” the CRS said in the report.

“Kim may conclude that if he uses the country’s nuclear weapons and missile programs to coerce concessions from Seoul, Washington, and/or Tokyo, China and Russia would not take punitive actions against North Korea and may even provide economic assistance to preserve the DPRK’s regime stability, similar to how they supported North Korea during the Cold War.”

North Korean leader Kim Jong-un underscored that North Korea and China can “develop their strategic relations to a new and higher level unceasingly” despite the “hostile forces’ heinous scheme to isolate and blockade” the countries, in a letter sent to Chinese leader Xi Jinping on Monday, the state-run Korean Central News Agency reported Wednesday.