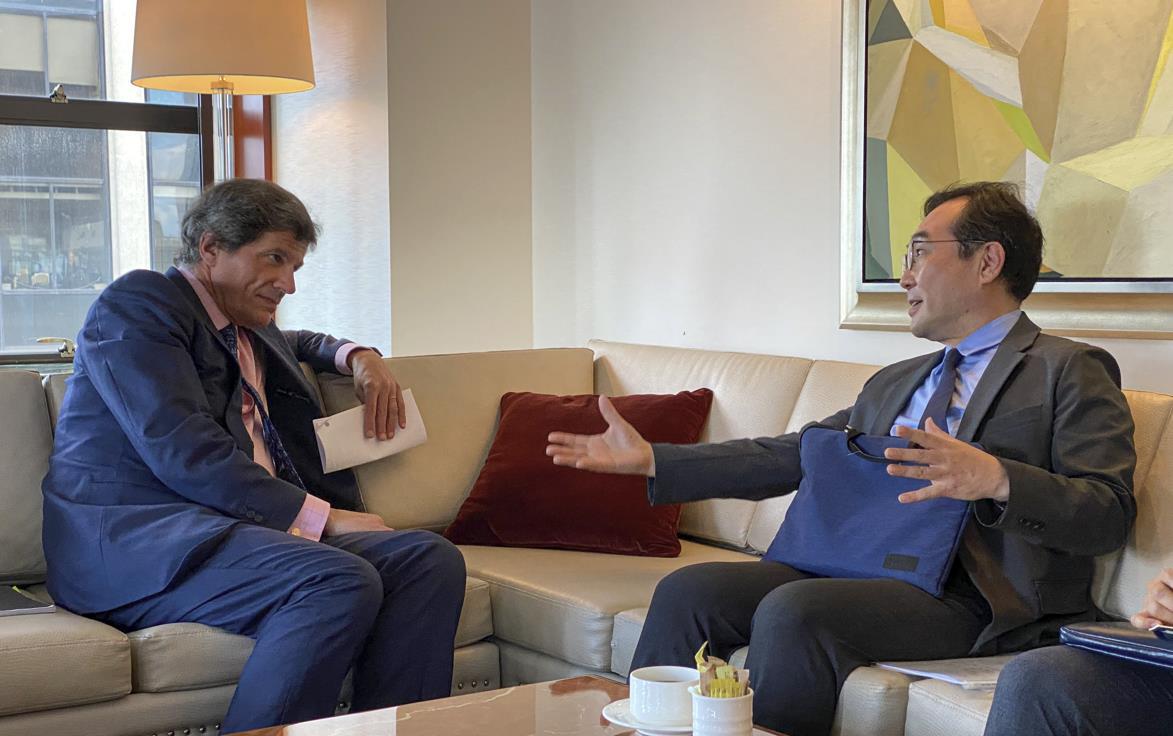 South Korean Second Vice Foreign Minister Lee Do-hoon met with Jose Fernandez, the under secretary for Economic Growth, Energy, and the Environment of the US State Department hold a bilateral talk in New York on Tuesday. (Yonhap)
Washington said it is reviewing "all possible measures" to address Seoul's concerns regarding the US' Inflation Reduction Act hurting Korean electric vehicle makers, and reaffirmed that it will maintain an open channel for communication, South Korea's Foreign Ministry said Wednesday.

On Tuesday (US time), South Korean Second Vice Foreign Minister Lee Do-hoon met with Jose Fernandez, the under secretary for Economic Growth, Energy, and the Environment at the US State Department to discuss on a series of pending issues, including the impacts of the IRA on Korean industries.

Lee is in New York on the occasion of the UN General Assembly, of which President Yoon Suk-yeol is also in attendance.

In the meeting, Lee proposed a number of options the US government can take to adjust the protectionist provisions of the IRA, such as providing tax credits to only the electric vehicles manufactured in North America. South Korean automakers, mainly Hyundai Motor and Kia, have lost the tax credits in the US, as they build their flagship EVs in Korea.

To the concerns raised by South Korea, Fernandez responded that the US is reviewing "all possible measures" and said the government will maintain an open channel of engagement with Korea to address the issue, according to the Korean Foreign Ministry.

In a press release, the US State Department also said the under secretary "reiterated the United State's commitment to maintaining open channels of engagement with the ROK on the US Inflation Reduction Act, as the United States works to implement the landmark legislation." ROK is the acronym of the official name of South Korea, Republic of Korea.

The two sides agreed to maintain close communication for strong cooperation in building resilient supply chain in industries including semi-conductor and strategic materials, and also on investment and bioeconomic initiatives.

According to the State Department, Fernandez also highlighted Korea's "significant" and "growing" investment in the US, which support their shared goals of economic prosperity, clean energy and supply chain resiliency.

They also discussed ways to work together to address other key challenges, including joint efforts on climate change, and opportunities to deepen cooperation in the Indo-Pacific.

They are to continue with their negotiations during the seventh US-ROK Senior Economic Dialogue when Fernandez visits Seoul, Seoul's Foreign Ministry said.

Lee also met with Daniel Kritenbrink, Assistant Secretary of State for East Asian and Pacific Affairs at the State Department on the same day to exchange opinions on a series of pending issues involving the UN General Assembly, multilateral cooperation, cooperation with Pacific islands, and the Ukraine crisis, among others.

The governor of Maryland Larry Hogan on Tuesday sent a letter to US President Joe Biden urging federal action to address provisions of the IRA that "hurt consumers and threaten access to electric vehicles."

He visited Seoul from Sept. 13 to Wednesday, during which he met with President Yoon, the foreign minister and other business figures.

While acknowledging the president’s efforts for the US’ manufacturing capability and supply chain stability, Hogan said, “I am troubled by your administration’s decision to double down on trade policies favored by former President Trump that threaten American jobs and ultimately raise prices for American consumers.”

“While onshoring is rightly our priority, friendshoring is an essential component of strengthening economic ties among the free world and combating dependence on Chinese goods.”

Explaining that 70 percent of the current EV and plug-in hybrids on the US market are no longer eligible for the tax credits given to their buyers, he said it not only impedes the widespread of adoption of EVs, but also hurts the development of renewable energy sources.

“I understand that the IRA was fast-tracked in an election year environment and there is unlikely to be any legislative changes with just seven weeks until the midterm election," he said.

"However, I am confident that there are actions the executive branch can and should take to address our allies’ concerns including delayed implementation, regulatory modification and development of waivers.”

Governor Hogan is married to Korean American Yumi Hogan. He donated $250,000 for the construction of the Wall of Remembrance in Washington which is dedicated to US soldiers and members of the Korean Augmentation of the US Army killed during the 1950-53 Korean War.

He was named the first veterans affairs minister in South Korea by the Korean Veterans Ministry on Sunday.