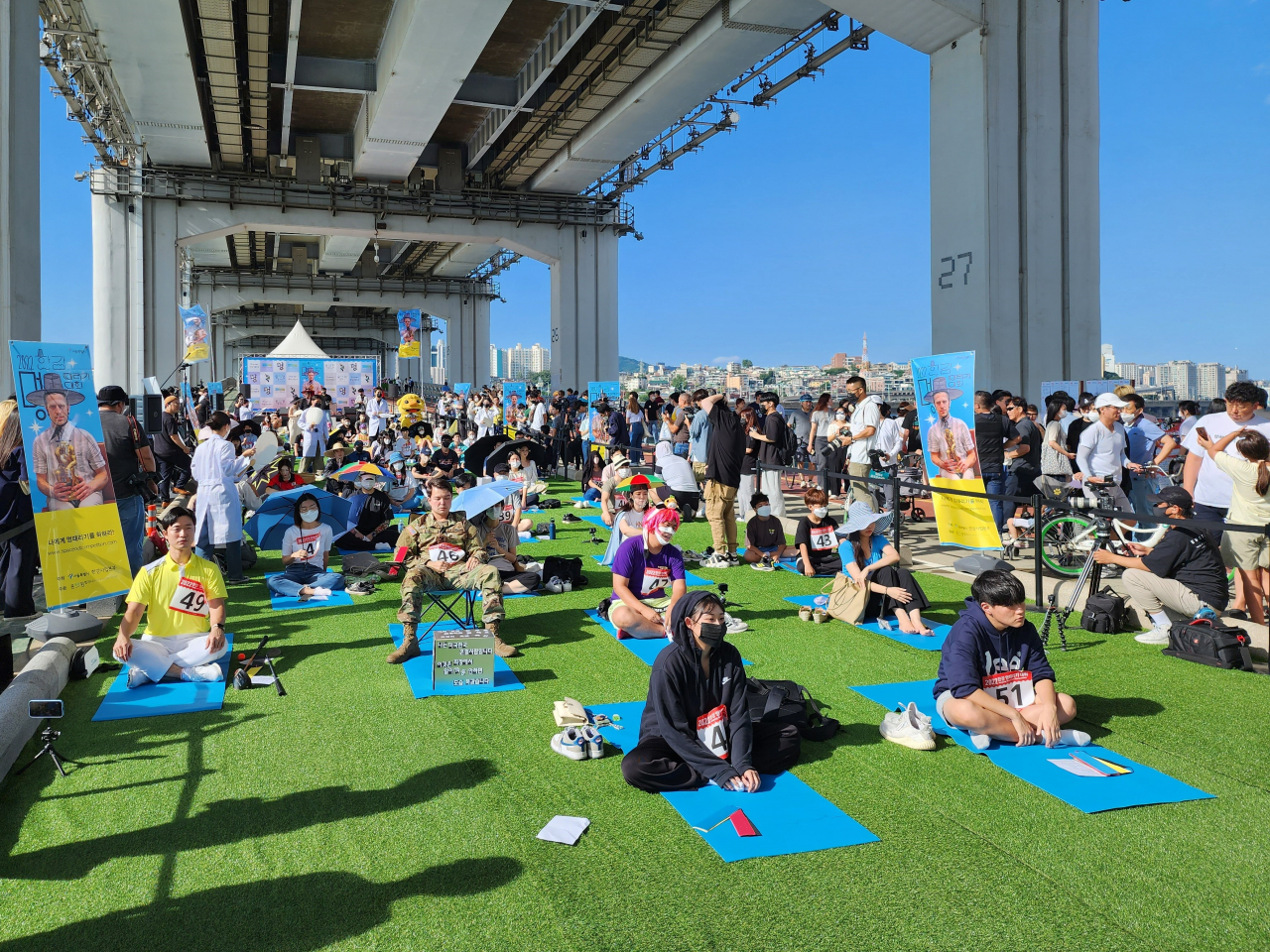 As Banpo Bridge’s Moonlight Rainbow Fountain spouted streams of water, heads turned at the splashing sound that seemed to signal the start of a long-awaited space-out competition taking place on Jamsu Bridge, right under Banpo Bridge.

The Hangang Space-out Competition returned Sunday after a two-year hiatus. About 4,000 people signed up for the 50 spots available -- up to three people were allowed for each spot -- and not a single selected team failed to show up at Jamsu Bridge, which is closed off to traffic on weekends. 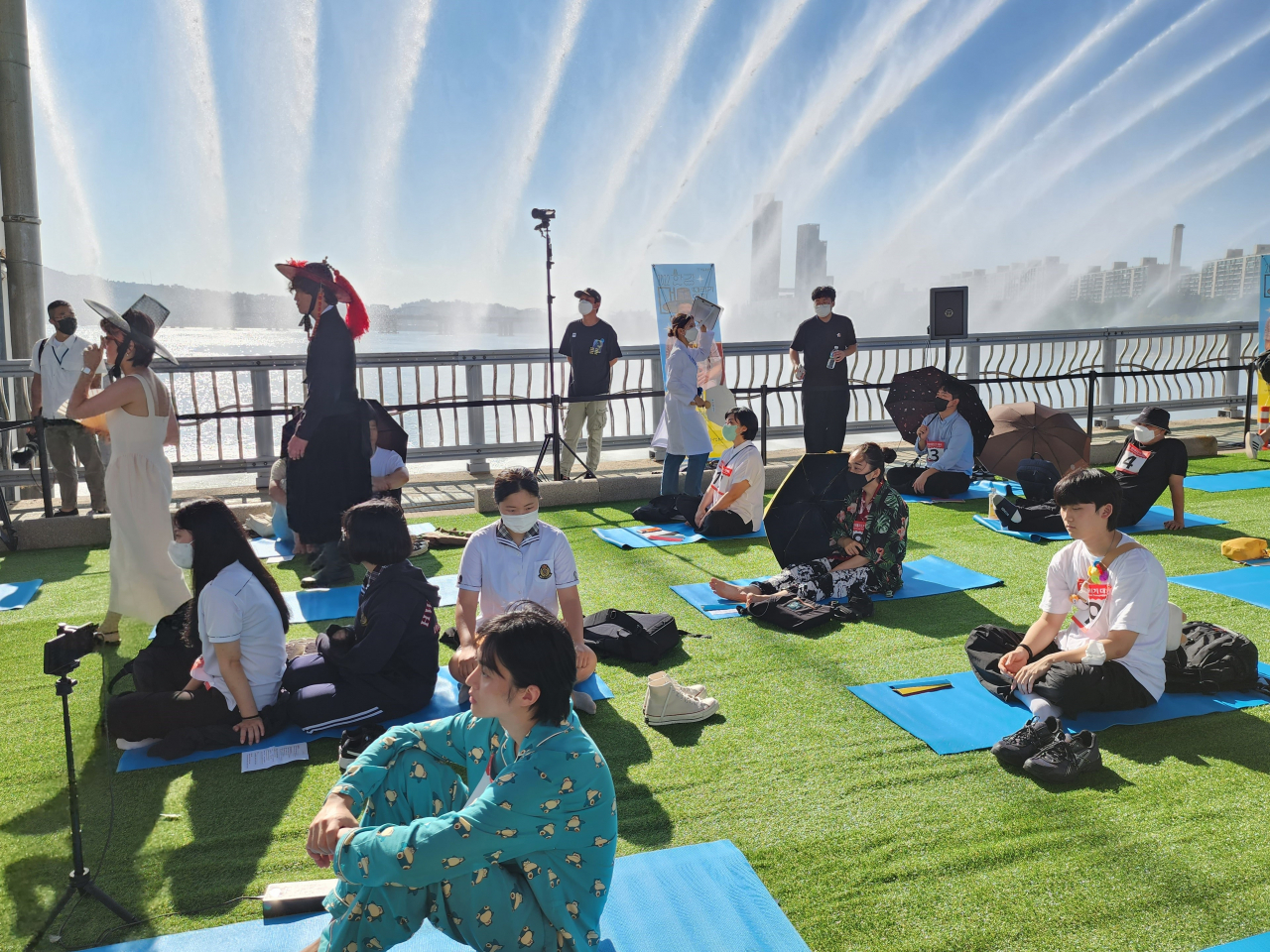 The players were selected taking into consideration their field of work, according to the organizing committee. It was easy to guess some of the participant’s jobs: Player 46 came dressed in a US military uniform, the family of three that made up Player 8 were in police uniforms, Players 11 and 23 wore school uniforms. Posing with a toy pony, Player 6 said she was a horse trainer while a team of two, Player 36, wore t-shirts printed with the word “unemployed.”

With spectators on-site voting on the “artistic performance,” many participants sought to draw attention with eye-catching costumes. Player 47 wore a hot pink wig, while Player 4 participated in a full Haechi costume, a representative character of Seoul city. 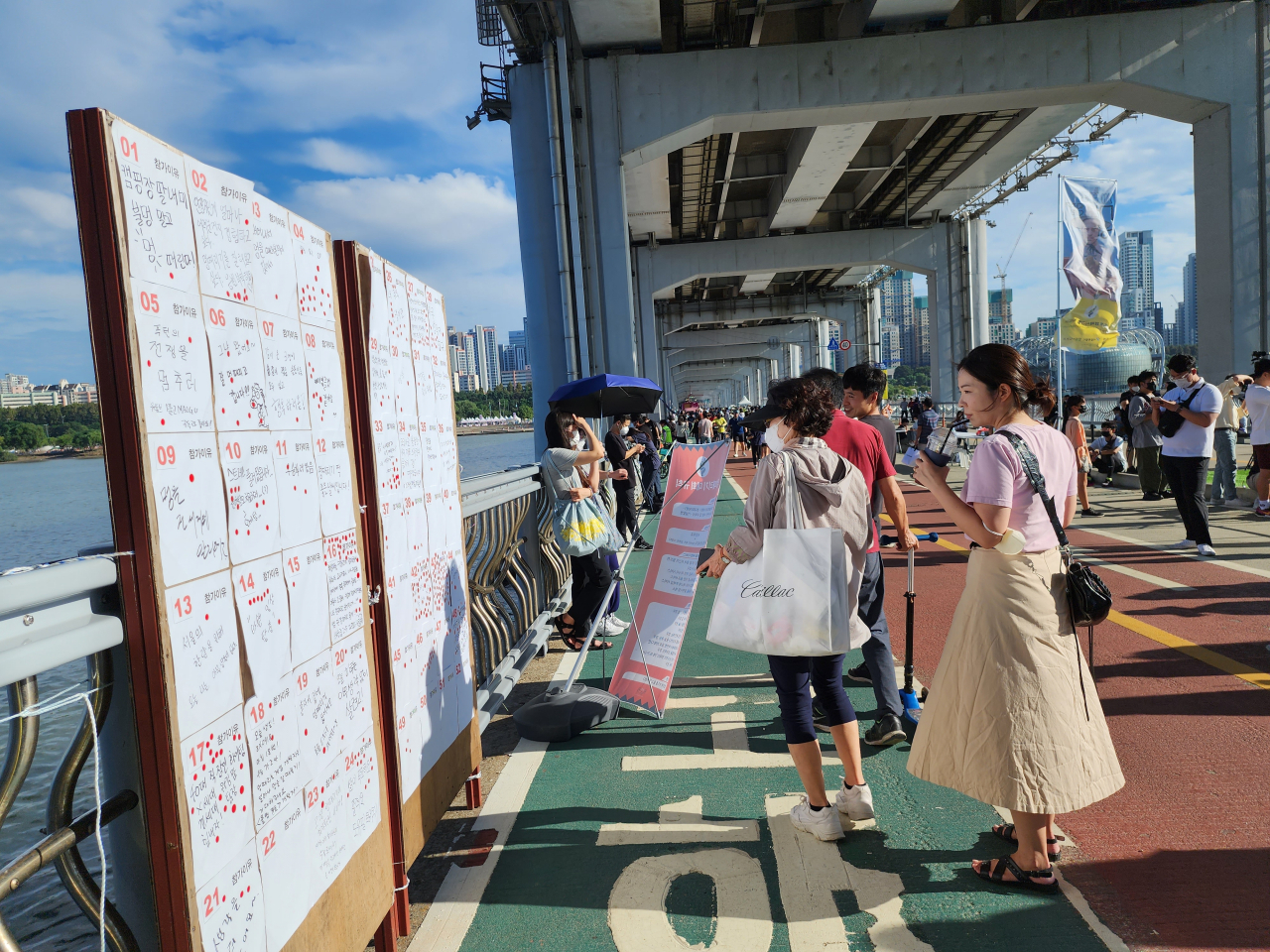 A panel next to the venue showed each player’s reason for taking part. Player 42, actress Uhm Hyun-kyung, had written “This is what I’m best at,” while two elementary school children, Player 43, had written that they “thought it would be fun.” The two players garnered the most on-site votes.

Many players came prepared for the scorching sun, bringing umbrellas and hats. But halfway into the competition, several players gave up, citing the hot weather. Some held up blue cards for water and yellow for fanning by staff. A couple, Player 36, who withdrew, said the sun and heat made it more difficult than it looked.

After 90 minutes of struggling against the sun, the top three winners were announced based on heart rate data measured every 15 minutes and the on-site vote. 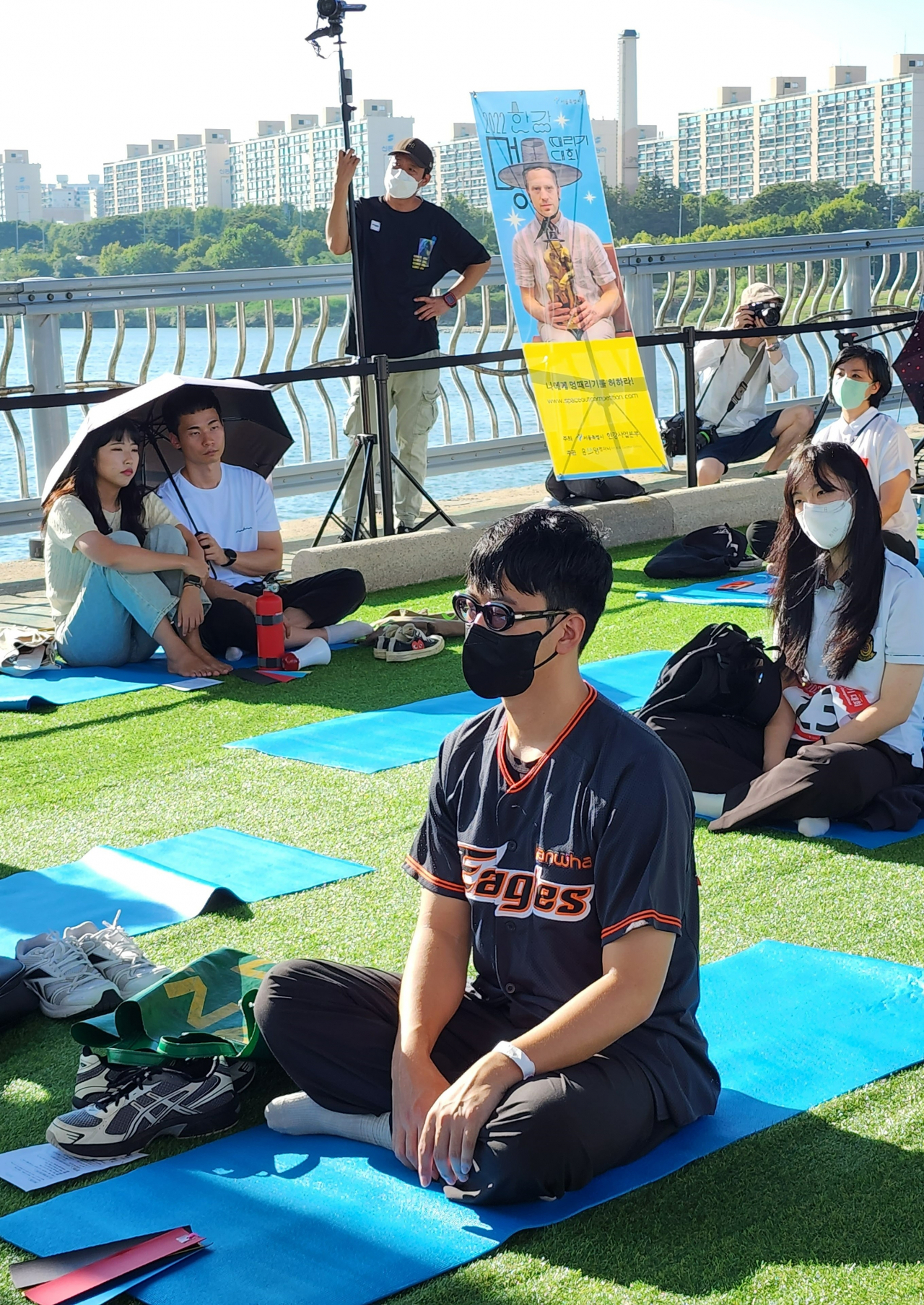 Player 27, a fan of the professional baseball team Hanwha Eagles and wearing the team uniform, took the first prize.

“It wasn’t too difficult. I’ve been a Hanwha fan for 10 years, so I spaced out like how I usually space out while watching the games,” said Player 27 after winning the competition. “I hope the players finish the season without injuries,” he added.

The Hanwha Eagles have stayed in the lower ranks of the Korean baseball league for over a decade, except in 2018. In 2020 and 2021, Hanwha ranked at the bottom out of 10 teams.

Player 28 grabbed the second place and Player 46 in the US military uniform won third place, while the special award went to Player 4 in the full Haechi costume. 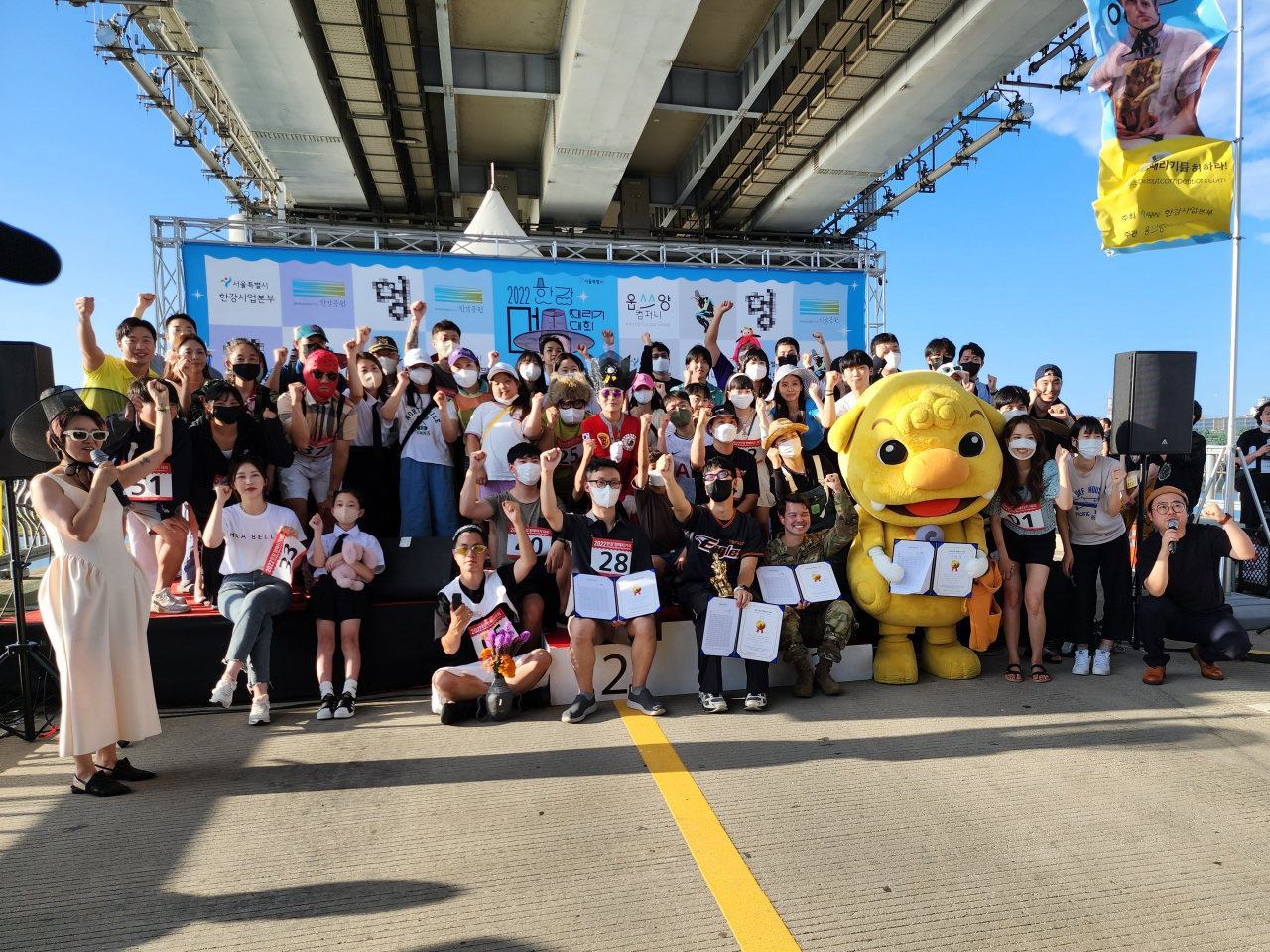 Participants and the winners of the Hangang Space-out competition pose for group photos at Jamsu Bridge in Seoul, Sunday. (Hwang Dong-hee/The Korea Herald)

In its 8th edition this year, the competition is hosted by the Seoul Metropolitan Government in collaboration with the event’s founder and performance artist Woopsyang, aiming to show people the value of resting.

“In the past, people were scolded and frowned upon for spacing out. But today, we need time to space out and rest because from the moment you wake up to the moment you sleep at night, people are bound to their phones and busy lifestyles,” Woopsyang said.