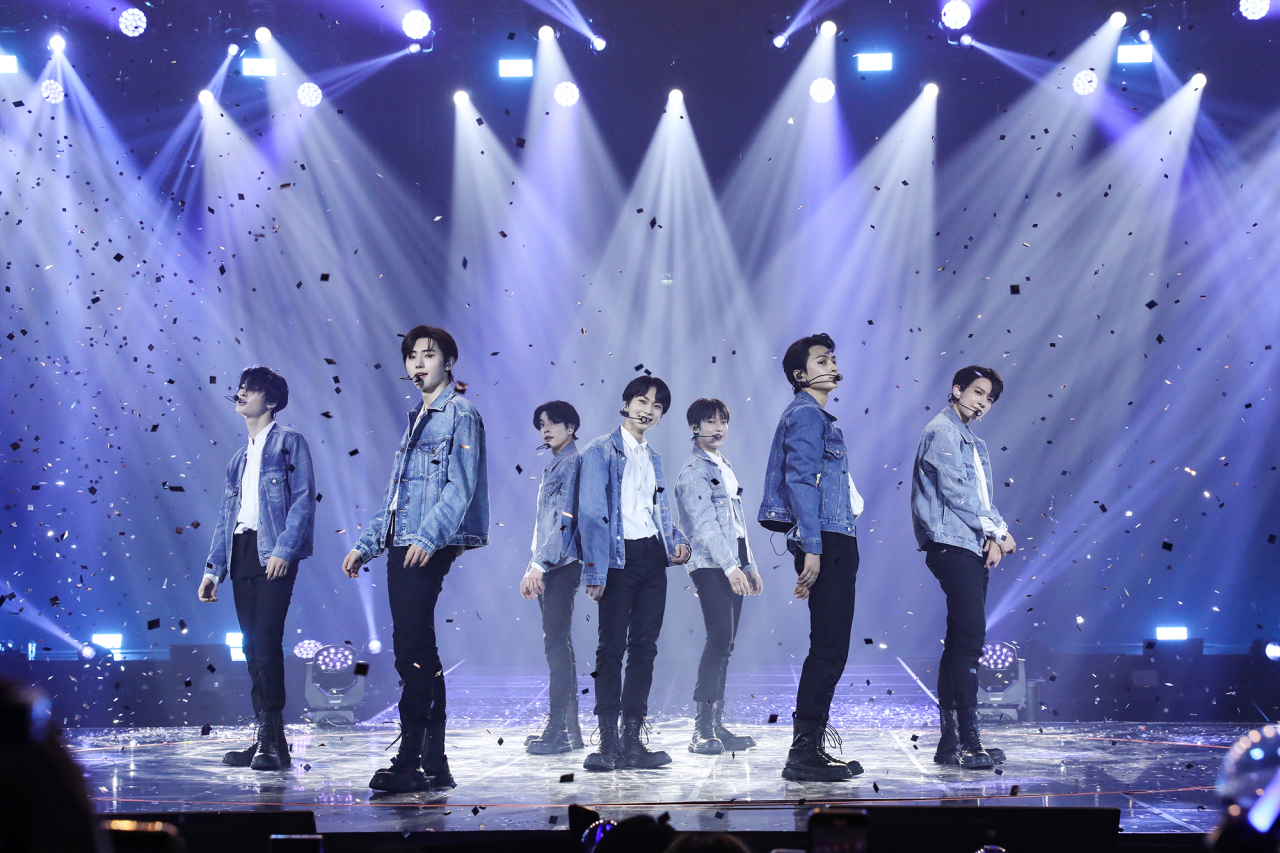 Like the way hyphens connect differently to make new meanings, Enhypen was formed in September 2020 through TV competition “I-Land.” True to their words, the boy band populated the 4,000-seat venue Saturday night to signal the start of its first world tour, “Manifesto.”

A sign in light-emitting diodes of “Enhypen World Tour Manifesto” beckoned Engenes, the group’s official fandom, who flocked to the SK Olympic Handball Gymnasium. And as the sold-out arena lights dimmed at 6 p.m., visitors bristled with excitement, while colorful light sticks and boisterous fan chants filled the two-story venue, signaling the moment they had yearned for.

Saturday’s concert was a jam-packed two-hour surprise. The seven bandmates ran through a breathless 16-song set that drew from their biggest hits and prepared two encore performances to bring joy to fans.

Under the spotlight, Enhypen opened the first of its two days of live sessions in Seoul by emerging from capsule pods. 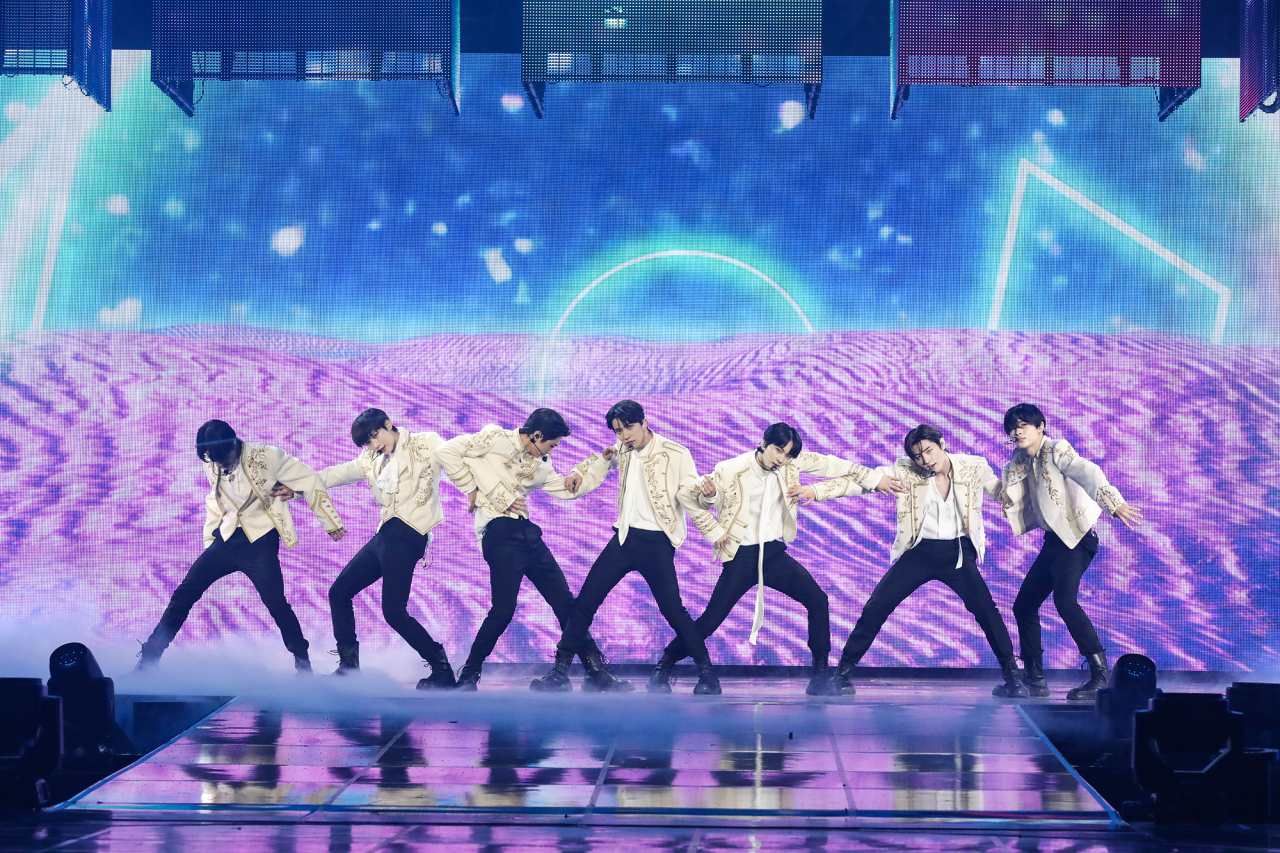 Enhypen stormed onto the stage and quickly opened with “Walk the Line” and “Given-Taken.” Decked out in white shirts and blazers above black pants and boots, the seven bandmates came out to what was likely the loudest fan chant the band has experienced since its debut.

As the second introduction song headed to a climax, strobe lights and pyrotechnics came out, adding more vivacity to the night. The concert then turned into a majestic nocturnal splendor. “I think we’ve been looking for each other every day” came out of Jake's microphone, and purple lasers beamed through the venue as the music for “Flicker” came up.

After the gig ended, Jung-won took the microphone to greet Engenes. “Welcome to Enhypen’s first world tour,” he called out to fans in person for the first time in two years. 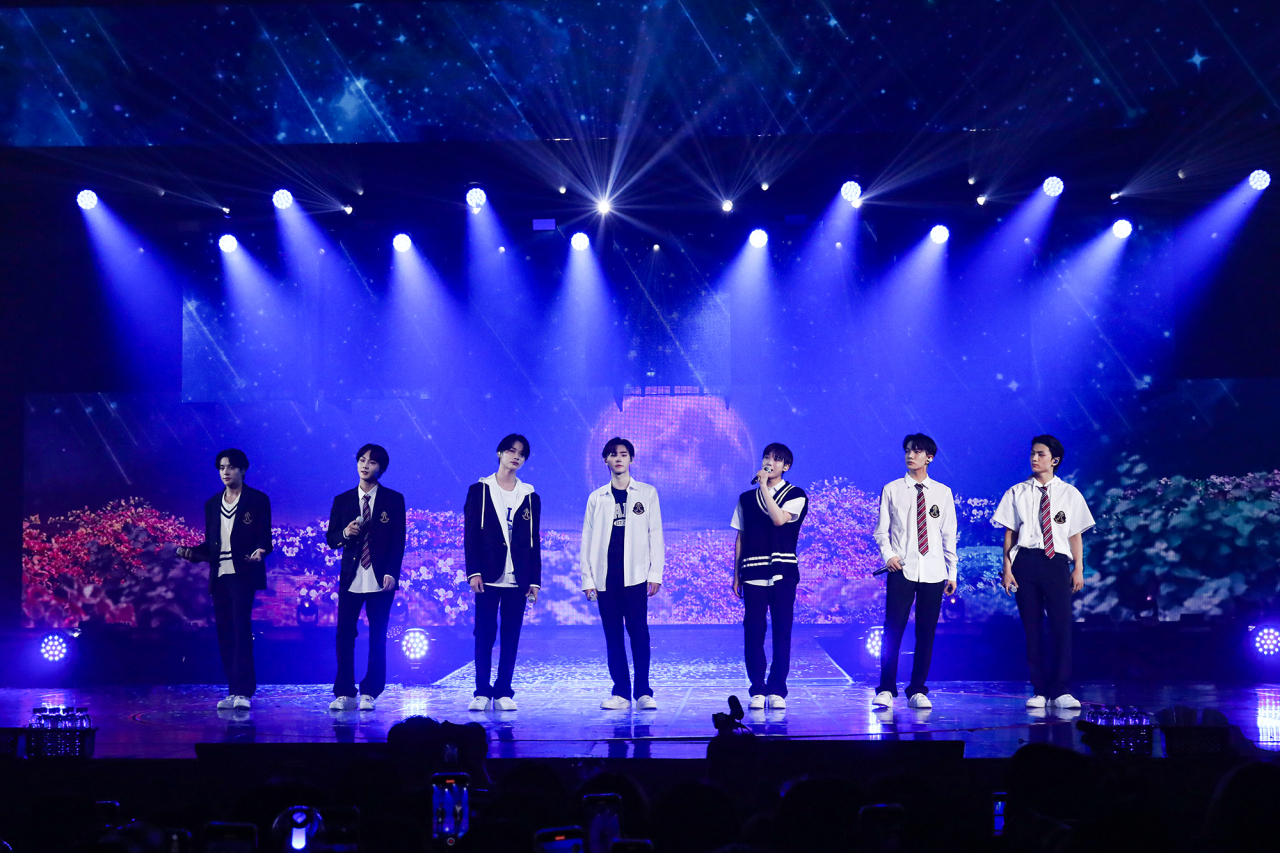 “Today’s dress code is blue, but I just spotted an orange right here!” he grinned as well.

Now donning denim jackets, Enhypen shined as a collective and connected with fans through “Not For Sale + Let Me In (20 Cube).”

The genre-bending band transformed into heartthrobs for “TFW (That Feeling When).” When Ni-ki sang along to “Can’t Take My Eyes Off You,” spellbound fans were enraptured. And as the track hit the highlight, fans sang along to “that feeling when we” as confetti cannons blasted off.

Followed by a tender take on “Upper Side Dreamin’” and “Mixed Up,” Enhypen added a pinch of a romantic mood to the evening as the stage turned into California palm tree-lined streets.

The stage then became a haunted house for “Drunk-Dazed” as the band came out from the horror-like set wearing red shirts.

The rookie K-pop phenomenon continued to grab control of the spotlight with an exclusive “One In A Billion” performance and continued the spooky ambiance with Jake’s solo dance break at the end.

“I was a bit nervous about my solo stage, but I tried my best,” Jake smiled from ear to ear. 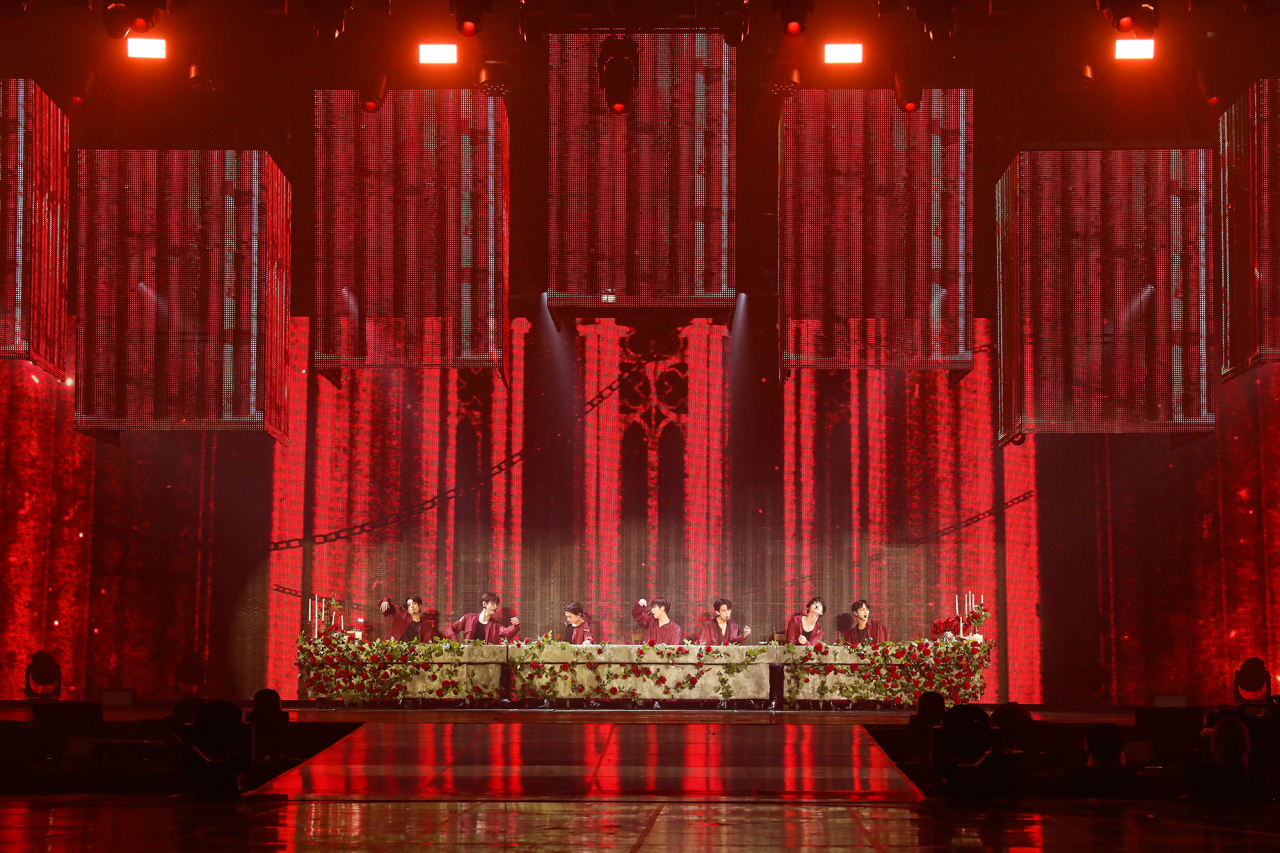 Fan chants continued in “Fever” as they called each of the bandmates' names -- an experience they had clearly missed during the pandemic.

The K-pop act turned back to high schoolers for “Attention, Please!” as they stepped to the stage in their school uniforms. Jung-won hinted that the band prepared something for Engenes around the globe, and the live session was indeed an attention-grabbing one.

The group teased a snippet of what its upcoming world tour would be like by livestreaming the performance on Weverse. One lucky fan got an autographed ball as part of Enhypen’s special event during the concert.

Later, the LED screen turned to a Polaroid theme as “It’s like a polaroid love” came from the speakers. The bandmates moved closer to fans in the standing area during “Polaroid Love” and “Just A Little Bit” to exchange eye contact. 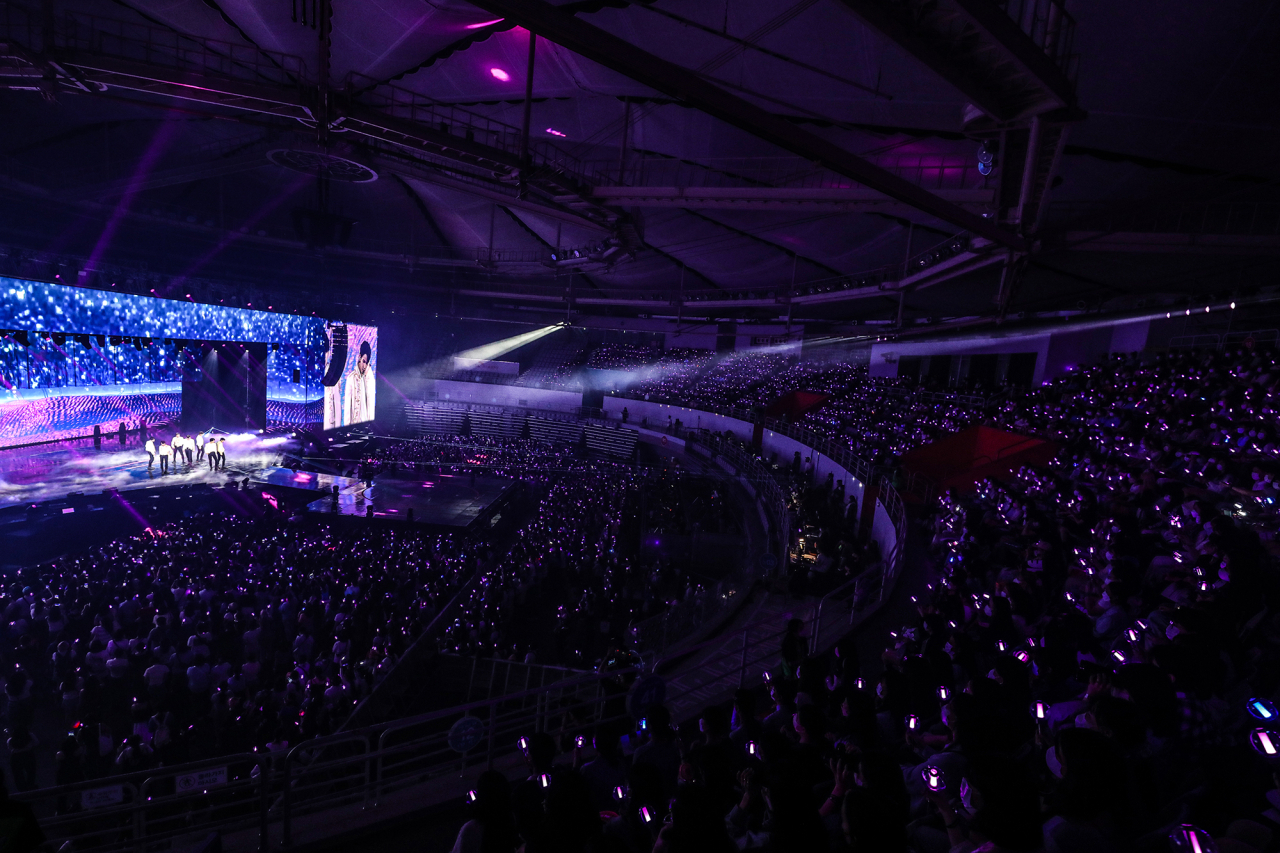 “There will be more opportunities where we’ll be able to sing in front of Engenes. Will you be with us?” Jake asked, to a resounding chorus of “Yes!”

“Do you have the energy to revel in our spirit?” Jung-won asked. The stage turned into a tennis court as Jake’s “We go” whistled the start of “Blessed-Cursed” and the band came up from the stage lift.

But Jung-won wanted more frenzy. Enhypen brought fans in sync through “Go Big or Go Home,” as Jung-won asked everybody to get up and jump. Main dancer Ni-ki was at the helm during the chorus as fireworks calibrated with the finely tuned choreography. 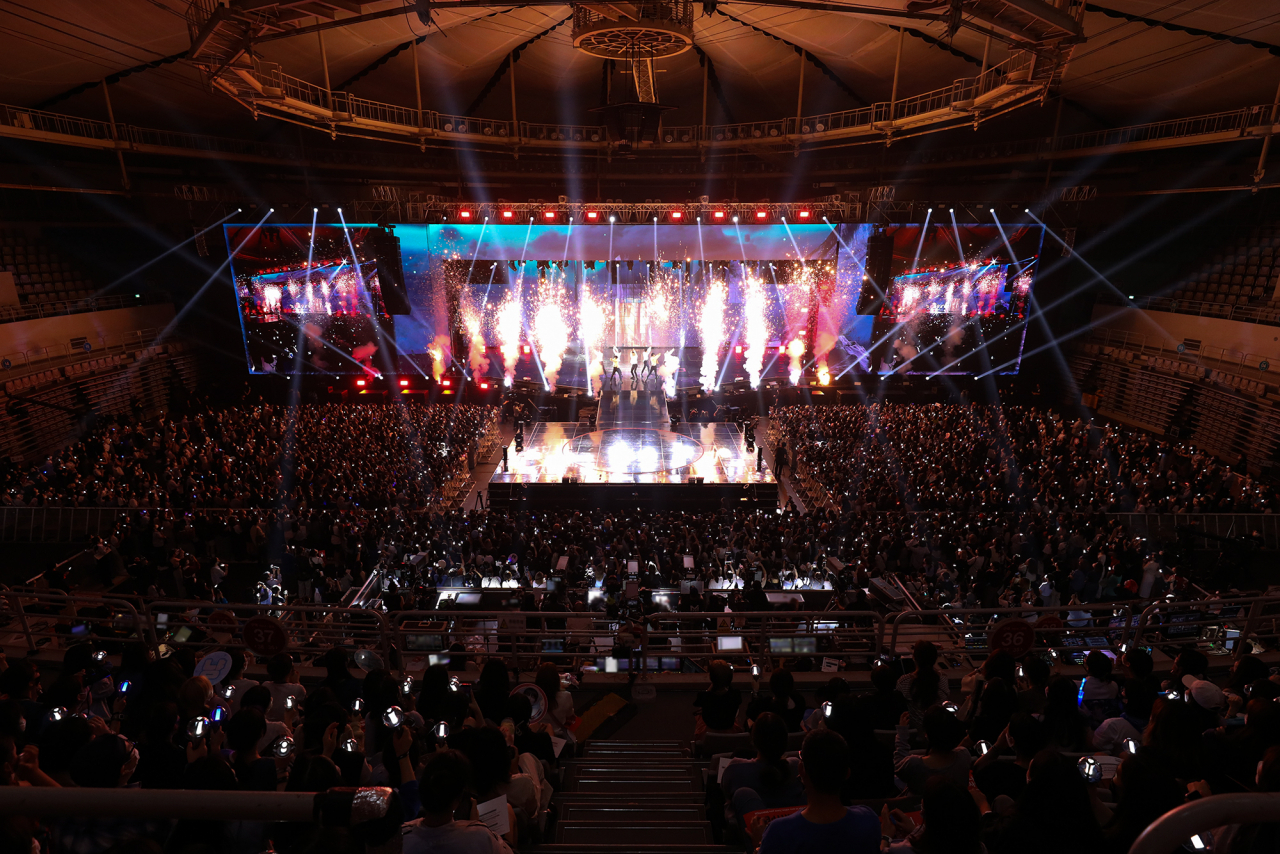 As the last song ended, tears welled up in Sunoo’s eyes and he thanked fans for an unforgettable memory to cherish. Hee-seung added to Sunoo’s statement, “I look forward to the things we’ll do in the future.”

The show came to an end with “Future Perfect (Pass the Mic),” the band’s latest song released in July, and encore performances of “ParadoXXX Invasion” and “Shout Out,” as the band came to the stage wearing T-shirts with “Manifesto” emblazoned across them.

Enhypen kicked off its first world tour on Saturday. The group next heads to the US and Japan for live sessions in nine cities.