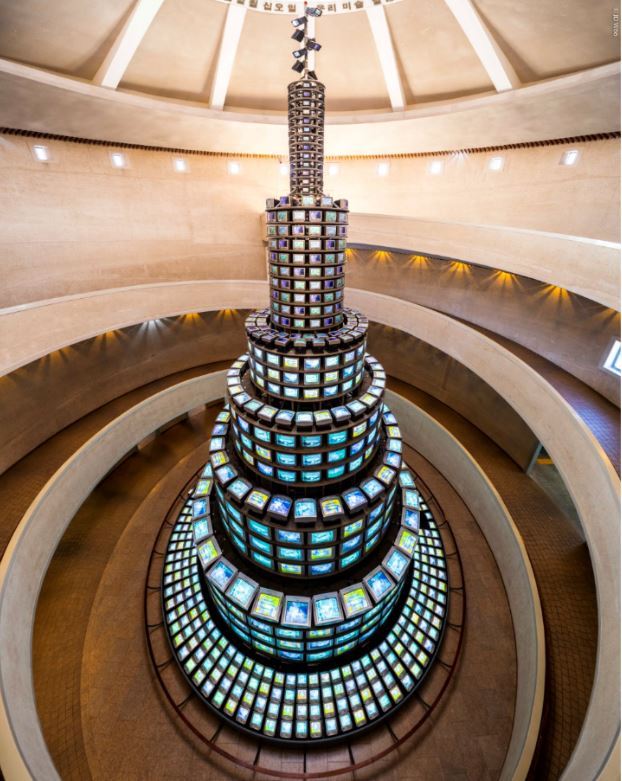 Paik Nam-june’s masterpiece “The More the Better” has completed its three-year restoration. The video tower is installed at the National Museum of Modern and Contemporary Art, Korea. (MMCA)

Korea-born video art pioneer Paik Nam-june’s masterpiece, “The More, The Better” -- an 18.6-meter-tall video tower -- was unveiled on Thursday after completing a three-year restoration. The reincarnation of the artist’s largest work is celebrated with the archive exhibition held by the National Museum of Modern and Contemporary Art, Korea.

The national museum celebrated the reoperation of “The More, The Better,” on Thursday at the museum’s Gwacheon venue after wrapping up a six-month test run this year. The restoration ran from 2019 to 2021, replacing or repairing the 1,003 CRT monitors that make the tower.

The upper part of the video tower replaced 266 6-or-10-inch CRT monitors with LED monitors maintaining the same outward form as the CRT monitors. The 737 outdated CRT monitors were either repaired or replaced with ones collected from recycling centers or secondhand markets across the country, according to the museum.

The museum has decided to run the video tower at a flexible schedule for now -- four days a week for two hours each day, and conducts regular inspections of the installation. Created in 1988, the artwork was completely shut down in 2018 due to technical problems, with frequent repairs having been made since 2003. The museum announced a three-year restoration plan in September 2019, intending to maintain the work’s prototype.

In celebration of the video tower’s reoperation, the museum has kicked off the archive exhibition “Merry Mix: The More, The Better” at MMCA Gwacheon, which will run through Feb. 16, 2023. The exhibition includes more than 200 archival pieces that show the process of the video tower's design to installation.

Paik’s legacy will be featured at the upcoming exhibition at the museum titled “Paik Nam June Effect,” which will open on Nov. 9. The exhibition will explore Paik’s trailblazing efforts in avant-garde video art and its influence on contemporary Korean art during the 1990s.