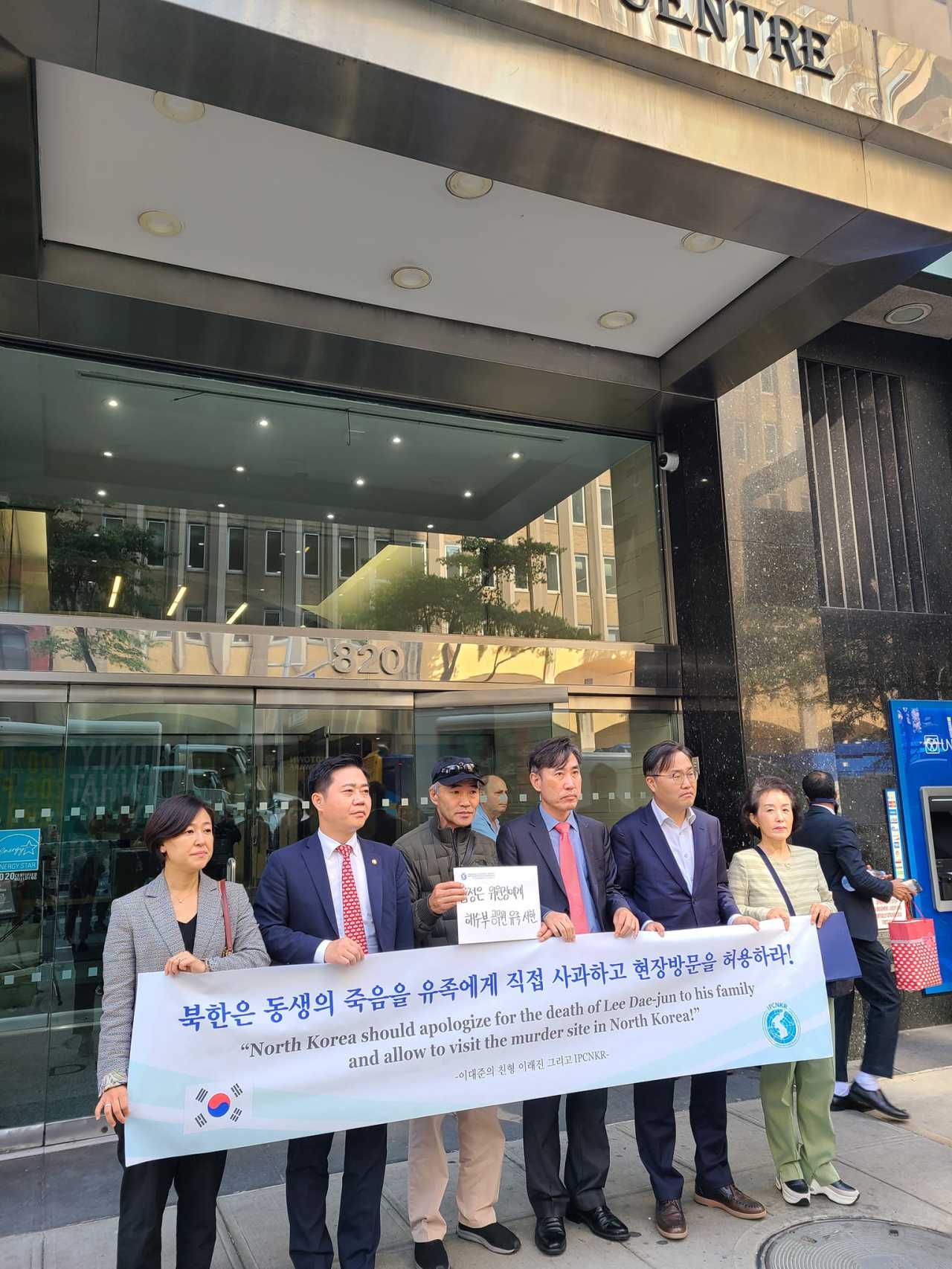 Lee Rae-jin (third from right), the older brother of South Korean fisheries official who was killed at sea by North Korean soldiers in September 2020, has recited a letter he wrote to North Korean leader Kim Jong-un outside the office of Permanent Mission of North Korea to the United Nations in New York on Friday. (courtesy of Rep. Ha Tae-kyung)
The older brother of Lee Dae-jun, South Korea’s Ministry of Oceans and Fisheries official who was killed by North Korean soldiers at sea in 2020, asked North Korean leader Kim Jong-un for a chance to visit the site of the tragedy.

In an open letter to Kim, which was made public on Friday, Lee urged to be granted “a chance to pay a visit” and “a moment to pray for him to rest in peace.”

He said that on the second anniversary of his death, on Sept. 22, his family planned to hold a funeral. The family has been waiting in the hopes of retrieve his body, which was never found.

Lee called for Kim to join the South Korean authorities and the United Nations in justice efforts and help his family get to the truth.

He said that as the eldest in the family, it was his responsibility to find out what had happened to his brother.

“I hope we are able to work together so that no other family is put through a pain like this again,” he said.

The letter was recited outside the office of the Permanent Mission of North Korea to the United Nations in New York on Friday afternoon.

This is not the first time Lee had tried to deliver a public message to the North Korean leader. In July last year, he sought to send via North Korean consulate and embassy a letter asking whether the remains of his brother could be recovered.

While Kim had said he “express(es) immense regret” in a message shared with Cheong Wa Dae shortly after the killing two years ago, Lee’s family has said that they did not consider it to be an apology.

“They blamed South Korea for what happened to my husband, which is the opposite of an apology,” said Kwon Young-mi, in an interview with The Korea Herald in June.

Lee is on a six-day trip to the US with four South Korean member lawmakers of the International Parliamentarians’ Coalition for North Korean Refugees and Human Rights.


Following is the full text of Lee’s letter to the North Korean leader, translated by The Korea Herald:
My name is Lee Rae-jin. I am the brother of South Korea’s Ministry of Oceans and Fisheries official Lee Dae-jun, who went missing on September 21, 2020, in the waters south of the Soyeonpyeong island. He was found and captured at around 3:30 p.m. the next day on September 22 near the Northern Limit Line. He was shot dead seven hours later at 9:47 p.m. and then set on fire.

I write this letter with grief and desperation for not knowing still the truth about how my brother died, and why. I have to find out what happened to him.

President Kim, while there have been some peaceful exchanges since our country was divided, several tragedies have also taken place.

In the tragic death of my brother, no one has been held accountable. Instead it was my brother who was unfairly blamed. Investigations by prosecutors are still underway, but it doesn’t change the fact that my brother won’t be coming home to his family.

Our mother passed away before I could break it to her that one of her sons had died. She must have been devastated to meet him in heaven.

For the last two years, I have been doing everything I can, meeting anyone I can, going everywhere I can to find out why this had happened to us. Nothing has been the same since.

As a fellow Korean I plead for your help and cooperation in the fact-finding investigation. I also plead for a chance to visit the site where my brother lost his life, and pay tribute as family. I earnestly ask for a chance to be at the site and have a moment to pray for him to rest in peace.

In the immediate aftermath South Korean authorities had announced that my brother had attempted to defect to the North. But now, under the new administration, authorities are saying that there is no evidence of attempts of defection. As the eldest, I feel it is my duty in the family to determine the truth so that my brother may rest in peace.

On September 22 this year, my family is going to hold a funeral without his body.

When my brother died, he left behind an 8-year-old daughter and an 18-year-old son. He was just 47 years old. I still have dreams about my brother and wake up thinking he doesn’t deserves this.

My niece, who is now 10, recently learned of her father’s death. It breaks my heart thinking she has to go through something like this so young and what this will mean for her as she grows older.

Lee Rae-jin, the older brother of the official of South Korea’s Ministry of Oceans and Fisheries Lee Dae-jun
By Kim Arin (arin@heraldcorp.com)