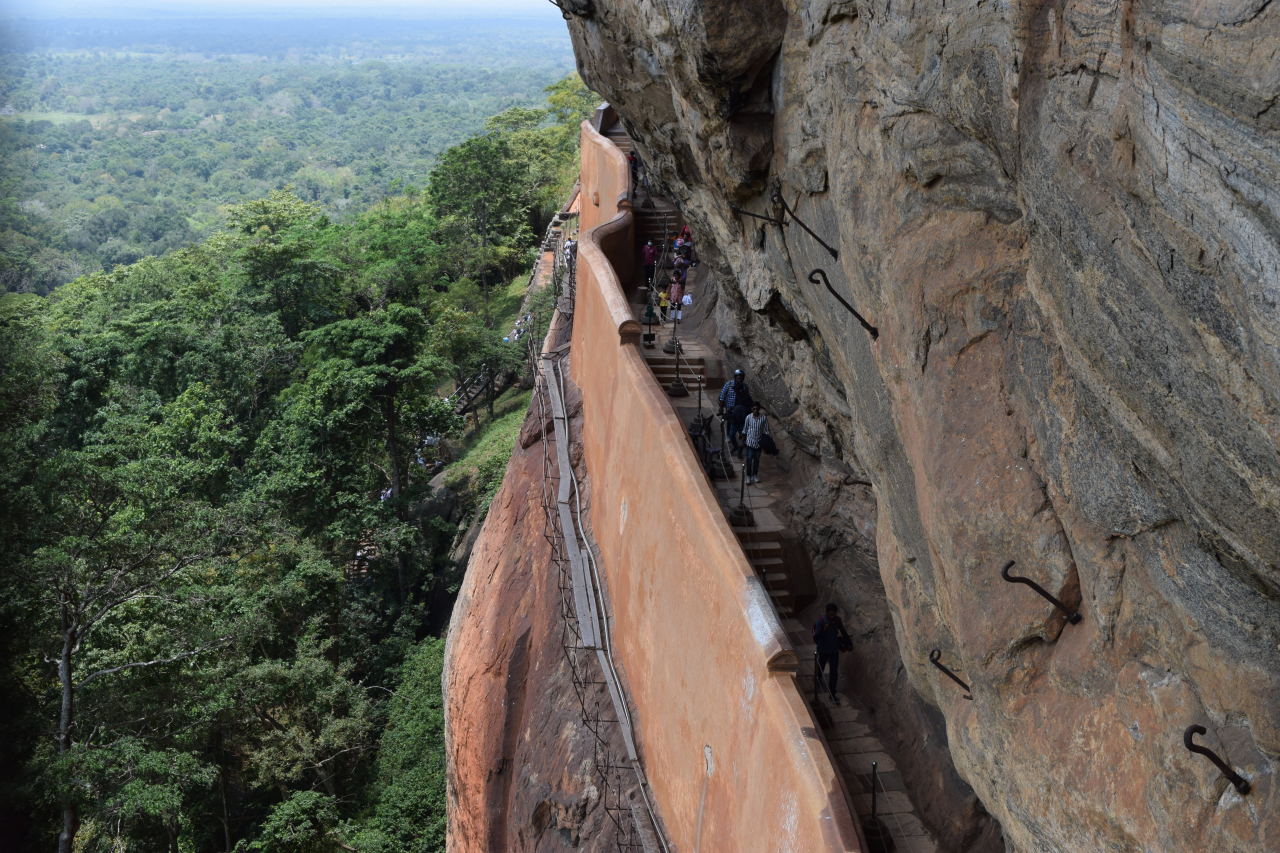 A spiral stairway leads to the top of the Sigiriya fortress, some 349 meters above ground, in Sri Lanka. (Kim Hae-yeon/ The Korea Herald)

COLOMBO, Sri Lanka -- Experiencing a foreign country can turn out to be one that is quite different from one’s expectations. But that is the beauty of travel. As Lewis Carroll, the author of "Alice's Adventures in Wonderland," said, "In the end, we only regret the chances we didn't take."

Those who wish to leave the familiar to explore the unfamiliar away from the urban crowd, Sri Lanka merits consideration.

Sri Lanka, which means “resplendent island,” is also referred to as the “Pearl of the Indian Ocean.”

Better known as "Ceylon" until 1972, the island embraces both the tranquil and vibrant nature with abundant tropical forests, mountainous regions and glittering seashores under the bright sunlight.

Picturesque meadows, rich spice-laden food, and coexistence with wild animals and nature, for most, can only be imagined.

Inspired by foreign tourists' comments on their trips, the Sri Lanka Tourism Promotion Bureau's tagline, “So Sri Lanka,” captures the authenticity and richness that can be felt when one sets foot in the country.

Sri Lanka is a multi ethnic state with a population of some 22 million: Sinhalese make up the majority of the population followed by Tamils.

With its literacy rate standing at more than 92 percent, the highest among developing nations, the free and open education has been the country's pride. 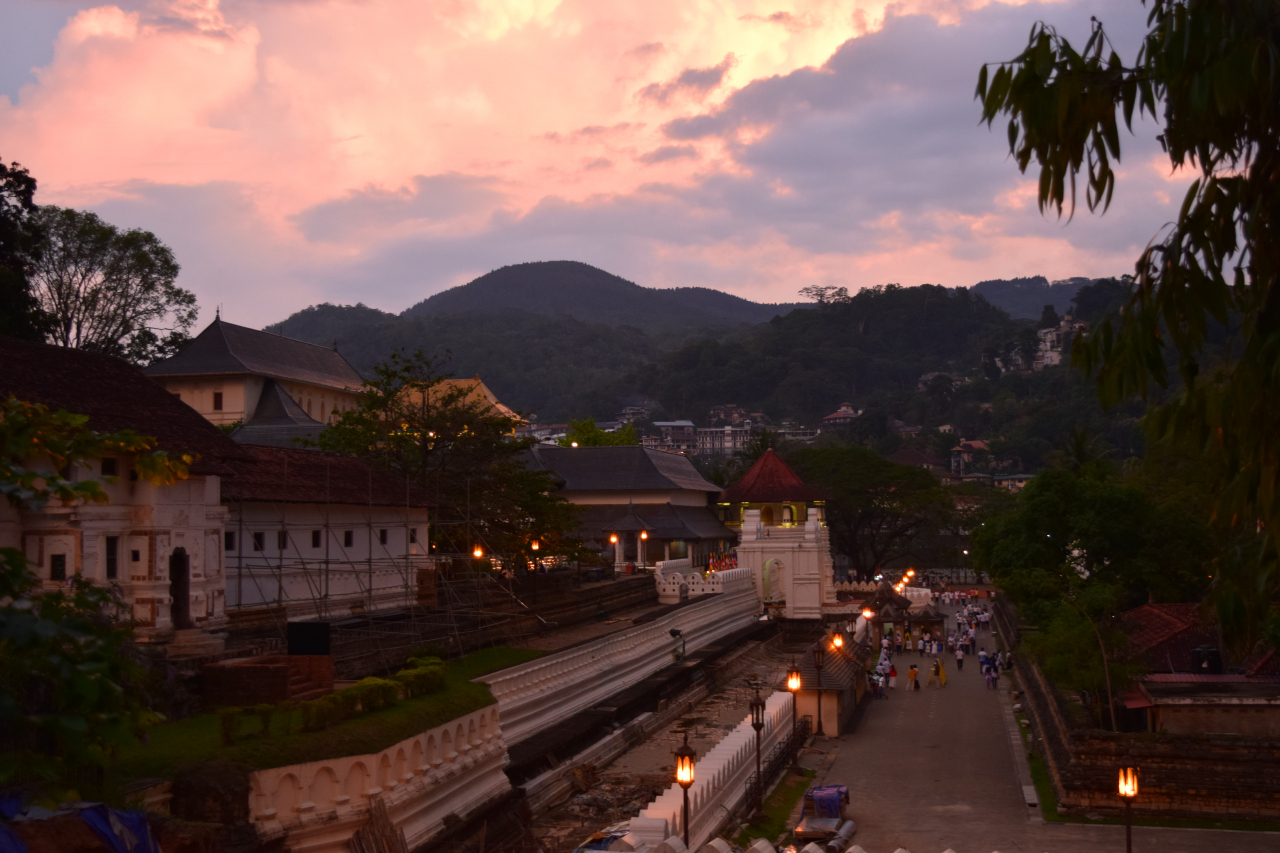 A view of the Temple of the Tooth in Kandy, Sri Lanka, at sunset on March 27 (Kim Hae-yeon/ The Korea Herald)

“Ayubowan!” The salutation in Sinhalese, wishing a long life, is the most frequently heard greeting while in the country.

After successive periods of colonial rule -- by the Portuguese, the Dutch and the British -- that lasted nearly 500 years, the country gained independence in 1948, but it later plunged into 26 years of civil war that ended in 2009. Hopes to overcome such historical tragedies seem to be reflected in the peoples’ daily greetings.

The Korea Herald visited some favorite sightseeing and tourism spots selected by travelers and the people of Sri Lanka alike, in March at the invitation of the SLTPB.

The country is on a road to economic recovery after a financial collapse and the Korean government has issued a special travel advisory for Sri Lanka on May 20, which is still in effect. This means that Korean citizens are urged to delay all trips to Sri Lanka unless necessary, or take caution if they are already the country.

It is never too early to plan your travels and here are some highlights of the six-day trip to Sri Lanka that may serve as a guide in mapping out your own travel for when the travel advisory is lifted. 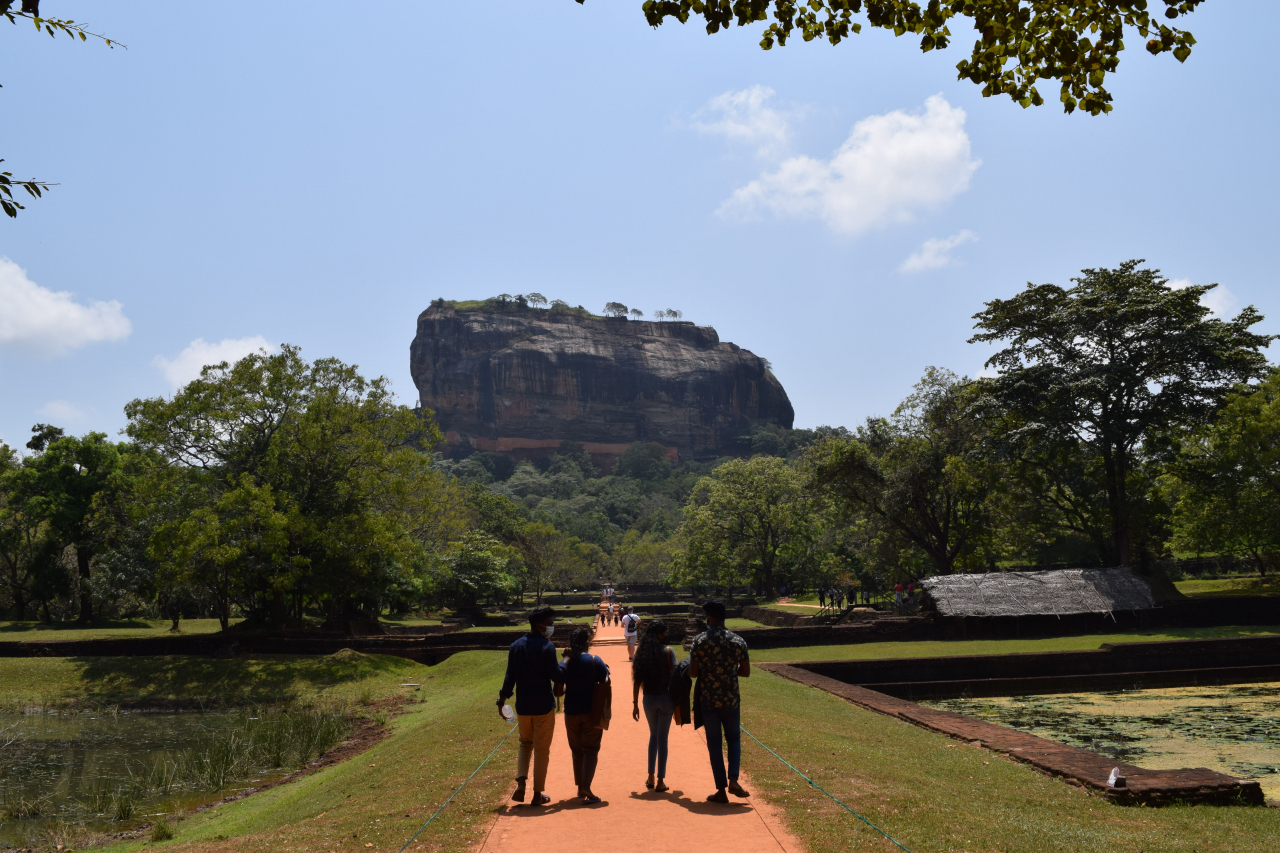 Located near the town of Dambulla in Central Province, the Sigiriya ancient rock fortress is one of Sri Lanka‘s eight UNESCO World Heritage sites.

Nature created the massive 200-meter-high rock, with its surface at the top shaped flat.

The climb takes about an hour on steep stairs.

Half way the top, a symbolic giant rock that resembles a pair of lion’s paws can be seen which acts as the main entrance to the mountain peak.

The upper part of the structure has collapsed over the ages, leaving the rock's mysterious shape a great photo spot for travelers.

Climbers who make it to the top are rewarded with a stunning view of nature unfolds with mountains lined up in rows that meet the sky.

The ruins of the 5th century King Kashyapa’s palace features the king’s terraced gardens and organic caves with frescoes. The architecture blends harmoniously with the natural environment. 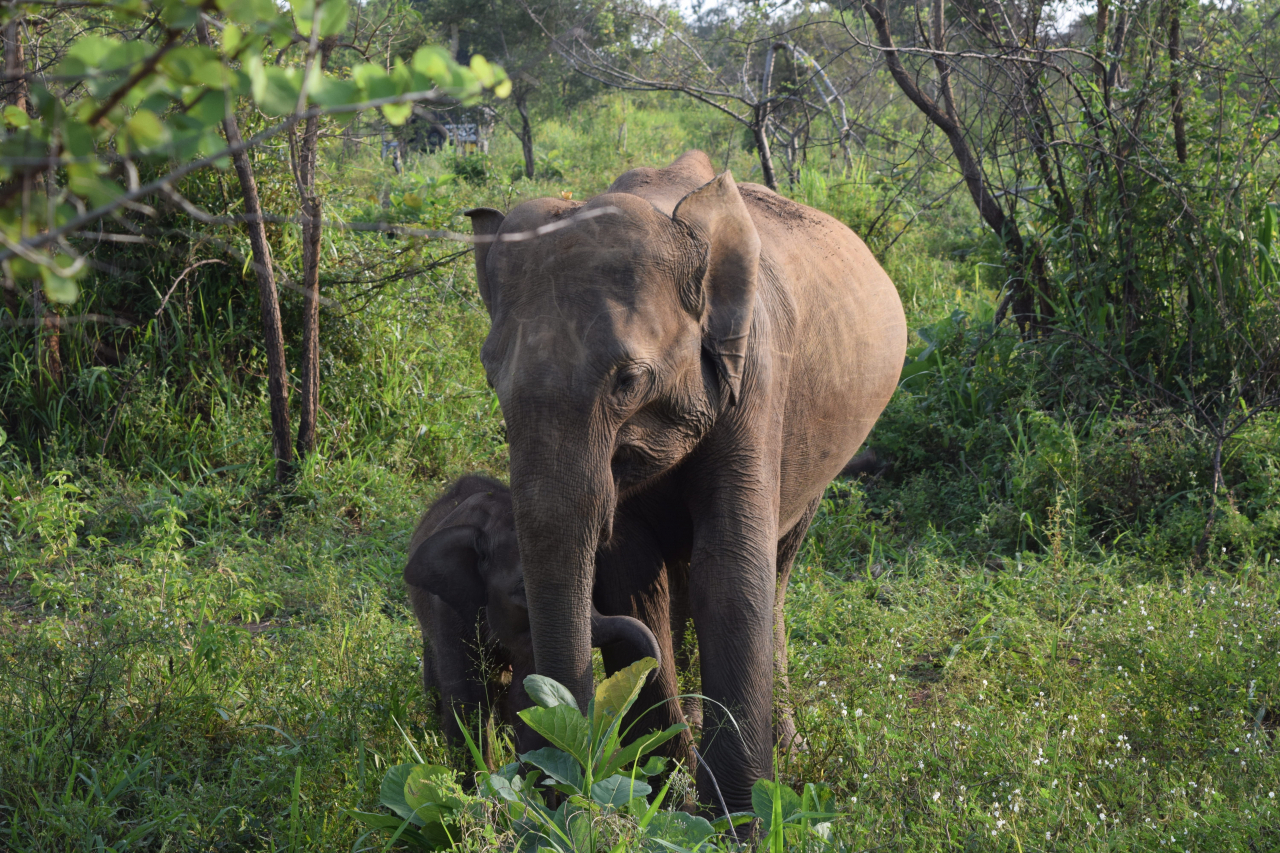 Wild elephants are observed at the Minneriya National Park, on March 26. (Kim Hae-yeon/ The Korea Herald)

A 30-minute drive from the Sigiriya is the Minneriya National Park, one of the 22 national parks in the country.

Situated around a reservoir, the park is famous for safari tours during which wild elephants, deer and various bird species can be seen.

Although open throughout the day, the best time to visit is during sunset after 4 p.m., since gentle breeze and setting sun make the three-hour jeep ride much easier. 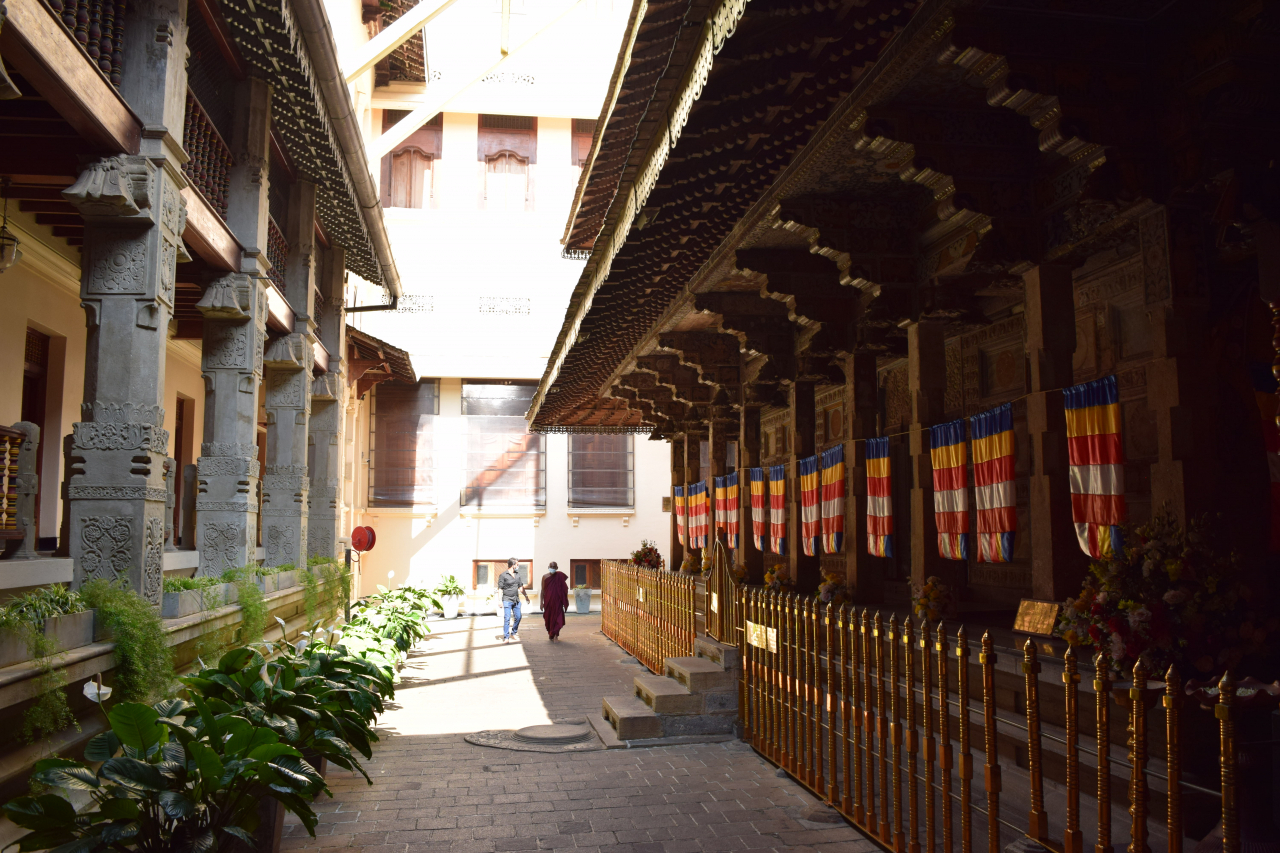 Kandy is Sri Lanka’s second largest city after Colombo. The favorite city among both tourists and Sri Lankans, the city was designated a UNESCO World Heritage Site in 1988. The city, located some 465 meters above sea level, features the scenic Kandy Lake situated at its heart.

A must-visit site when in Kandy is the Temple of the Tooth, which houses the tooth of Lord Buddha.

An annual national event is held at the temple in July or August at the temple, called Kandy Esala Perahera, or The Festival of the Tooth.

According to a legend, after Buddha was cremated, his remains were distributed for worship, and out of all his remains, his four canine teeth were considered the holiest of all. The temple is the resting place of one of the four.

When ascending the stairs to the two-story shrine to view the tooth, be mindful of the steps since huge crowds are expected. The casket that protects the tooth is removed from the shrine only during the festival. 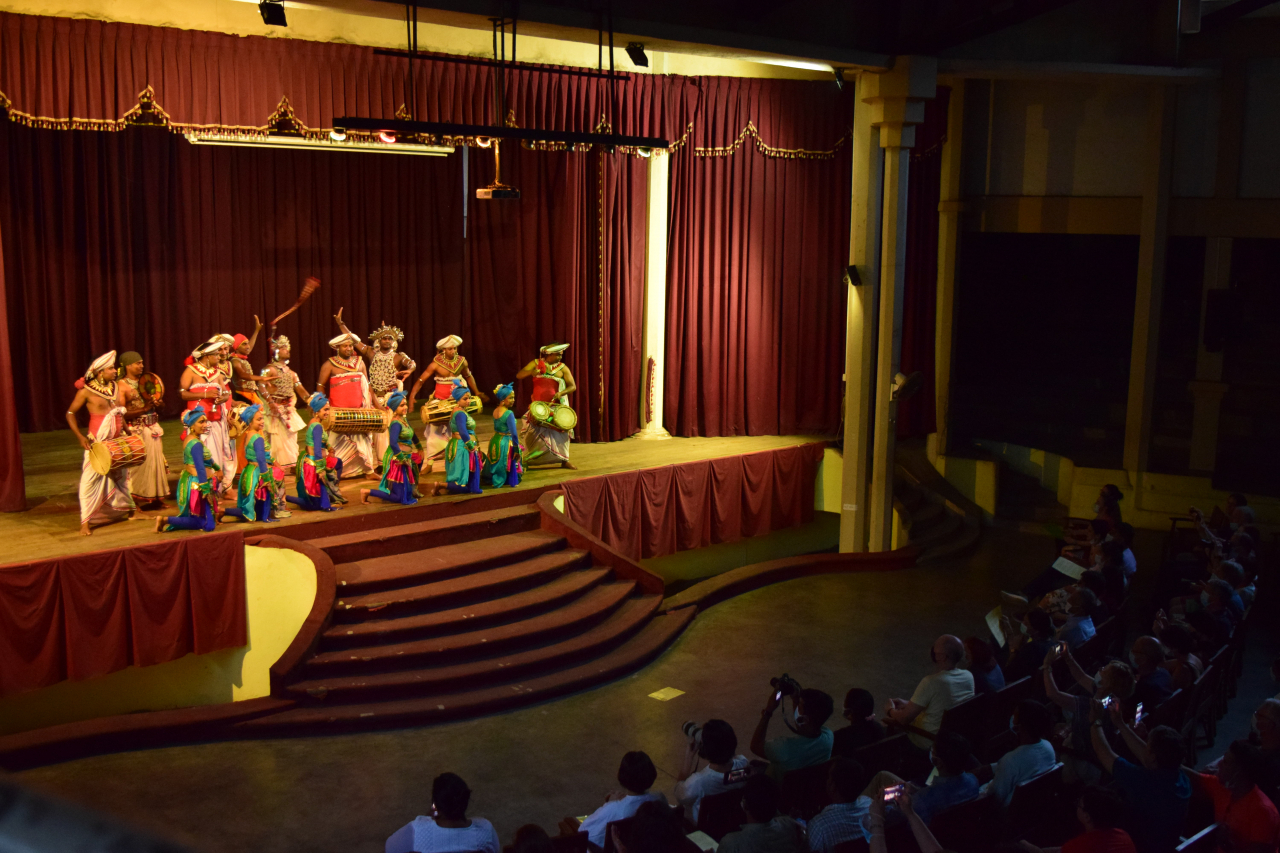 Traditional Kandyan Dance is performed at a theater near Kandy Lake, on March 27. (Kim Hae-yeon/ The Korea Herald)

After viewing the temple, a five-minute walk will have you at Kandy Lake. Towards the eastern end of the lake, you will notice a few signs that point to a performance theater, Kandyan Cultural Show.

The hourlong traditional Kandyan Dancer showcases traditional exorcism ceremonies and masked dramas that accompany various mimes, songs, dances and acrobatics. Guide pamphlets in some 12 languages are provided at the entrance. Towards the end of the show, the dancers invite audiences to the stage for a closer look at the fire acts, the highlight of the performance. 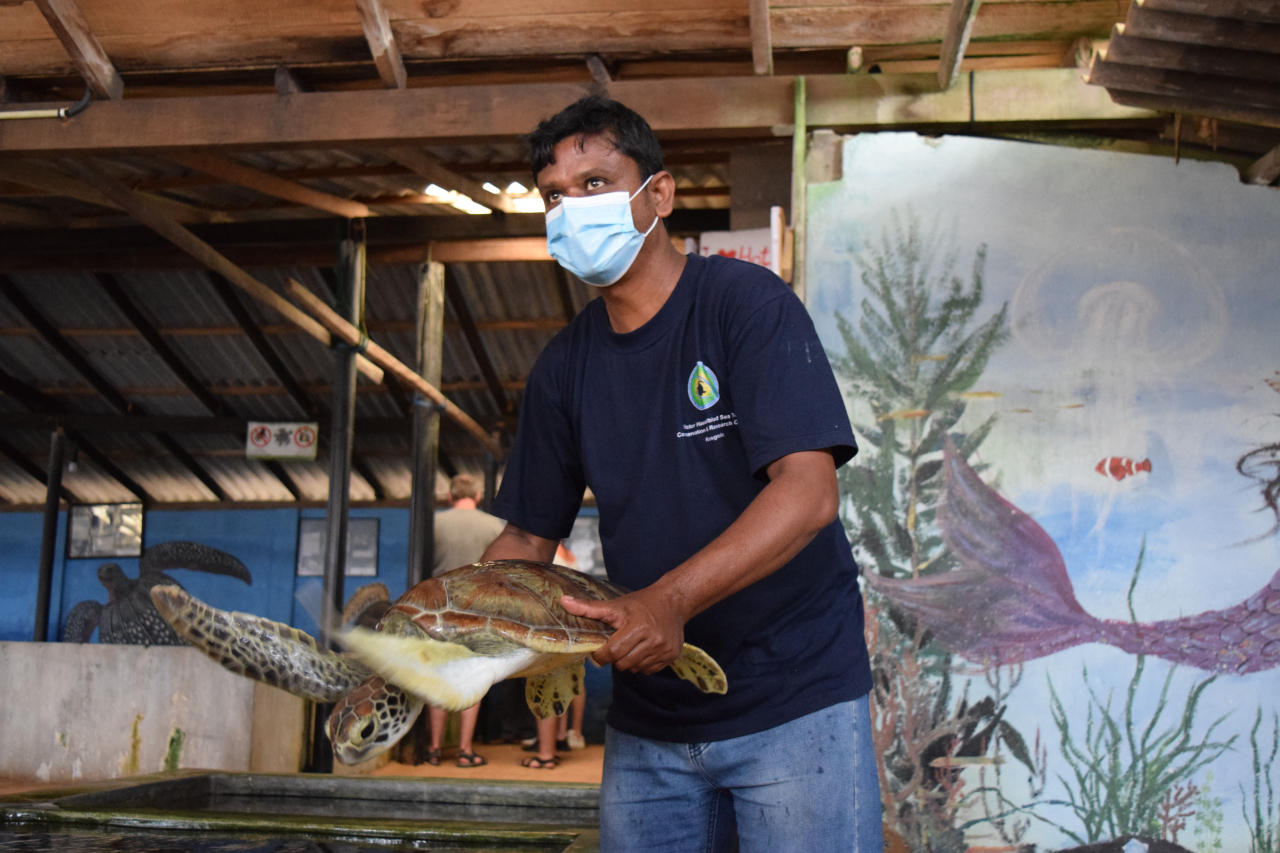 A researcher holds up an injured sea turtle to explain the recovery process to the visitors at Sea Turtle Research and Conservation Center, on March 28. (Kim Hae-yeon/ The Korea Herald)

Madu Ganga River, located near two popular coastal towns, is the second-largest wetland in Sri Lanka. It has rich biodiversity, with over 500 species of plants and animals. A haven for botanists and ecologists around the world, the Madu Ganga offers boat trips to to watch monkeys pick fruits in trees, water monitor lizards glide through the water and cormorants and egrets.

Some 64 islands in the river and lagoon are settled. If starting the trip after sundown, you will notice fishermen in canoes lighting lanterns to attract shellfish into their traps.

About a 20-minute ride from Madu Ganga stands the Victor Hasselblad Sea Turtle Research and Conservation Center, the first turtle hatchery on the island that opened in 1978.

The center has helped some 5 million turtle hatchlings make their way into the sea. The center rehabilitates injured turtles and initiates global campaigns to put an end to illegal fishing.

Accompanied by the center’s researcher, visitors can observe hundreds of turtles 1-3 days old along with thousands of unhatched eggs sheltered for over a month.

The center is located on the Kosgoda Beach, a good spot to take some time to relax after a day’s trip.