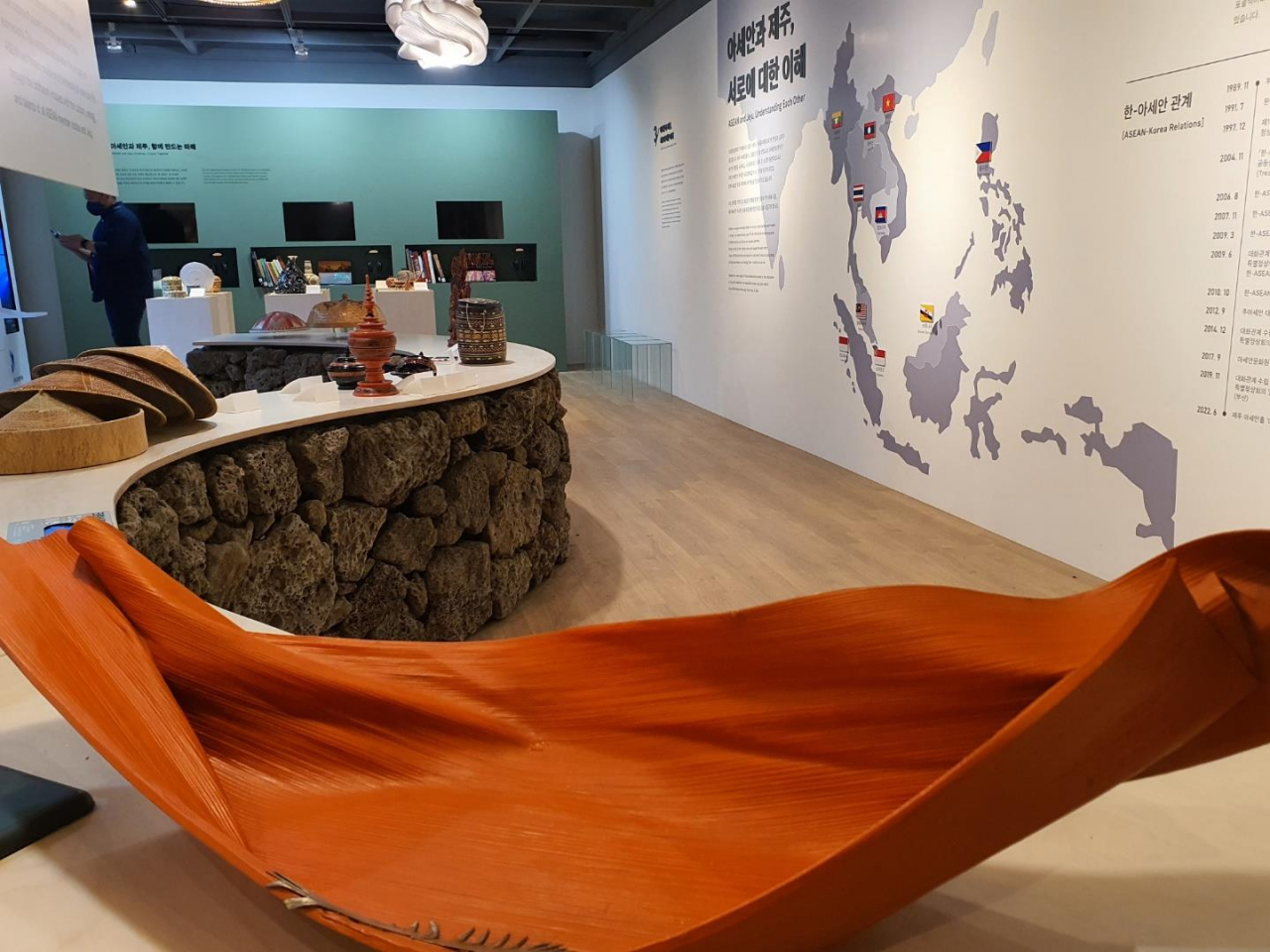 Handicrafts are on display at the opening exhibition of Jeju ASEAN Hall. (Yonhap)

A new space has opened on Jeju Island for discovering the Association of Southeast Asian Nations (ASEAN) countries and promoting exchanges between ASEAN and Jeju.

Jeju ASEAN Hall, the first joint project undertaken by the ASEAN-Korea Centre and Jeju Island with the aim of strengthening mutual understanding and people-to-people connections, opened at the International Peace Center Jeju, Thursday. 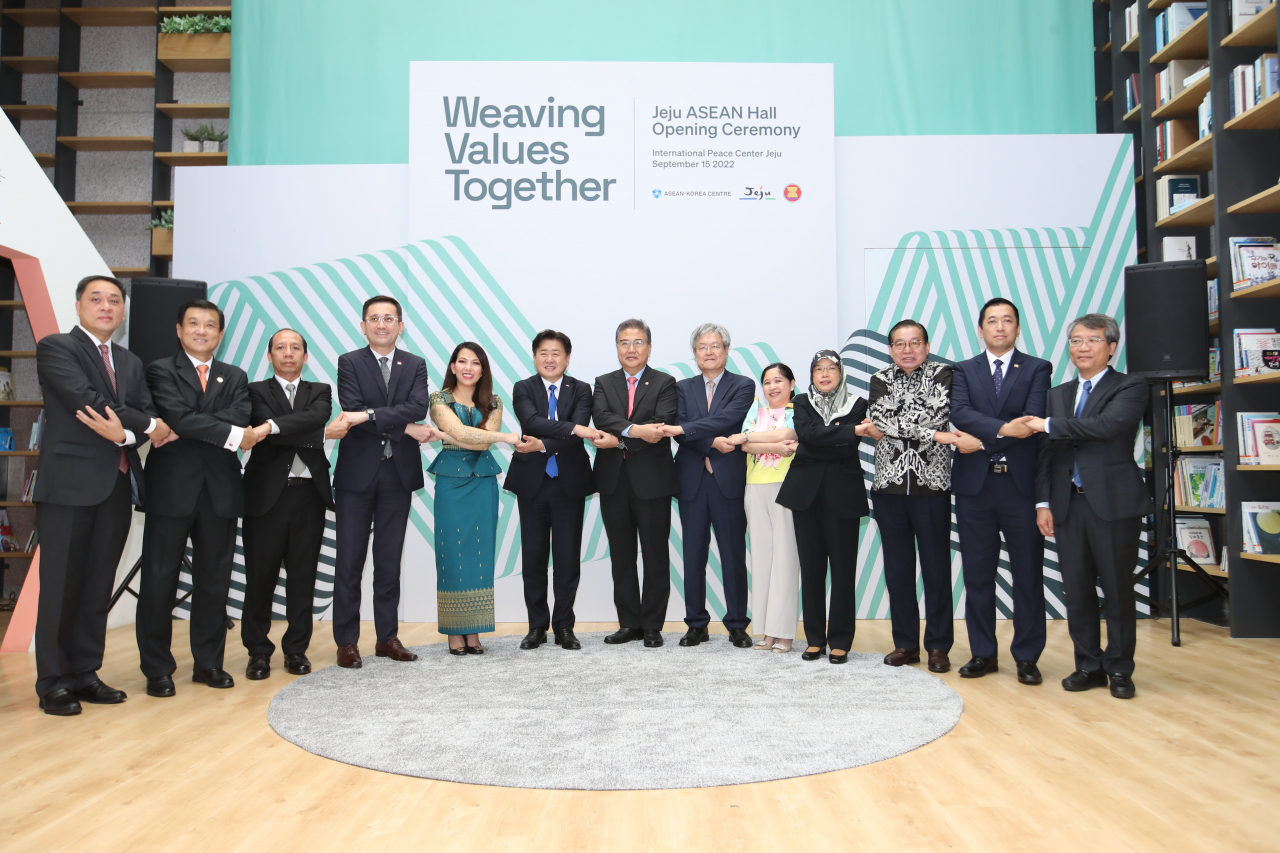 “I truly hope Jeju ASEAN Hall becomes a venue for site visits, especially among the future generation … allowing visitors to think together to further develop ASEAN-Korea solidarity,” said Kim in his opening remarks.

Minister Park highlighted the significance of the location noting the high proportion of multicultural families from ASEAN living in Jeju.

“I hope (the hall) plays a role in promoting the culture and history of ASEAN and Korea to both Jeju residents and tourists visiting the island.

Noting the significance of Jeju Island in Korea-ASEAN relations as the venue of the 2009 ASEAN-Korea Commemorative Summit, Gov. Oh said that the Jeju Special Self-Governing Province is working on adopting a new policy that would expand cooperation with ASEAN as well as Arab countries.

Cambodian Ambassador Chring Botum Rangsay, who also holds the Chair of the ASEAN Ambassadors Committee, marked the 33rd anniversary of the bilateral relations in her congratulatory messages.

“In the framework of ASEAN-ROK, we note with great satisfaction the positive development … and the significant progress through ROK’s initiatives, which are aligned with relevant ASEAN-led mechanism of increasing diplomatic ties and trade relations even in the wake of the pandemic.” said the ambassador.

In an interview with The Korea Herald, the envoy highlighted the sense of “togetherness” to focus on the common agenda for peace and cooperation, referring to the 25th ASEAN-ROK Foreign Ministers’ meeting held in Cambodia, Aug. 4.

Singaporean Ambassador Eric Teo added, “It's good to have this fixed location in Jeju to introduce ASEAN to Jeju residents and millions of visitors, both Koreans and foreigners. … ASEAN is a very substantial market with a population of 660 million and 60 to 65 percent is under the age of 35.” 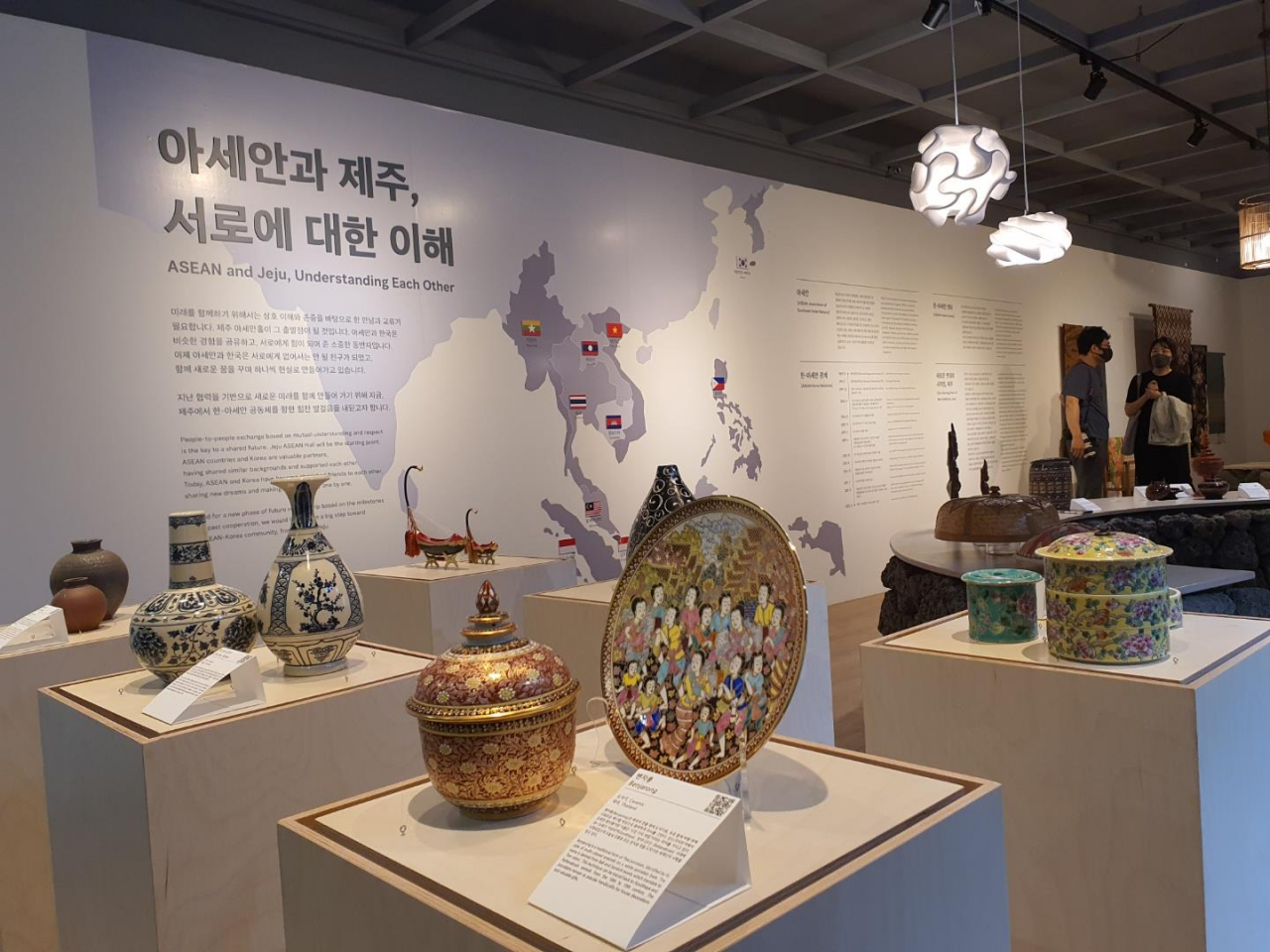 Handicrafts are on display at the opening exhibition of Jeju ASEAN Hall. (Yonhap)

Under the theme of “Weaving Values Together,” the opening exhibition is divided into four sections offering a glimpse into the society, culture and history of the ASEAN member states and Jeju Island.

In the “Bonding of ASEAN and Jeju” section, 22 types of modern and traditional handicrafts -- two from each ASEAN country and Jeju Island -- expressing the national identity and unique culture of the countries are on display. 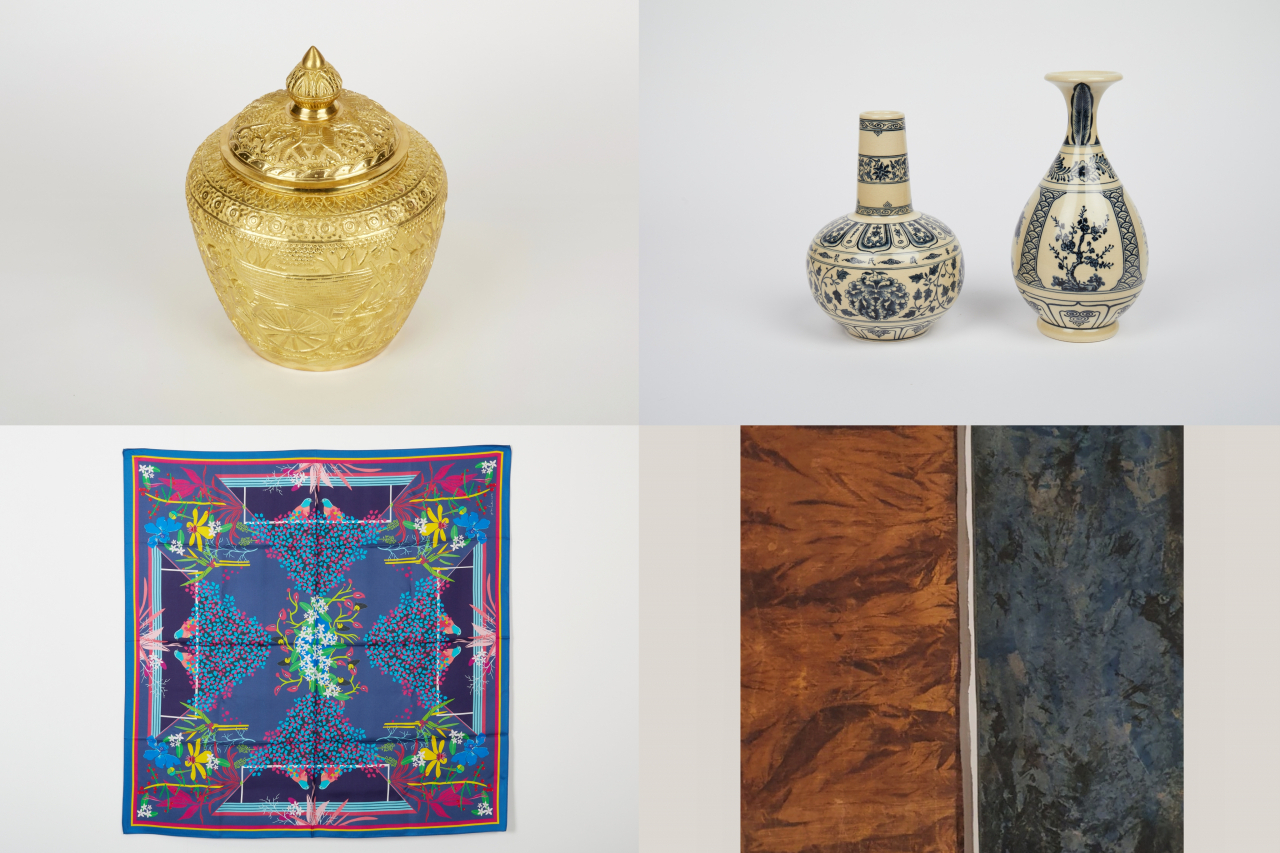 A copper jar donated by the Embassy of Cambodia describes the daily activities of the people during the Angkor period while a carved art piece from the Khmer Empire displays a delicate yet strong beauty.

Two pieces of ancient Chu Dau pottery, donated by the Vietnamese Culture Ministry, feature the refined aesthetics of ceramics from the Chu Dau Pottery Village, while a “Dazzling Singapore” silk scarf, featuring hand-sketched designs of native plants, is a special edition piece inspired by the unique architectural theme of the Singapore Pavilion at Expo 2020.

Jeju Island also donated a fabric dyed with a natural dyeing technique native to the island that uses the juice of unripe persimmons. 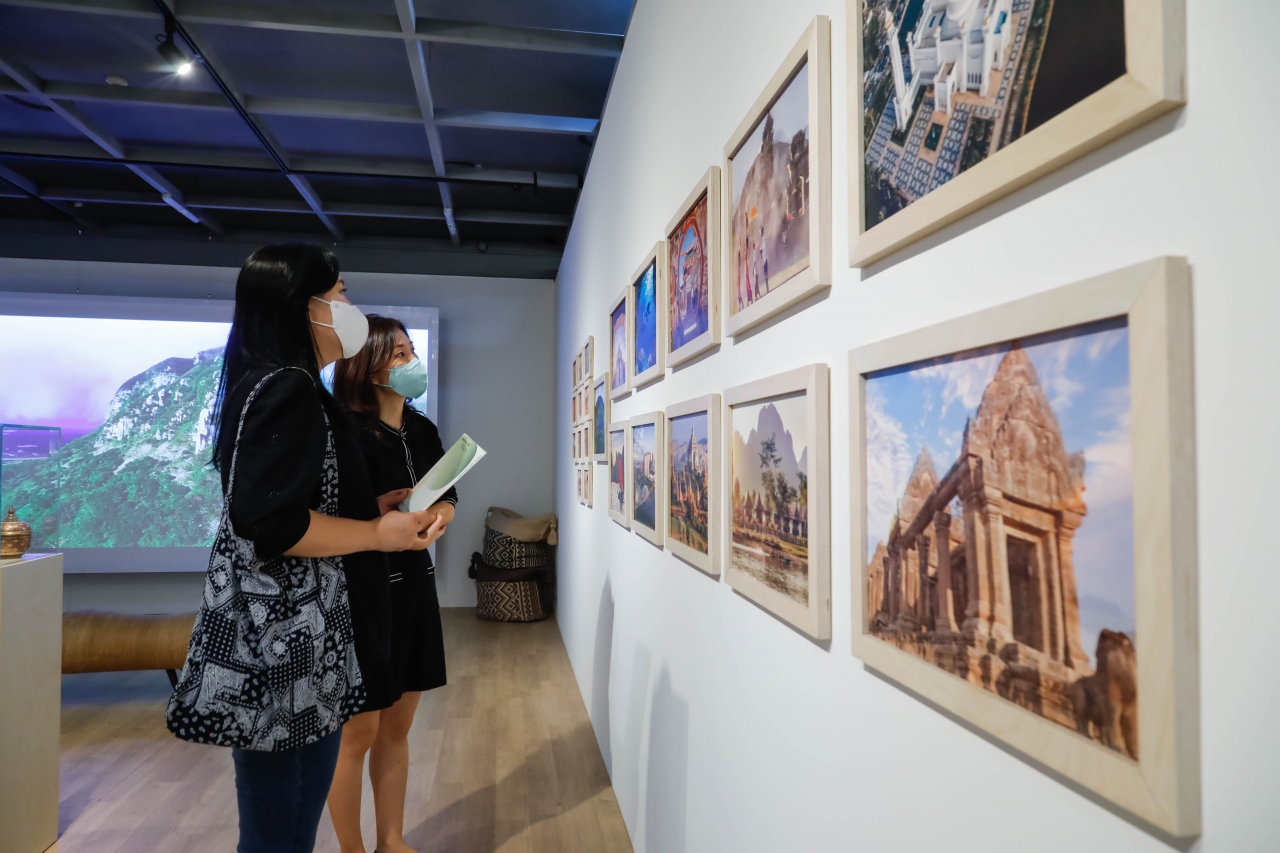 The “Beauty of Everyday Life” section displays photos and videos of artisans exploring the beauty and aesthetics of craftsmanship while the “ASEAN and Jeju, Understanding Each Other” section explains the developments and partnerships between the two parties. Detailed information on the cultures of the ASEAN member states and Jeju are available through diverse multimedia resources.

“The digital kiosks provide information on not only ASEAN member states but also ASEAN-Korea relations,” Kim, of the ASEAN-Korea Centre, said in explaining the exhibition.

The Jeju ASEAN Hall is jointly operated by the ASEAN-Korea Centre, Jeju Special Self-Governing Province and the International Peace Foundation in Jeju based on a trilateral memorandum of understanding signed in November 2021.

The ASEAN-Korea Centre is an international organization founded in 2009 to promote economic, social and cultural cooperation among the 10 ASEAN member states and South Korea.