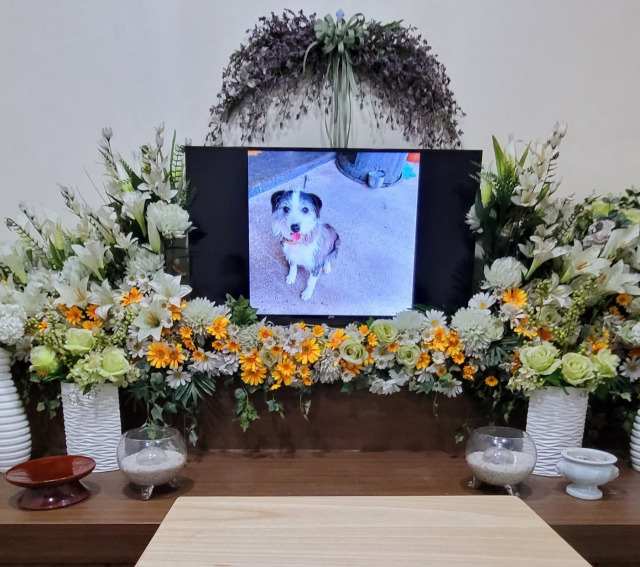 This photograph shows a funeral for the dog Boksun, held by the Beagle Rescue Network. (Yonhap)

Boksun was once hailed as a hero for helping save her owner while he was experiencing a stroke three years ago.

Last month, she was found bleeding heavily at her home in Jeongeup, North Jeolla Province, having been brutally injured by an abuser. Her owner took her to a vet, but after learning about the hefty medical costs, gave up on saving her. She was later found dead inside a refrigerator of a dog meat restaurant.

The tragic story of Boksun, made public by a local animal rights group, raised some hard questions about how South Korea treats animals. Between animal cruelty and the dog meat trade to a money-spinning pet industry and an ever-growing number of households living with pets, where does the country really stand?

Last week, the Beagle Rescue Network, which reported Boksun’s case to the public, asked police to investigate the initial attacker as well as the dog’s owner for animal abuse. It said that the unidentified owner, too, should be held responsible for the dog’s death, claiming that the person handed over Boksun, who was still alive, to a dog meat trader. The dog owner refuted the claim, saying Boksun was already dead by that time.

The debate over the owner’s liability aside, animal abusers in South Korea often get away with fines, if ever convicted, although the Animal Protection Act prescribes a maximum three-year imprisonment for animal cruelty.

According to data obtained by the office of Rep. Song Ki-hun of the opposition Democratic Party of Korea, only 2.9 percent of a total 4,221 persons accused of abusing animals between 2017 and March this year were indicted for a full trial.

About 47 percent did not face any criminal charges at all, while 32 percent of the accused were subjected to a summary judgement – a procedure in which the court, without a full trial, rules on a case of simple or minor subject matter typically resulting in a fine or penalty.

Of the 346 who have received any form of punishment, nearly 60 percent received fines. Only 5.5 percent, or 19 persons, were given a jail sentence.

Under the current law, a person who kills an animal via abuse can be punished by up three years in prison or 30 million won ($21,581) in fines.

“There has been a significant improvement in public awareness of animal rights and protection but the court hasn’t caught up with the change,” Rep. Song said.

In July, police nabbed two men suspected of operating an open chat room sharing photos and videos of violence against animals, wrapping up a four-month investigation. The case was dubbed “animal Nth Room case,” in reference to the infamous digital sexual exploitation crime that took place on open mobile and online chat rooms.

“An increase in animal cruelty is becoming a severe social issue. Such acts (against animals) must be stopped, particularly since there is a real risk that such violent acts could target not only animals, but also humans,” Rep. Lee said.

Why do people abuse animals?

With an increase of harrowing cases of animal cruelty popping up in the news, there have been efforts to understand the psychology of animal abusers. Some experts in criminal psychology point to similarities between animal abusers and violent criminals, as both groups of people lack empathy toward their victims.

Song Byung-ho, the head of the Korean Association of Criminal Psychology, pointed out that varying levels of antisocial personality disorder can be observed in animal abusers, such as a lack of empathy toward other beings and being unable to restrain one’s urge for violence.

“If (animal abusers) are unable to satiate the stimulus they desire through abusing animals, there is a substantial possibility that they might target humans, particularly those who are relatively weak like women or children,” Song said.

Some of Korea’s worst criminals were found to have abused animals in their past. Infamous serial killer Yoo Young-chul, sentenced to death for killing 20 people from 2003 to 2004, stabbed or struck dogs to death prior to going on his killing spree. 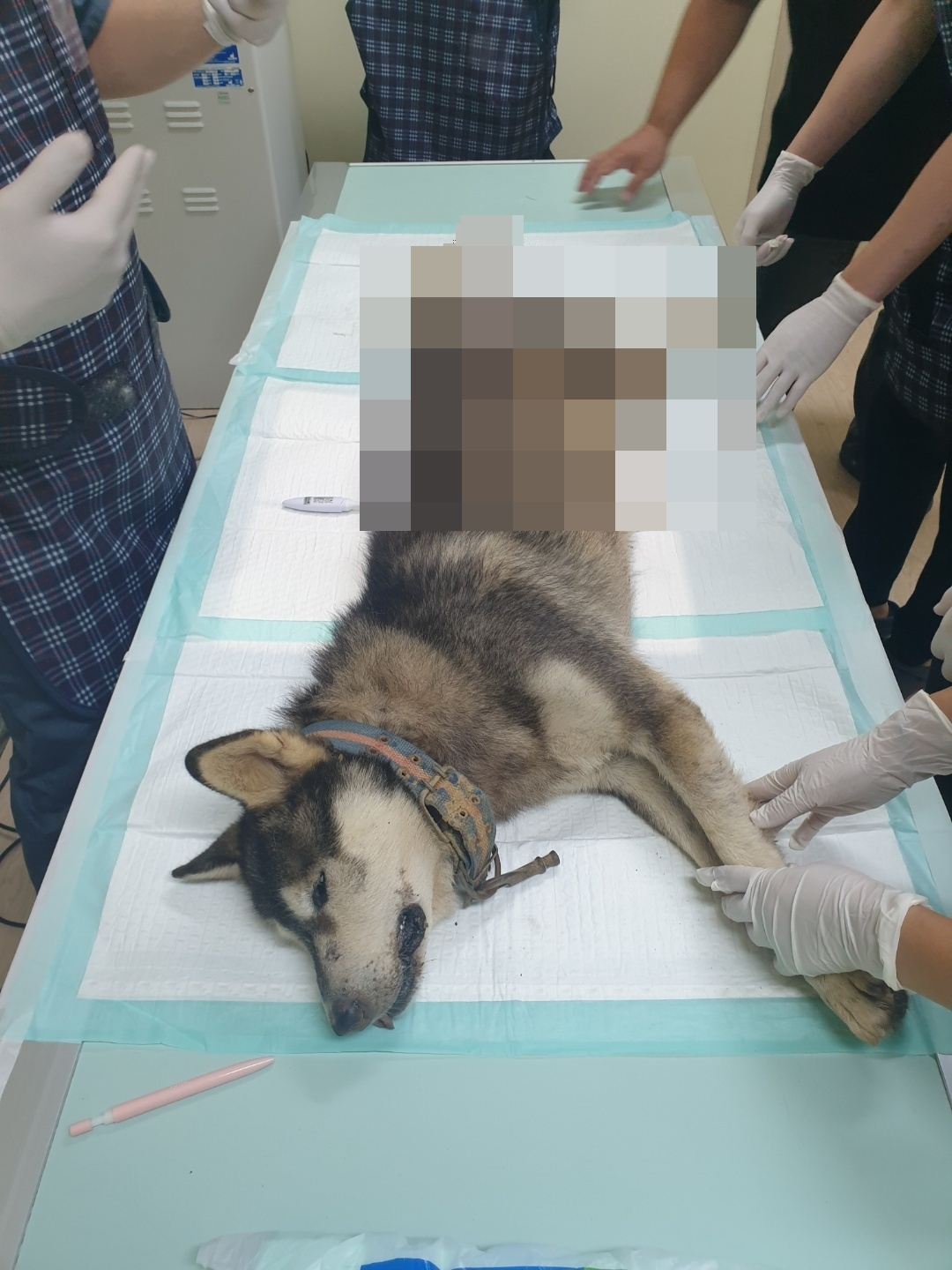 This Aug.26 photo provided by the Jeju City shows an operation on a dog who was found with an arrow piercing out of his body. (Yonhap)

Serial killer Kang Ho-sun, who is on death row for taking the lives of 10 people, reportedly killed dogs that he raised between 2003 and 2006, mostly via cruel means. “Killing dogs made me less sensitive toward killing, and I couldn’t resist the urge to kill,” he was quoted as saying during his trial.

There have been studies across the world about the connection between violence against animals and against humans. A 2008 report from the Michigan State University College of Law pointed out a correlation between animal abuse, family violence, and other forms of community violence.

“Cruelty to animals can be a warning sign of future violent behavior. A child’s aggressive, abusive behavior towards animals may predict later violence towards people,” the paper said, adding that a child abusing an animal can be considered a red flag in identifying other violent behaviors. Researchers noted how the Federal Bureau of Investigation considers past animal abuse when profiling serial killers.

John Douglas, a retired criminal profiler for the FBI, was quoted as saying that sadistic behavior toward animals is among the major similarities shared by many serial killers, and that the biggest indicator of future crimes was animal cruelty and torturing. He wrote in his book “Mindhunter: Inside the FBI’s Elite Serial Crime Unit” that many serial killers’ earliest acts of violence are often torture and/or killing of animals.

‘Animals are not property’

With rising awareness on animal rights in Korea, there has been a series of efforts to cover the legal and systematic blind spots concerning cruelty against animals. While there are various issues on multiple fronts being discussed, animal rights groups have zeroed in on the nation’s Civil Act, which recognizes animals merely as the property of the owner, as the most fundamental problem.

For instance, because animals are just objects, a person who kills someone else’s pet is mandated to compensate for the purchasing price of said animal, just like a neighbor compensating for a broken window.

To address this problem, there is an ongoing legislative procedure to give animals a legal status, by adding the clause “animals are not property” in the Civil Act. If enacted, this will mark a symbolic breakthrough in the promotion of animal rights, although legal experts stress that revisions of other related clauses need to take place for it to be effective.

For example, being compensated for the psychological wounds suffered after losing a pet due to another person’s abuse is expected to be much easier, compared to when pets are legally defined as property.

A flurry of talks are currently under way on related issues.

The Justice Ministry said it was mulling a revision of the clause that will exclude animals from forcible seizures of properties. Rep. Shin Jung-hoon of the main opposition Democratic Party proposed a revision bill on the same matter in July. Other possible revisions include expanding the legal definition of pets, which now only refers to dogs, cats, rabbits, ferrets, guinea pigs and hamsters.

“Civic Act is a basic law that can be the foundation to revise other laws. For example, efforts to exclude pets from items that can be forcibly seizure of properties by the court had been thwarted in the past, because it conflicted with the current Civic Act (that recognizes animals as property),” lawyer Jo Hae-in of the Korean Animal Welfare Association was quoted as saying. “Procuring animal rights doesn’t end with revising the Civic Act, but begins with it.” 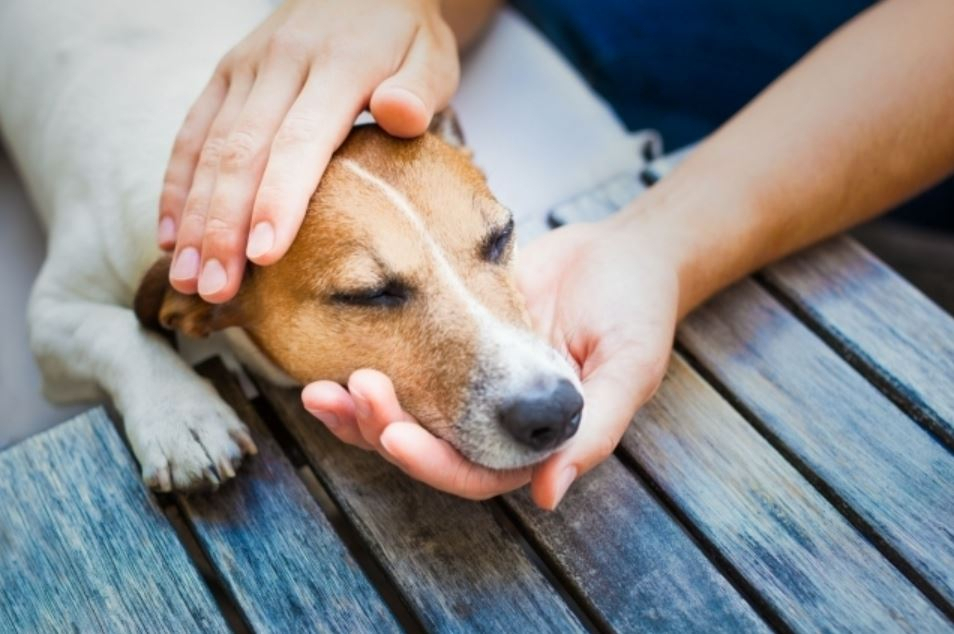 This photo is not directly related to the article (Yonhap)

A revision of Animal Protection Act will take effect on April 27, 2023, which will introduce heavier punishments to animal cruelty offenders.

Neglecting a pet which results in its death would be punishable by the same penalty as killing an animal via abuse -- a maximum three-year imprisonment.

The new law will also ban convicted animal abusers from having pets and mandate the regional governments to confiscate and care for pets whose ownership have been forfeited by the owners.