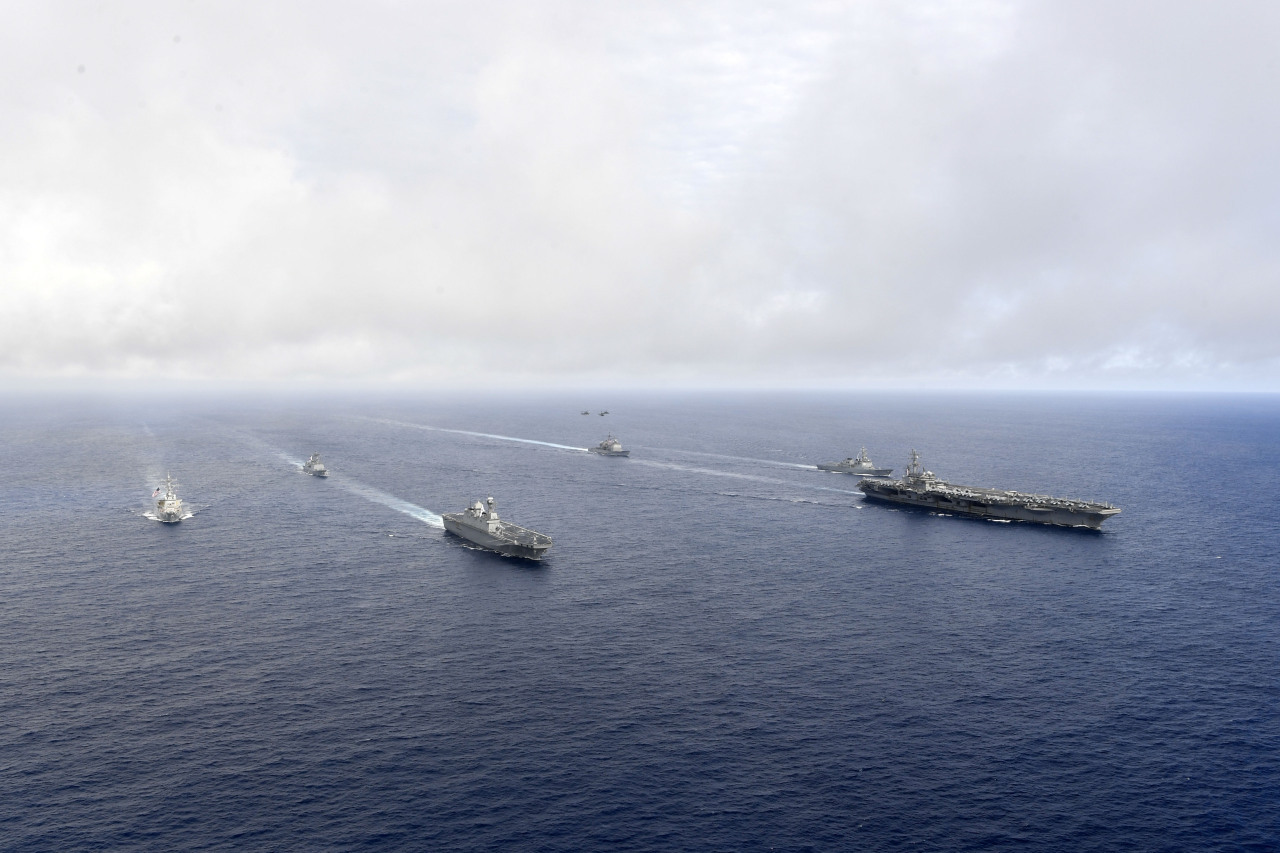 The US Navy’s nuclear-powered supercarrier USS Ronald Reagan (CVN 76) and its strike group take part in the bilateral military exercises with the South Korean Navy’s fleet between June 2 and 4 in the international waters southeast of the island prefecture of Okinawa, Japan. (File Photo - South Korea’s Joint Chiefs of Staff)
South Korea and the United States will discuss “concrete and stronger measures” to counter North Korea’s existential and mounting threats and enhance the viability of the US extended deterrence at the upcoming high-level strategic talks, senior South Korean officials said.

The two countries will hold a vice ministerial-level meeting of the Extended Deterrence Strategy and Consultation Group, or EDSCG, in Washington on Friday for the first time since January 2018.

“South Korea and the US will discuss more concrete and stronger countermeasures in response to North Korean threats and provocations,” First Vice Foreign Minister Cho Hyun-dong said Wednesday at Incheon Airport before departing for the US.

Cho said the meeting will be held as “North Korea announced the legislation of its policy on nuclear forces and the possibility of North Korea’s provocations including a seventh nuclear test is growing.”

The two sides will “have a quite in-depth discussion” on how and when to strengthen the US extended deterrence and the level of South Korea’s contribution and role in the process, Cho added.

South Korea’s Vice Defense Minister Shin Beom-chul said Tuesday that the bilateral meeting will serve as a venue to “affirm the US’ reinforced extended deterrence commitment” to South Korea, after he arrived at Dulles International Airport near the US capital.

Shin went on to say that South Korea and the US will “discuss concrete steps to enhance the viability” of the US extended deterrence at the forthcoming EDSCG meeting.

Cho and Shin will represent the South Korean side during the EDSCG meeting, while the US delegation will be led by Ambassador Bonnie Jenkins, the undersecretary of state for arms control and international security, and Dr. Colin Kahl, undersecretary of defense for policy.

During his trip to the US, Shin will also visit Joint Base Andrews in Prince George’s County, Maryland, where he expects to see US strategic assets as well as the US Missile Defense Agency and US Cyber Command.

Speaking at the impromptu press briefing, Shin also underscored that South Korea and the US have “advanced discussions on how both sides share assessments on North Korean threats and come up with countermeasures” and how they can flesh out the US commitment to provide extended deterrence.

The current focus of South Korea and the US is to build allies’ confidence in the US extended deterrence as well as to enhance their readiness for a potential nuclear test and devise necessary measures to reassure the people in the scenario, Shin said.

South Korea and the US will resume the EDSCG meeting at a critical juncture after an almost five-year hiatus. North Korea’s rubber-stamp parliament on Sept. 8 passed a new law that legitimizes the possession of nuclear weapons and its nuclear buildup, and which allows a preemptive nuclear strike under certain circumstances. South Korea and the US also assess that North Korea is ready to conduct a nuclear test.

The upcoming EDSCG meeting is a follow-up measure to the commitment launched by South Korean President Yoon Suk-yeol and US President Joe Biden at the May 21 summit. Both sides agreed to reactivate the EDSCG at the earliest date.

After Seoul and Washington agreed to establish the EDSCG in October 2016, a total of two meetings were held, in December 2016 and January 2018.

Enhancing the viability of the US extended deterrence is the core of the Yoon Suk-yeol government’s two-pronged strategy to counter and deter North Korea’s escalating missile and nuclear threats.

Apart from the reactivation of the EDSCG, South Korea and the US also agreed to reinforce tabletop exercises, or TTXs, on the use of the deterrence assets and deployment of US strategic assets to reinforce the US extended deterrence. The TTXs allow South Korea and the US to practice joint military responses in simulated contingency scenarios, including North Korean nuclear threats and the use of nuclear weapons.

As part of efforts to enhance alliance deterrence, the US Navy’s USS Ronald Reagan (CVN-76), a 100,000-ton nuclear-powered supercarrier, will enter the port of Busan next week in an apparent show of force against North Korea, according to South Korean military sources. A nuclear-powered aircraft carrier is among the strategic US military assets.

In an interview with The Korea Herald last week, Shin said the Yoon government seeks to substantially reinforce cooperation with the US at all levels to strengthen the US extended deterrence. The deployment of strategic assets on the Korean Peninsula is one such example.

Shin also underlined that the Yoon government has been working together with the US to “formulate detailed plans” to strengthen the US extended deterrence when compared to the Moon Jae-in government.