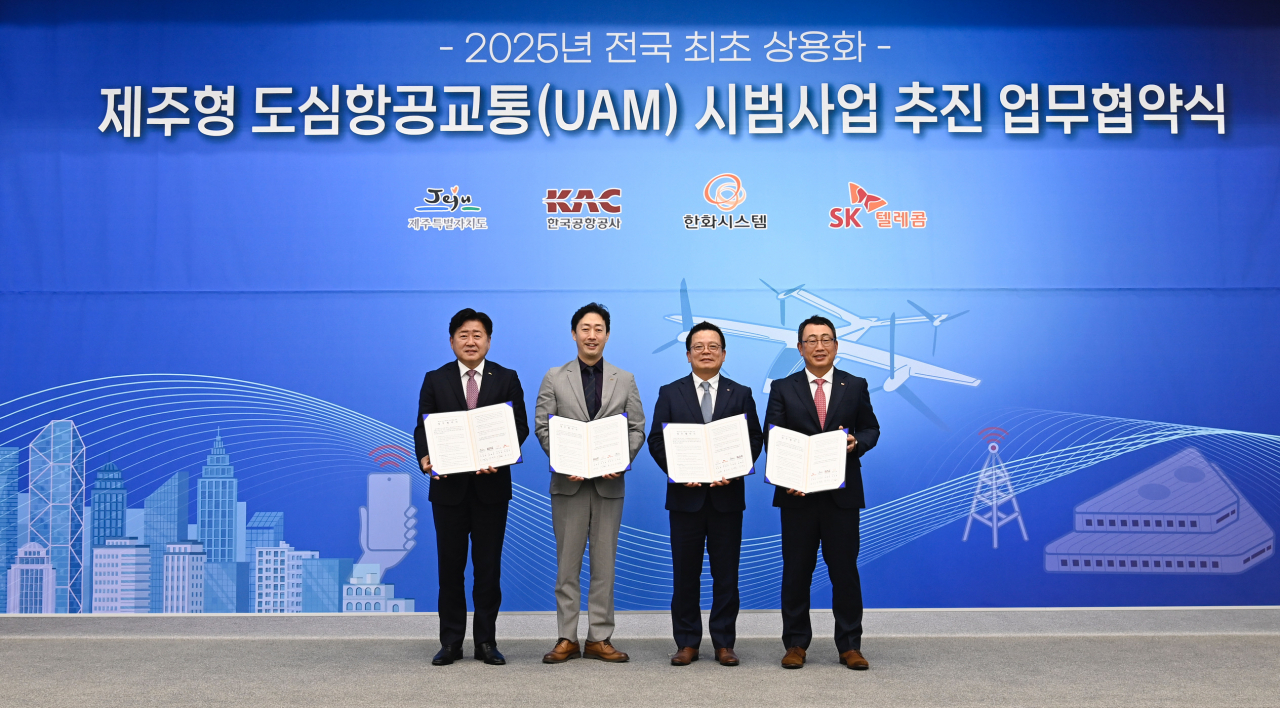 At an agreement signing ceremony with Jeju Special Self-Governing Province Wednesday, the firms announced that they would work together to make the resort island the country’s first municipality to have commercial routes for flying cars.

The news confirms a report by The Korea Herald last month that Jeju will launch three air routes dedicated to tourists in the island by 2025.

The three firms joined hands for a UAM consortium in April to launch the future mobility business under the government’s plan to run UAM services after undergoing safety inspections in 2023 and 2024.

Following the Transport Ministry’s submission of a draft bill last month that would set up requirements and regulations for UAM, the firms said Jeju would be a test bed for developing the aviation system and infrastructure for UAMs.

The resort island’s various attractions and accessibility as a top holiday destination among Koreans have spurred the need to commercialize the UAM route.

Hanwha Systems will work on developing the UAM aircraft and run the entire manufacturing, sales and maintenance, repair and operations processes, while SK Telecom would operate the mobility platform and manage the telecommunication system for UAMs with US aviation startup Joby Aviation. Korea Airports Corp. will establish vertiports for UAM and provide a traffic management system by leveraging its aviation safety facility infrastructure. Jeju Island will support the firms by forming an ecosystem for UAMs, approving land use permits and providing the required infrastructure.

Currently, Hanwha Systems is working with US future mobility startup Overair to build an electric vertical takeoff and landing aircraft called Butterfly. Next year, the real-sized UAM aircraft will go on a test flight, targeting to receive approval from the US Federal Aviation Administration and achieve a type certificate, which signifies the airworthiness of an aircraft, according to the firm.

“Our consortium would lower the public’s mental hurdle toward the new transportation by launching the service in Jeju, where various tourism and culture resources welcome visitors,” said Hanwha Systems CEO Uh Seong-cheol.

SKT CEO Yoo Young-sang said the firm would be a “game changer” in the future mobility industry by developing Jeju Island as the foothold of South Korean UAM.