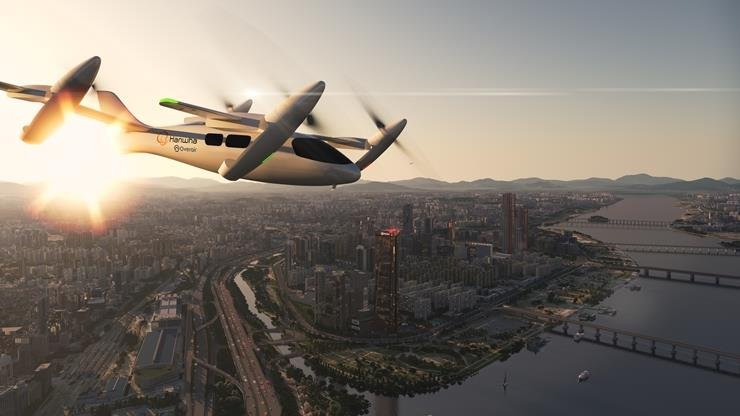 This image provided by Hanwha Group on June 14, shows a rendered model of Butterfly, an all-electric vertical take-off and landing aircraft, or "flying taxi," under development by South Korea's Hanwha Systems and US eVTOL developer Overair. (Hanwha Group)

The K-UAM Dream Team Consortium, comprising the two companies and the Korea Airports Corp., the Korea Meteorological Institute and LX, a state-run land information provider, signed an agreement to launch the commercial pilot project on Jeju Island in 2025.

A signing ceremony was held at the provincial government office.

UAM is widely considered the next big thing in urban mobility amid concerns of worsening of traffic congestion and air pollution. Most UAM vehicles in development are being designed to run on electricity and travel at low altitudes in urban areas.

The consortium said it plans to build "vertiports," or UAM aircraft take-off and landing sites, and a traffic management system to transport travelers between Jeju International Airport and major tourist destinations on the island.

The provincial government will provide sites for UAM operations and infrastructure. It will also offer licensing and administrative support to create a UAM ecosystem on the island.

SK Telecom CEO Ryu Young-sang said the consortium will "push forward the development of Jeju Island through our UAM innovation technology" and emerge as a game changer for future mobility services.

The deal is the latest in South Korea's effort to offer commercial UAM services in 2025, with several other multi-company consortiums also pursuing similar projects.

The transportation ministry is in the process of evaluating candidates to participate in the K-UAM Grand Challenge, a government-led demonstration program that will test UAM vehicle safety and traffic management capabilities for commercial services. It plans to announce select consortiums to participate in the first stage of the project in November. (Yonhap)