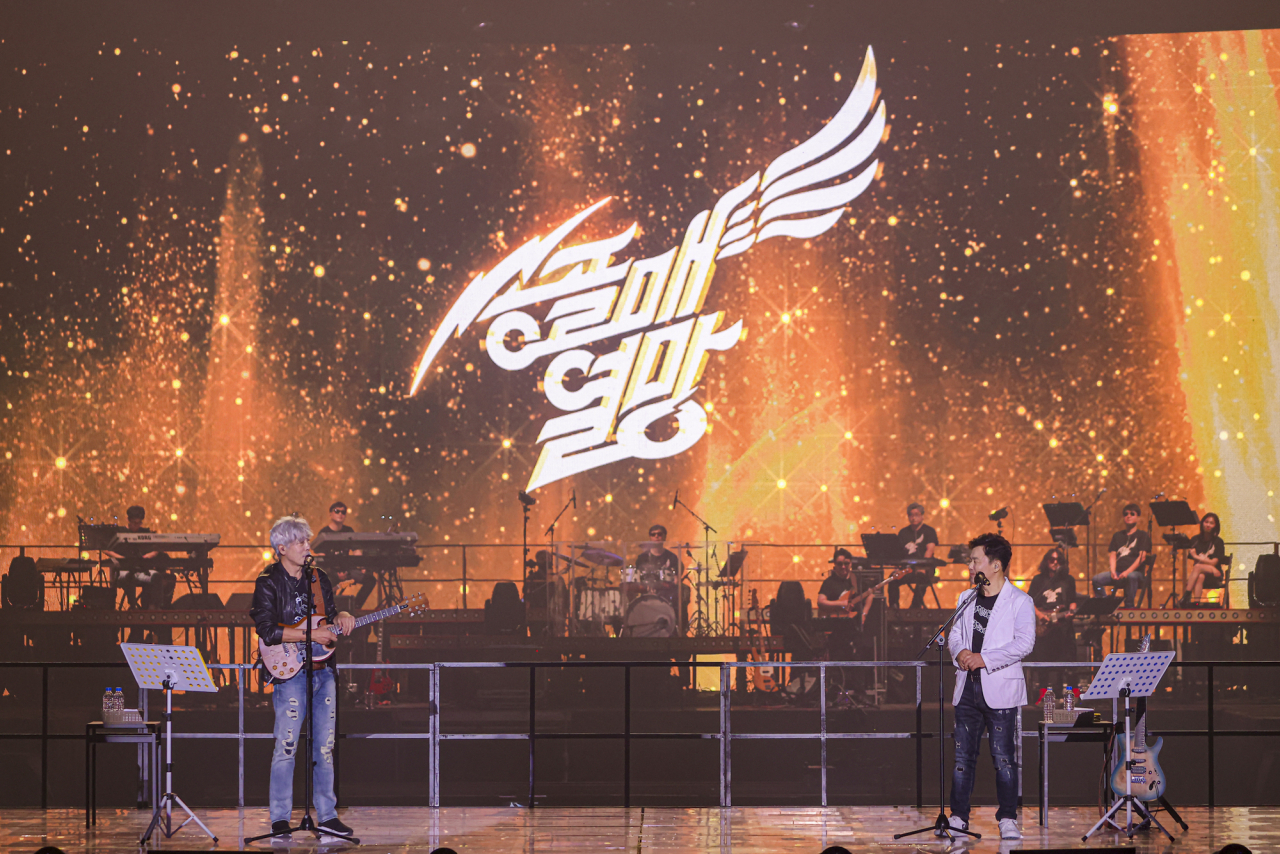 There's a saying that new things are always better than old, but the power of a classic is something to hold on to. It brings back old memories and allows us to reminisce on the good old days.

To revive Korean listeners’ memories of the 1980s, renowned rock band musicians Bae Cheol-soo and Koo Chang-moo gathered for a nationwide concert tour after 38 years apart. The rock 'n' roll event was the ticket to an adventure back in time for both the artists and audience of some 9,500.

Despite the long Chuseok weekend on a rainy Sunday evening, a strong audience flocked to the KSPO Dome at Olympic Park in southern Seoul to enjoy Songolmae’s long-awaited reunion. The majority appeared to be middle-aged couples or elderly parents who came with their children.

As the clock ticked toward 7 p.m., the lights went down and a giant falcon splashed across screens at the venue, soaring sky high. It was a signal to the iconic band’s appearance onstage. As Bae, formerly the vocalist and guitarist of the band, and Koo, the former lead vocalist, came on the main stage, fans expressed their excitement with loud cheers and applause.

The bandmates were dressed in 1980s style, in distressed jeans and either plain white or black leather jackets. They shared high-fives with big smiles and kicked off the concert with megahit songs “Accidental Encounter” (1982) and “Let’s Gather” (1990).

“I am choked up and feel a lump in my throat to perform on such a huge stage like this. Thanks to my friend Bae Cheol-soo,” Koo said. Bae also thanked Koo and said, “I can hardly believe my eyes. Making a change in my hairstyle and strapping on my guitar feels like I’m in my 20s again.”

Songolmae, established by Bae in 1979, led the country’s rock music scene in the 1980s with numerous hit songs. Koo joined the band in 1982 but left two years later. The band continued with new members, but stopped performing after releasing its ninth album in 1990. Bae has since hosted a radio show for 33 years, while Koo left the musical scene to run his own business.

Earlier in May, the legendary band announced that it would embark on a nationwide tour entitled “Yeolmang,” meaning “aspiration.” The concert’s title expresses the band members’ hopes to show the passion and desire they had in their 20s for rock music. It is also the band’s gift to the fans who have shown continuous support, the bandmates said at a press event in July.

Bae half-jokingly said the average age of the band’s audience would be the oldest among all local rock concerts. He continued by asking them to revert to their teens and 20s, when they were full of longing. The two musicians belted out a string of hits, including “Do Not Know and Lived the World,” “All Works of the World” and “Rainwater.” 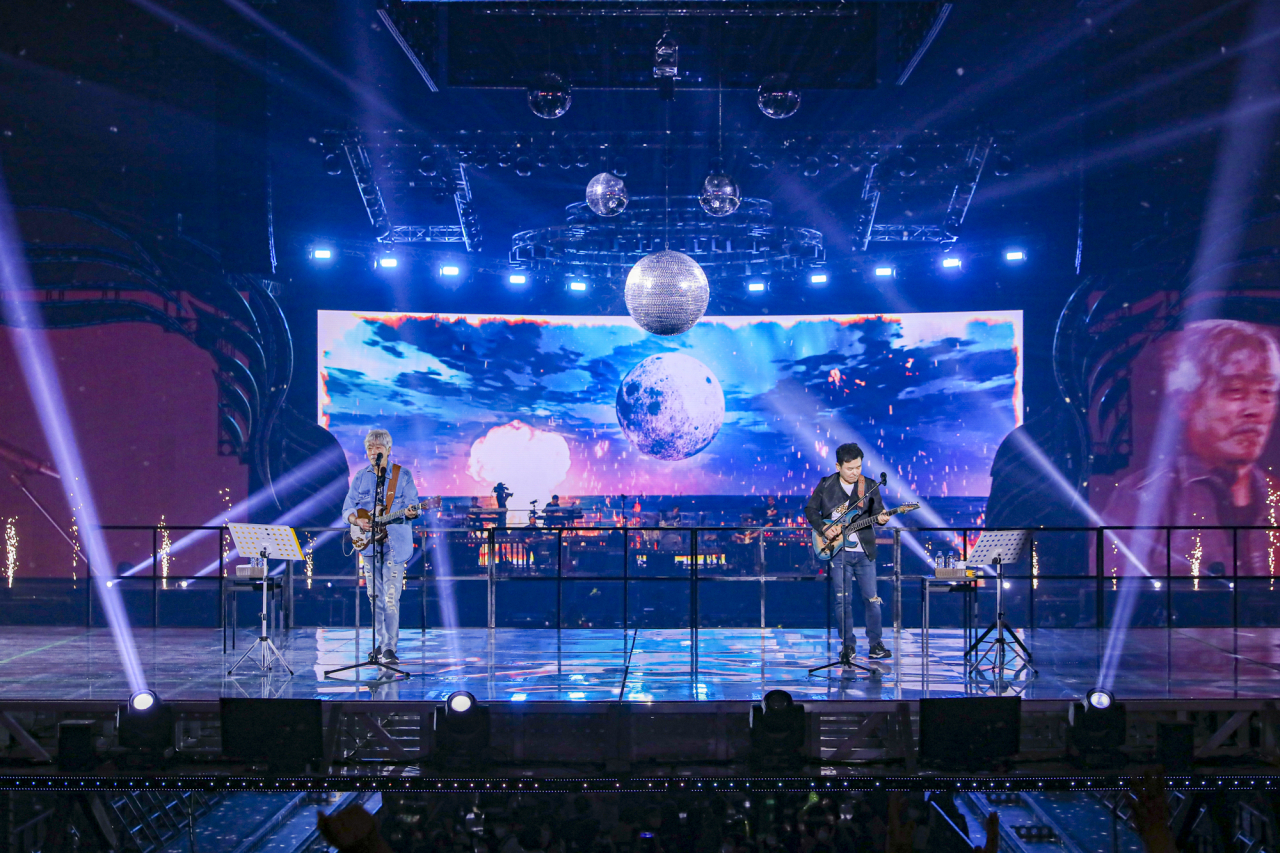 The Sunday concert also included the two musicians’ solo performances, with three songs each. Koo transformed into a ballad singer for “Heenari,” “Lonely, Lonely” and “Matured Off Pain,” while Bae performed “A Nicked Circle,” “You & Me” and an acoustic version of “Love, the Beautiful and Precious Stories.”

Other interesting moments in the reunion came in their personal yet witty conversations for all to hear, recalling memories of their first encounter and squabbling about Koo’s departure. The performance delighted concertgoers’ eyes as well, with a moving stage that brought Bae and Koo closer to the cheap seats.

As the artists got closer to the audience, some middle-aged women in the audience started waving their light sticks vigorously like teenage fans screaming at the top of their lungs. Meanwhile, other fans jumped out of their seats to make heart shapes with their arms. 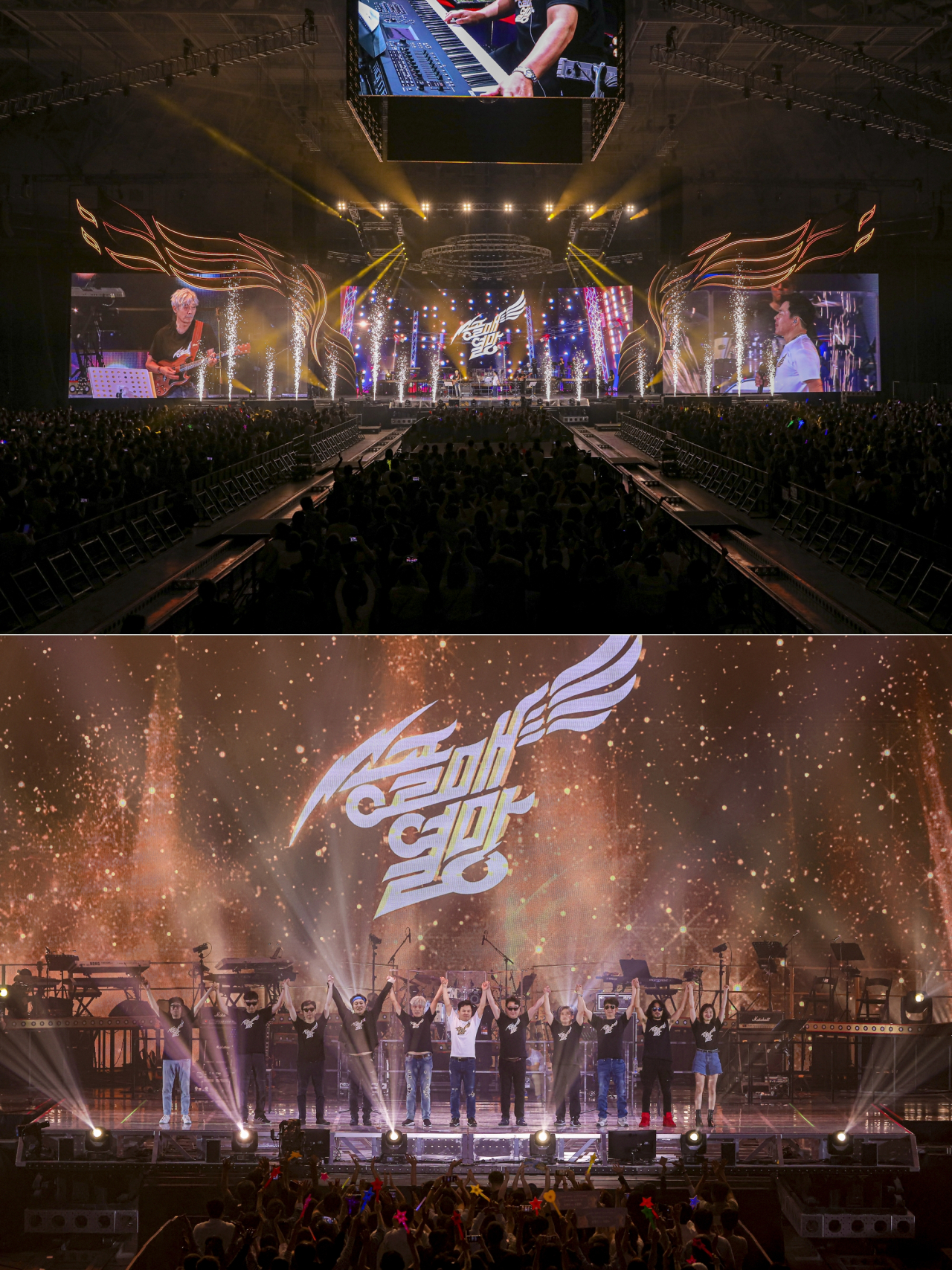 Songolmae appears on the stage during the "Yeolmang" concert at the KSPO Dome at Olympic Park in southern Seoul, Sunday. (Dream Maker Entertainment)

The concert was originally scheduled for a two-hour run, but took another 40 minutes to wrap up. With teary eyes, Bae said, “This was a miraculous moment for us. We didn’t know this day would come!” Koo added, “These moments will remain in our hearts forever.”

Songolmae performed 27 songs in total and bid farewell with encore performances showcasing “Accidental Encounter” once more, along with “Love All.” Although the two best-known members of the rock band now have wrinkles around their eyes and gray hair as they near their 70s, they remain youthful singers in fans’ hearts, stimulating their nostalgia.

The reunion tour will likely be the renowned rock band musicians’ final performances as members of Songolmae. After the two wrapped up two days of concerts in Seoul, drawing around 20,000 people in total, they will subsequently perform in Busan, Daegu, Gwangju and Incheon through Nov. 12. They will also embark on a US tour in March.