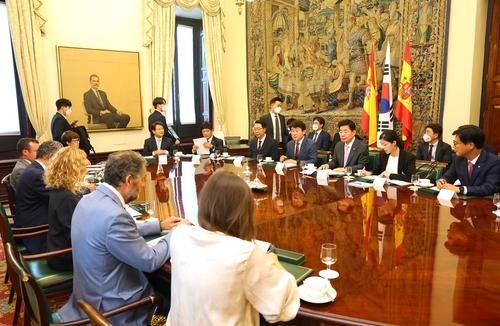 MADRID -- National Assembly Speaker Kim Jin-pyo met with the leader of Spain's Congress of Deputies to discuss ways to enhance economic cooperation between the two countries, his office said Tuesday.

Kim held a 70-minute meeting with Meritxell Batet Lamana, president of the Spanish Congress of Deputies, in Madrid on Monday (local time) in the first official visit by a South Korean speaker to the country in 14 years.

The meeting came as part of efforts to strengthen parliamentary cooperation between the two countries after Seoul and Madrid agreed to elevate their bilateral relationship to a "strategic partnership" last year.

Noting the two countries have many similarities, Kim suggested they should expand joint business projects in the field of construction and infrastructure in regions like the Middle East, Latin America and Asia.

Batet highlighted South Korea's competence in digital transition and eco-friendly areas, which Spain is moving to prioritize. Kim said there is ample room for cooperation and promised parliamentary support for such agendas.

The South Korean speaker asked for Spain's support for South Korea's bid to host the 2030 World Expo in the southeastern port city of Busan. Batet said she understands that Busan is well-prepared for the event and wished for a successful bid. (Yonhap)