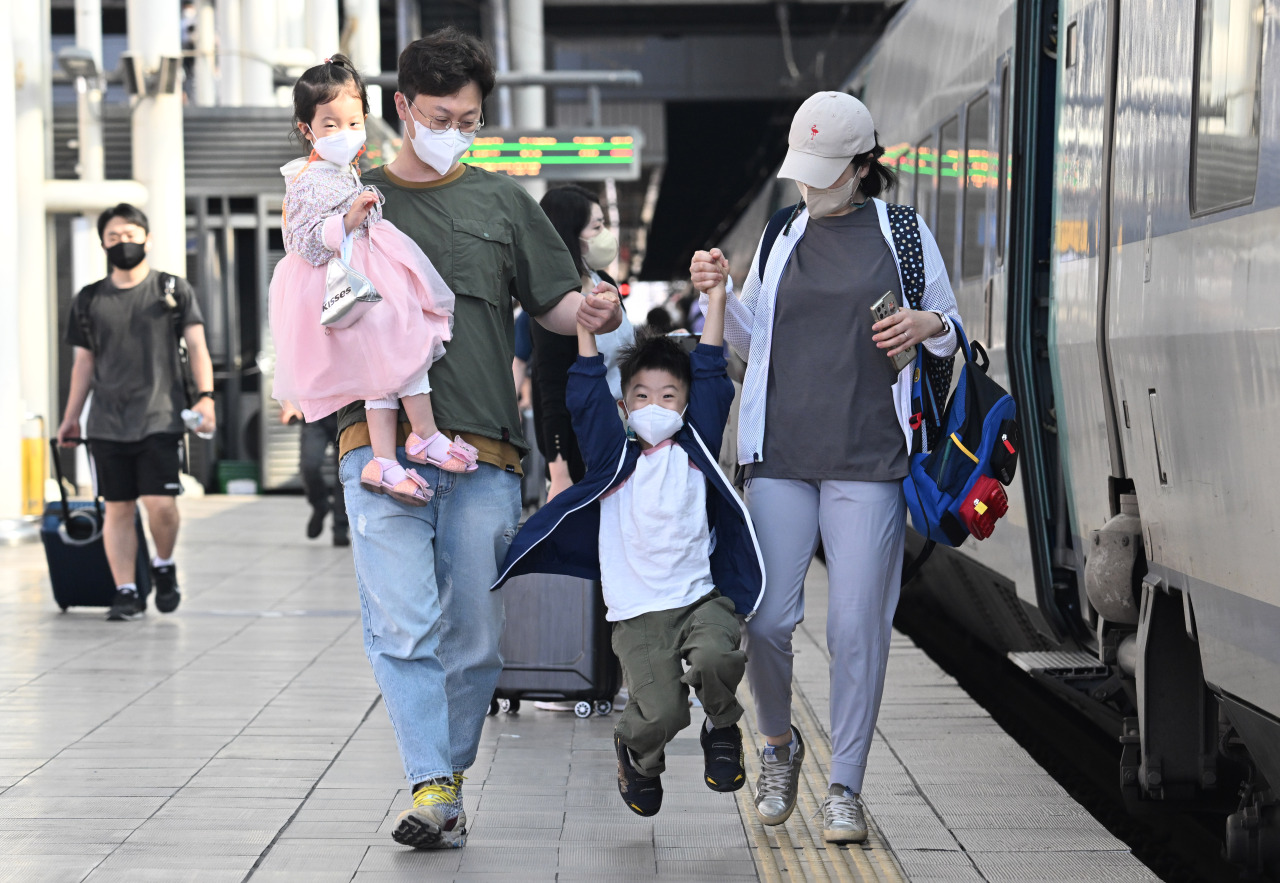 A family of four prepares to board a train at Seoul Station on Thursday, the eve of a four-day break for the Chuseok holiday. (Yonhap)
With inflation showing no signs of abating, South Koreans are likely to suffer more financial burden from eating out after the Chuseok holiday, as even low-cost foods like gimbap see a surge in price.

The average price of gimbap, one of the more budget-friendly meals, in Seoul surged 2.6 percent to surpass the 3,000 won ($2.2) mark as of August compared to a month earlier, according to data from the Korea Consumer Agency.

Among restaurant meals, the price of pork belly increased the most, from 18,056 won to 18,364 won for a 200-gram serving in the cited period. Kimchi jjigae with rice and a side dish saw a 1 percent increase to 7,500 won.

The price of jjajangmyeon, or noodles with black soybean sauce, remained the same as July (6,300 won), but it had by far the biggest price increase compared to last year.

Statistics Korea data showed the average cost of eating out skyrocketed by 8.8 percent, a record-high figure since October 1992.

The prices of grocery items ballooned as well. The cost of cereals spiked 13 percent, while ready-made soup and mayonnaise soared 6.7 percent and 6.6 percent, respectively.

Ramyeon, or Korean instant noodles, are also set to see a price increase.

Nongshim, the country’s leading ramyeon maker, recently said it will increase the price of Shin Ramyun and 25 other instant noodles by an average of 11.3 percent from Sept. 15. For instance, a bundle of five packs of ramyeon priced around 6,000 won will increase to 6,678 won.

Paldo also announced its plans to raise the price of ramyeon by 9.8 percent on average starting Oct. 1, citing rising raw material and logistics costs. The price of Paldo Bibimmyeon will jump from approximately 4,000 won to 4,392 won. The price for a bowl of the brand's Wangttukkung noodles will increase by 11 percent as well.

Industry sources say other ramyeon makers including Ottogi and Samyang will also likely hike prices after the Chuseok holiday that started Friday and runs through Sep. 12.

Park Na-yeon, a 32-year-old white collar employee said, “It seems everything is getting so expensive, except my salary. I have to pay around 8,000-9,000 won to eat ramyeon and gimbap these days. I can see why people go crazy for half-priced chicken.”

Supermarket chains have promoted pre-cooked chickens for around 5,000 won, prompting an “open run” for them. An open run is a term in Korea that refers to when customers dash into stores as soon as they open to get their hands on their desired item.

Experts say inflation might not have reached its peak yet due to the weak won and geopolitical uncertainties driven by the ongoing Russia-Ukraine war.

“The weak won against the dollar leads to trade deficit and high costs in importing raw materials, pushing inflation. This, in turn, might aggravate the already bad situation of the government and household deficit,” said Cho Dong-geun, an economics professor at Myungji University.