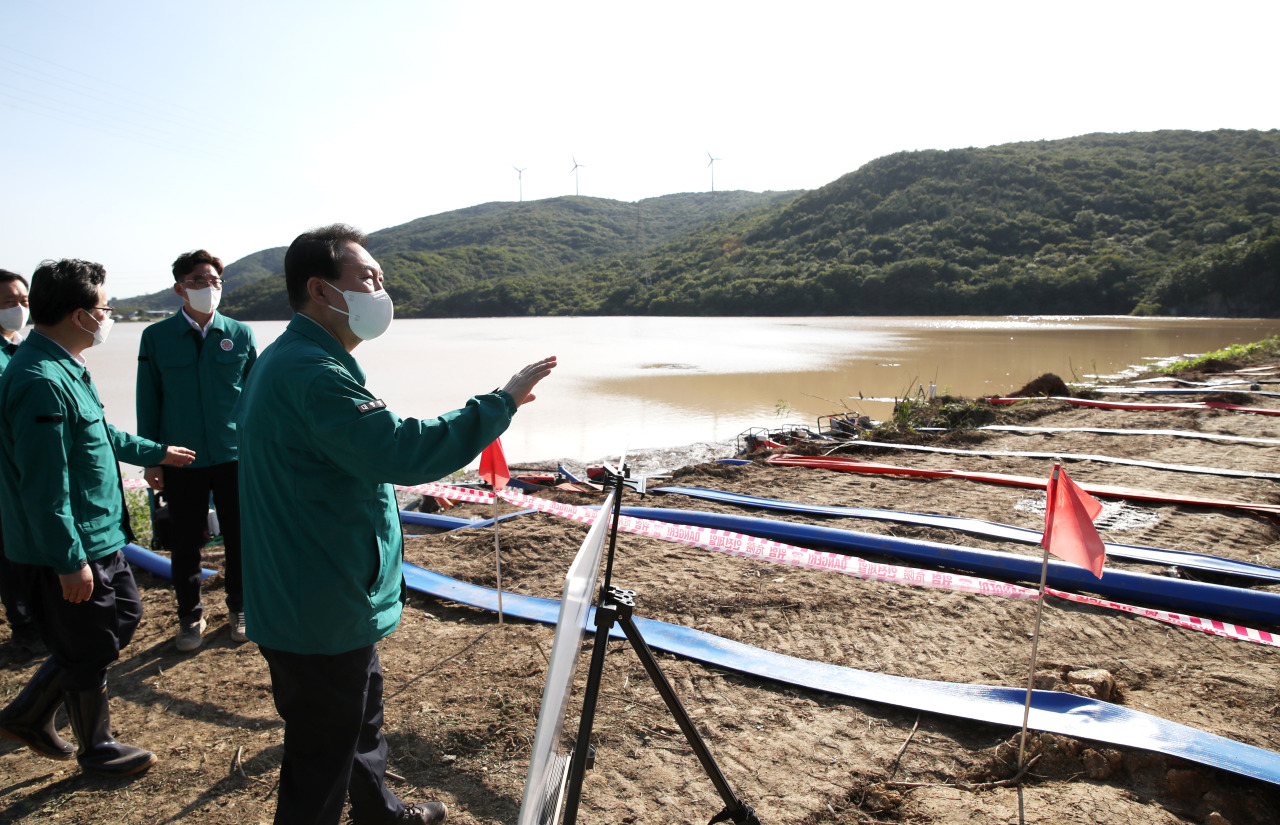 Yoon said he would carry out all procedures necessary for the designation as soon as possible and provide emergency funds to people in Pohang, about 270 kilometers southeast of Seoul.

As a special disaster zone, Pohang and Gyeongju will be eligible for financial support from the government for recovery work, relief funds for victims and other benefits.

Nine people were pulled from a flooded parking garage in Pohang between late Tuesday and early Wednesday. Two survived, while the seven others were found in a state of cardiac arrest and later pronounced dead.

All of them had been trapped in the underground parking lot of an apartment complex in Pohang after going there to move their cars amid heavy downpours brought on by the typhoon.

Yoon, who stayed at his office until past midnight to oversee the response to the typhoon, said he spent a "sleepless night" after the tragedy.

On Wednesday, he presided over a Cabinet meeting to assess the extent of damage from the typhoon.

"More than anything, I would like to offer my deep consolation to the people who suffered damage," he said at the meeting, noting the typhoon came only a month after the country suffered from deadly downpours.

Yoon thanked the people, the press and emergency response workers, saying their cooperation and effort helped lessen the damage.

Yoon said the government will approve an emergency initial fund of 50 billion won ($36 million) for recovery work, along with special grants, at the Cabinet meeting.

He also recalled the government earmarked 6.1 trillion won for natural disaster response in next year's budget, up 17 percent from this year, and called on Cabinet members to do their best to get the proposal passed through the National Assembly.

"The government will not let its guard down until the end with the determination that it is infinitely responsible for protecting the lives and property of the people," he said. "I will personally oversee every situation until everyone has fully returned to their everyday lives."

Later in the day, Yoon traveled to Pohang.

He met with residents of the apartment complex that suffered damage in the typhoon and went down to the garage.

After coming up, he promised the residents he will do his best to restore power as soon as possible and ease their hardships.

"I will make the special disaster zone declaration as soon as I return to Seoul," Yoon said. "I will do it today." (Yonhap)