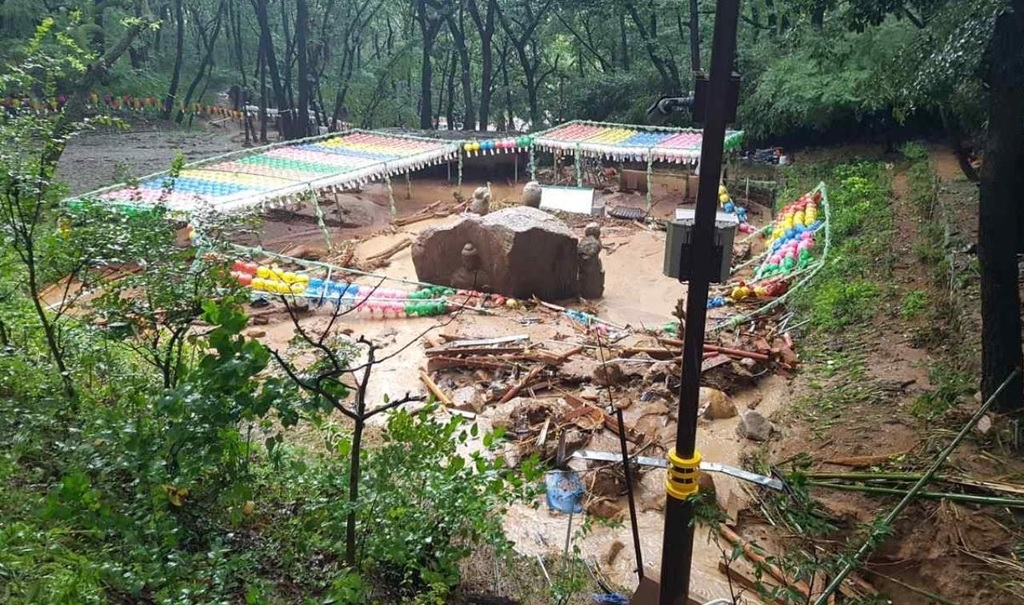 The Gulbulsa Temple Site in Gyeongju, North Gyeongsang Province, after a mudslide on Tuesday. (Yonhap). Seen in the middle is the National Treasure No. 121, Stone Buddhas in Four Directions.

A Buddhist temple site in the historic city of Gyeonggju, North Gyeongsang Province, has been struck by a mudslide triggered by heavy rains of Typhoon Hinnamnor, according to the Cultural Heritage Administration on Wednesday.

The hillside Gulbulsa Temple site, not to be confused with the city’s more famous Bulguksa Temple, had its wooden structures and trees knocked down, but its most precious treasure – the Stone Buddhas in Four Directions – appears mostly intact, the agency said.

Stone Buddhas in Four Directions stand amidst debris of a mudslide. (Yonhap)

The four-faced stone sculpture is engraved with four Buddhas -- the Amitabha on the west, the Bhaisajyaguru on the east, the Maitreya on the north, and the Sakyamuni on the south.

Along with Pohang, also in North Gyeongsang Province, Gyeonggju is one of the hardest hit by super-strong Typhoon Hinnamnor which passed through S. Korea early Tuesday morning.