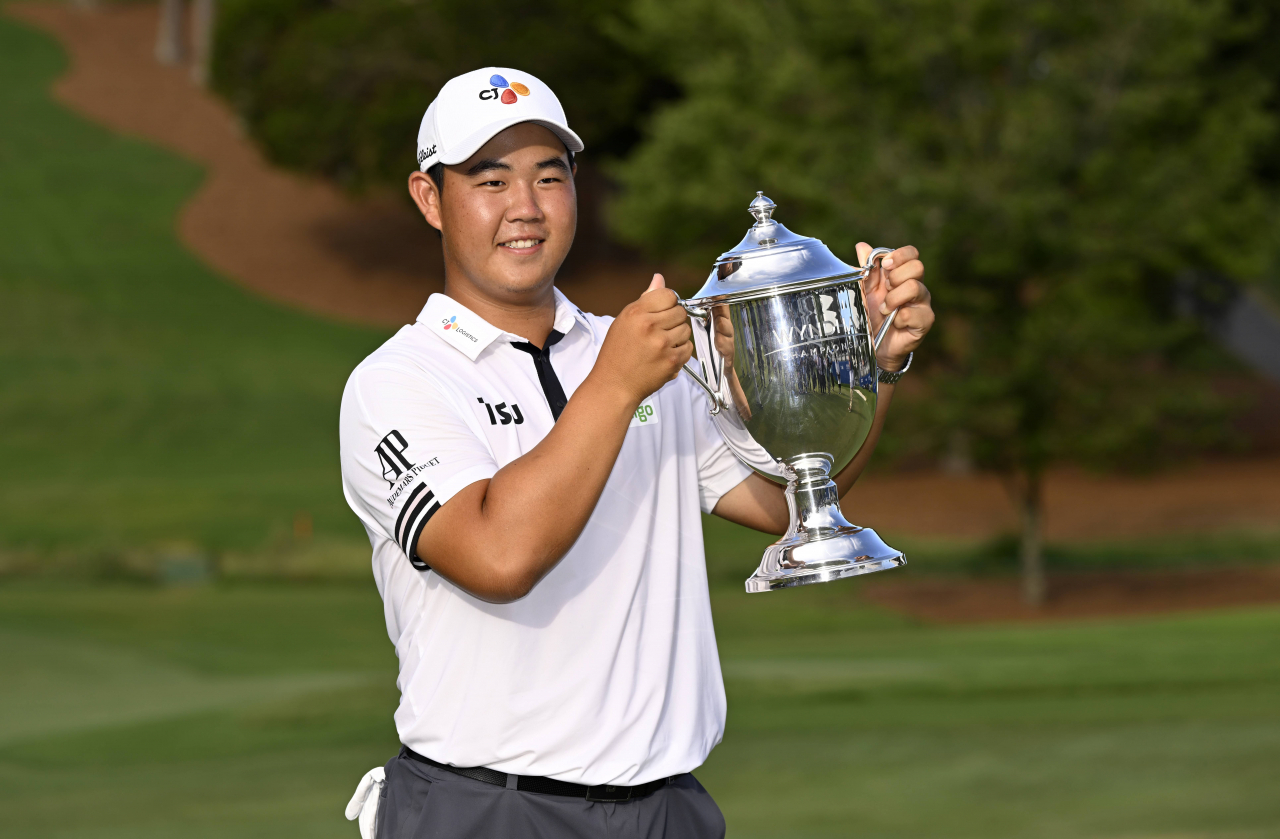 South Korea's Kim Joo-hyung is up for the top rookie award on the PGA Tour, on the strength of a stunning victory in August.

The PGA Tour announced three nominees for its Rookie of the Year honor, dubbed the Arnold Palmer Award, on Monday (US time). Kim, 20, has been shortlisted alongside two Americans, Cameron Young and Sahith Theegala.

The winner will be determined by votes from PGA Tour members who played in at least 15 official tournaments during the 2021-2022 season. The voting will close at 5 p.m. Eastern Time on Friday, and the winner will be announced at a later date.

Kim appeared in 11 tournaments last season and won the Wyndham Championship in August. He posted a pair of other top-10 finishes and ranked 35th in the FedEx Cup standings.

Kim, who had been playing on the Asian Tour and the Korean Tour, made a few appearances early in the 2021-2022 season as a nonmember. Then after the Open Championship in July, Kim accepted special temporary membership to join the PGA Tour. That status allowed Kim to enter as many tournaments as he could on sponsor's exemptions. Kim needed to earn as many FedEx Cup points as the No. 125 player to gain his PGA Tour membership and took care of business with a seventh-place finish at the Rocket Mortgage Classic at the end of July.

Kim then capped off a memorable summer with the breakthrough victory at the Wyndham Championship. Kim is the only nominee for the rookie prize with a victory.

Young, though, may have the upper hand given his consistency throughout the season. He counted five runner-up finishes among his seven top-10s in 25 starts. After qualifying for the Tour Championship, Young finished 19th in the FedEx Cup rankings, tops among all rookies.

Theegala had five top-10s in 32 events and also qualified for the Tour Championship. He was 28th in the FedEx Cup standings.

South Korea has had one Rookie of the Year winner so far, with Im Sung-jae topping the player voting for the 2018-2019 season. Im remains the only Asian-born honoree of the top rookie award.

Im didn't have a victory that season, while the two other candidates, Matthew Wolff and Collin Morikawa, each had a win apiece. But Im led all rookies by finishing tied for 19th in the FedEx Cup points and was the only freshman to qualify for the Tour Championship that season. (Yonhap)