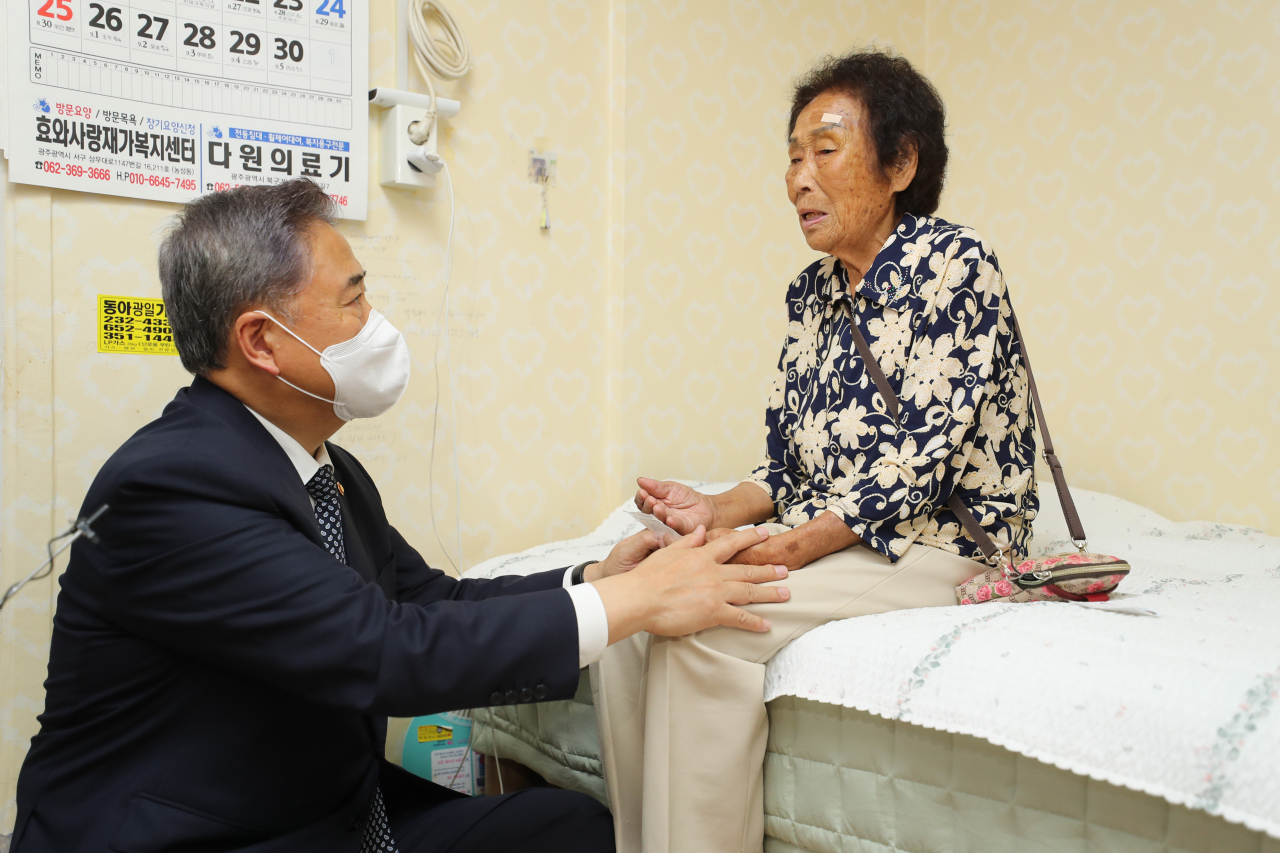 South Korea Foreign Minister Park Jin (left) speaks with Yang Geum-deok, a survivor of wartime forced labor, in Gwangju on Friday. (Yonhap)
With the top court’s decision on wartime forced labor case being pushed back, the government is striving to come up with a diplomatic solution to a legal dispute that has risen as a major point of political friction with Japan.

The Supreme Court was expected to deliver a final ruling on the case of Korean victims seeking liquidation of Japanese firms’ assets to provide as compensation for forced labor during the Japanese occupation of Korea from 1910 to 1945.

The decision was apparently pushed back following the retirement of Kim Jae-hyung, the chief prosecutor who was in charge of the case, on Friday. As a successor has not been decided, it is expected to take weeks before the top court will be able to deliver its ruling on whether or not to liquidate the assets of the Japanese firms.

South Korea’s Yoon Suk-yeol administration, which seeks to revive long-strained ties with Japan for security reasons, has been striving to find a solution as it is caught in the middle between Tokyo and the Korean victims.

Japan, which argues that claims related to its annexation of Korea were settled once and for all by an agreement signed in 1965, has strongly protested the Seoul court rulings, and threatened that Seoul would be crossing a “red line” if it carries out the liquidation.

The Korean government is also tasked with appeasing its nationals seeking sincere apologies from the Japanese firms.

Foreign Minister Park Jin traveled to Gwangju in South Jeolla Province on Friday to pay visits to two survivors of wartime forced labor for the first time since he came into office in May.

The foreign minister visited one of the survivors, 98-year-old Lee Choon-sik, and told Lee, “The government has a very strong will to resolve the problem of the forced labor victims fast and with sincerity.”

Park added: “I will diplomatically negotiate with Japan to find a solution that can be accepted by the people.”

Lee was forced to work at Nippon Steel’s steel mill in Kamaishi, Japan, in January 1943. In Korea, Lee won the case against Nippon Steel, in which a Korean court ordered the Japanese company to provide compensation of 100 million won ($73,000) to Lee and three other Korean victims. The Japanese firm refused to comply with the court ruling, dragging the legal dispute further for the court to decide on the liquidation of its assets in Korea.

In July, Seoul launched a government-private consultative group to collect the opinions of experts and the victims. However, the victims’ representatives stopped participating in the group after the second meeting when the Foreign Ministry delivered a written opinion explaining its “diplomatic efforts” to resolve the issue. The victims viewed it as the government intervening in the court case to delay the final decision.