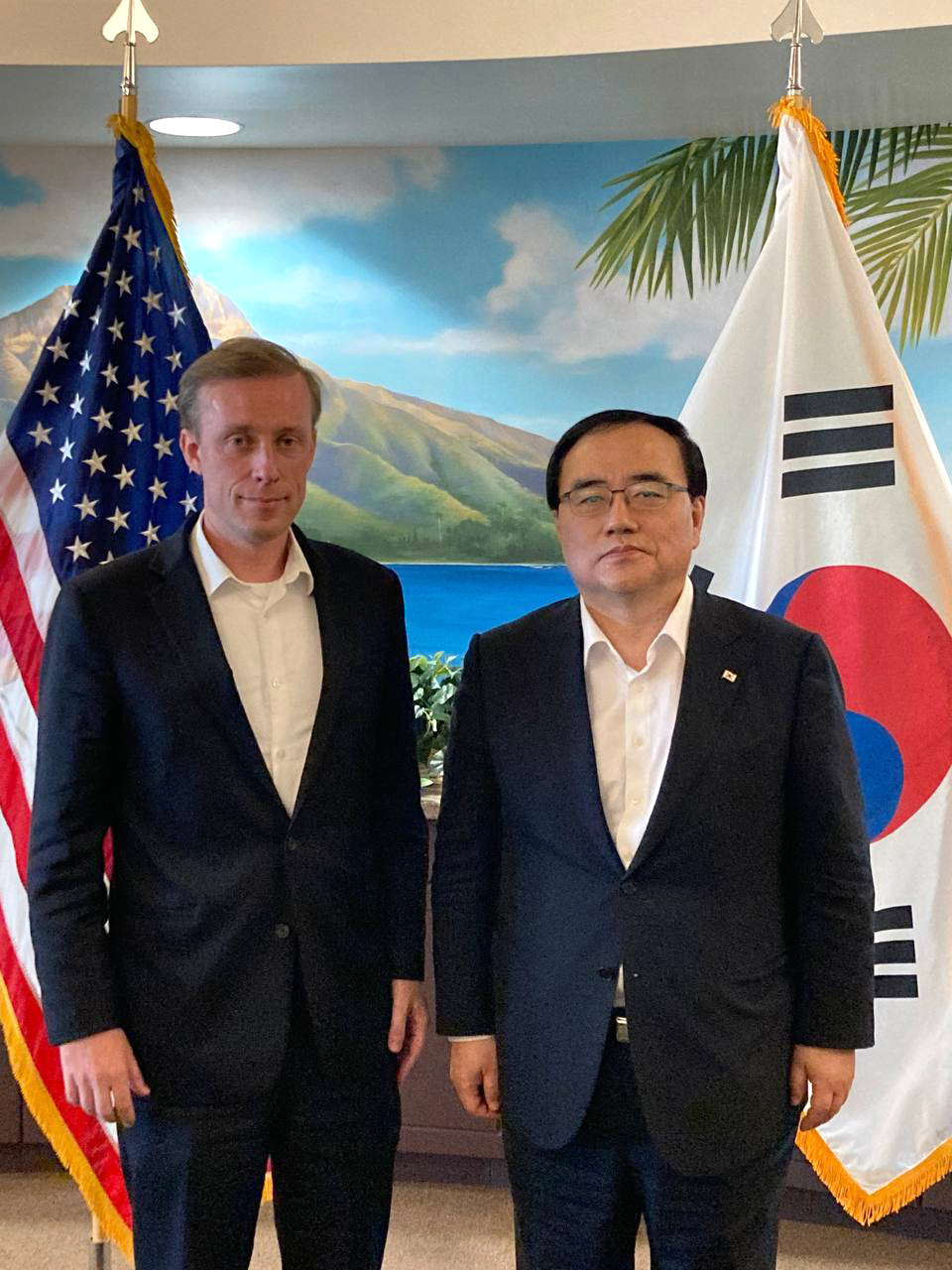 South Korea’s National Security Advisor Kim Sung-han (right) pose with US National Security Advisor Jake Sullivan in Honolulu, Hawaii on Thursday. (Yonhap)
South Korea, Japan and the United States agreed to join forces to take strong measures against North Korea if it conducts a nuclear test, to make sure the regime understands it has clearly made a “wrong decision,” Seoul’s security chief said on Thursday (US time).

The three countries also vowed to come up with a joint response to prevent disruption in the global supply chain, South Korea’s National Security Advisor Kim Sung-han said after a meeting with his US and Japanese counterparts.

“The three countries agreed to further strengthen cooperation to maintain peace and stability on the Korean Peninsula and the region,” Kim said, speaking to reporters before returning to Seoul.

“The (speculated) nuclear test should not be perceived as just one more nuclear test to the past six. So we will maximize our joint efforts together with international society to make sure the North understands that its seventh nuclear test is a clear mistake.”

Kim also said the reactions of the three countries would “certainly be different from those until now,” when the North carries out the seventh nuclear test.

On their trilateral cooperation on extended nuclear deterrence, Kim said it is a topic that should first be handled between South Korea and the US.

Further details on extended nuclear deterrence will be discussed in the meeting of the Extended Deterrence Strategy and Consultation Group between Seoul and Washington, slated for mid-September, Kim added.

The intelligence authorities in Seoul and Washington assess that the North appears to have finished all preparations to carry out a nuclear test. Pyongyang conducted its sixth nuclear test in September 2019.

At the trilateral meeting, Kim also promoted the Korean government’s “audacious initiative,” under which it would provide aid and economic benefits to the North in return for its steps toward denuclearization.

Both the US and Japan showed positive responses to the audacious initiative scheme and said they would cooperate, Kim said.

In the meeting with the US security advisor, Kim had delivered Korea’s concerns over the US Inflation Reduction Act that was recently signed by US President Joe Biden.

The new law, signed on Aug. 16, allows a government credit of up $7,500 for each electric vehicle purchase, but only to cars that are built in North America. This means stripping away subsidies from most Korean EVs exported to the US, dealing a heavy blow to Korean automakers.

In their bilateral talks, Sullivan agreed to have the US National Security Council review Korea’s concerns and possible damages the law can have on the Korean auto industry, according to Kim.