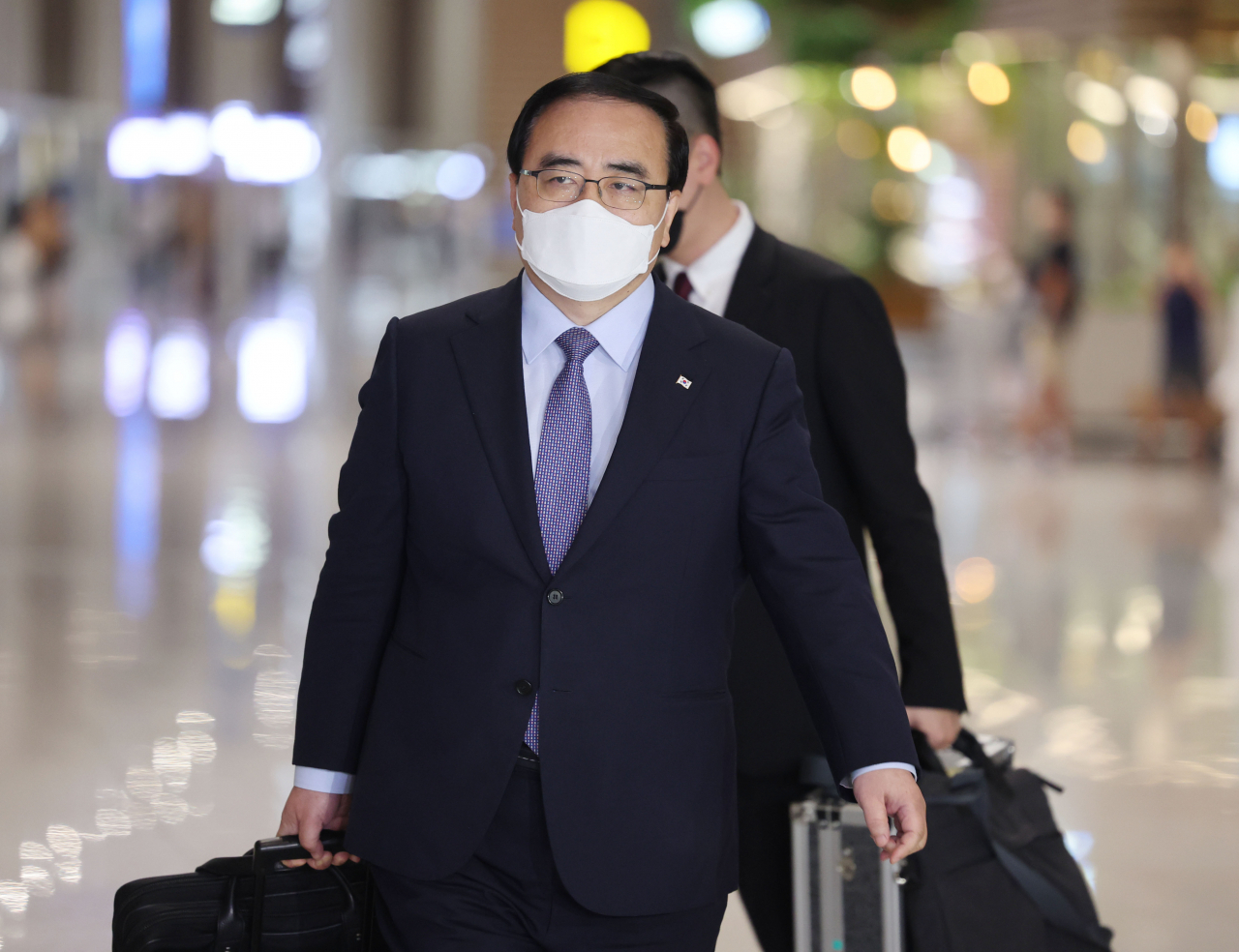 National Security Adviser Kim Sung-han leaves for Hawaii at Incheon International Airport, west of Seoul, on Wednesday, to attend a meeting with his US and Japanese counterparts, Jake Sullivan and Takeo Akiba, respectively. (Yonhap)

HONOLULU -- South Korea, Japan and the United States agreed to stern measures against a new nuclear test by North Korea, South Korea's top security adviser said Thursday, adding the countries' reaction will be different from those of the past.

Kim Sung-han made the remarks after a trilateral meeting with his US and Japanese counterparts -- Jake Sullivan and Takeo Akiba -- in Honolulu.

"(We) agreed that there must not be naive thinking or reaction that North Korea has conducted six nuclear tests and that (a new test) will only be one more nuclear test," Kim told reporters before heading home.

"Should North Korea conduct its seventh nuclear test, our reaction will certainly be different from those until now," he added.

Officials in Seoul and Washington earlier said the North appears to have completed "all preparations" for a nuclear test and that it may only be gauging the timing.

Pyongyang conducted its sixth and last nuclear test in September 2017.

Kim declined to comment on any specific steps the three countries may take against a new North Korean nuclear test but said they will be "maximized" toward making Pyongyang realize that it was a "wrong decision" to conduct a seventh nuclear test.

The three-way meeting between the top national security advisers of South Korea, Japan and the US marked the first of its kind in 16 months, as well as the first since Kim took office earlier this year.

It also comes after South Korean President Yoon Suk-yeol offered to launch aid projects for the impoverished North as long as Pyongyang showed its commitment to denuclearize in what his government calls an "audacious plan."

Kim said both the US and Japan have shown "positive reactions" to the South Korean initiative, aimed at restarting dialogue with North Korea.

"(The three countries) agreed to work closely toward making North Korea accept the offer," he said.

Kim said the three countries have also agreed to take joint efforts against any actions that disturb global supply chains.

Kim earlier said Sullivan has agreed to have the White House National Security Council look into South Korea's concerns over the US Inflation Reduction Act.

The act, signed into law on Aug. 16, allows a government credit of up to US$7,500 for each electric vehicle purchase, but only to cars built with batteries produced in the US, excluding all South Korean exports from the benefit despite the Korea-US free trade agreement that guarantees South Korean products the same treatment as domestic goods or those from a most favored nation.

South Korea's presidential office said in a press release that the three officials had wide-ranging discussions on the North Korean nuclear issue, cooperation on advanced technologies and supply chains, and key regional and international issues.

The three agreed during their trilateral meeting to "further strengthen cooperation between the three countries aimed at contributing to peace and stability on the Korean Peninsula and in the region," it said.

The presidential office also said Kim used his bilateral meeting with Sullivan to deliver South Korean businesses' concerns about the Inflation Reduction Act and the CHIPS and Science Act.

"He called for the US National Security Council's active cooperation and interest in resolving these," it said.

In his meeting with Akiba, Kim explained the "audacious plan" and asked for Japan's cooperation while discussing ways the two countries can work together to respond to North Korea's nuclear and missile provocations.

The two also exchanged views on ways to improve the bilateral relationship, the office said.

On Wednesday night, Kim attended a welcome reception hosted by Commander of Indo-Pacific Command Adm. John Aquilino for the delegations of the three nations.

"We assess that through the meeting between the national security advisers of South Korea, the US and Japan, the three countries were able to share their assessments of the current situation on the Korean Peninsula and in international affairs, hold in-depth discussions on ways to cooperate going forward, and further strengthen the close cooperation system through which we can communicate and cooperate frequently in the future," the office said. (Yonhap)