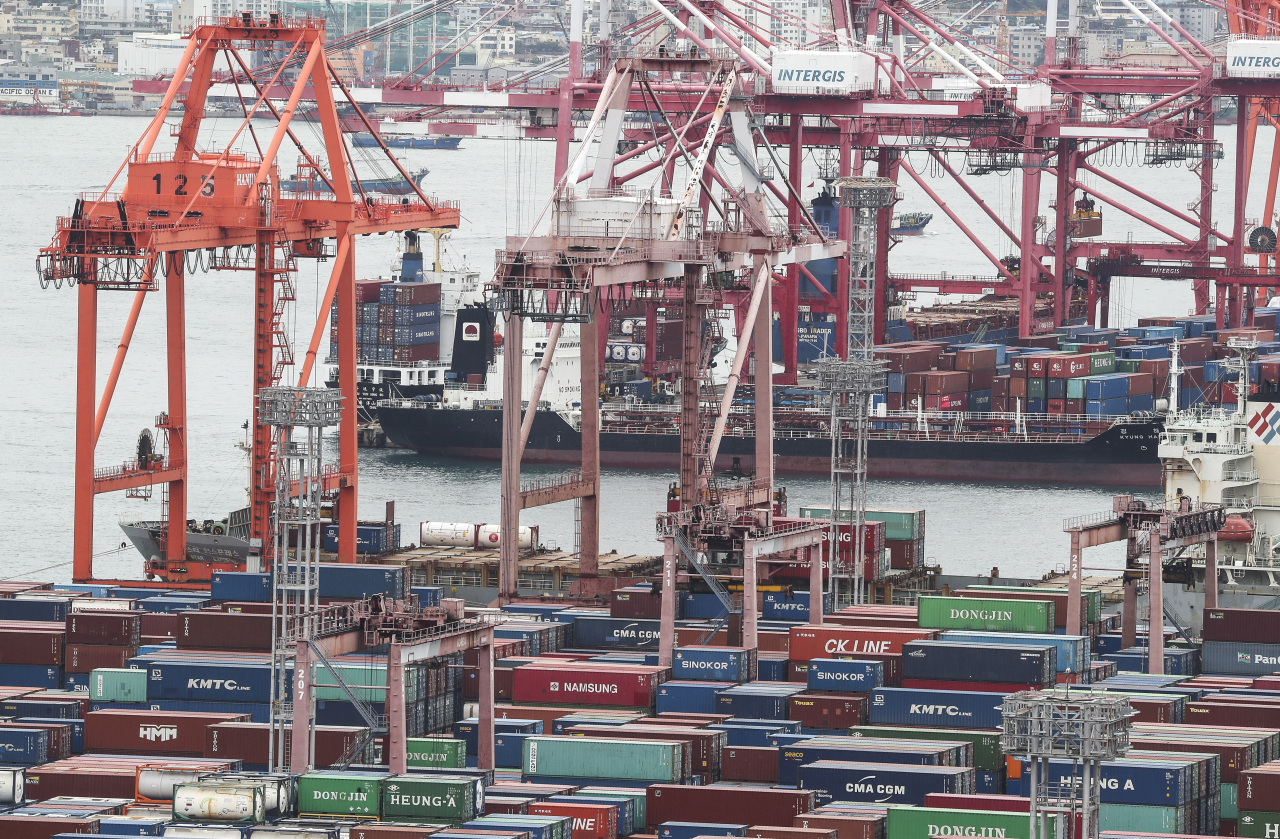 This meant a trade deficit of $9.47 billion, marking the largest since the nation started compiling the relevant data in 1956.

This was the first time in 14 years that the nation suffered a trade deficit for five consecutive months, dating to the period of December 2007 to April 2008.

In August, imports of crude oil surged by 44.7 percent on-year, natural gas by 27.1 percent and coal by 16.8 percent. This was attributed to a spike in international raw material prices, as well as growing demand for energy amid the normalization process from the pandemic.

In addition, imports of semiconductors, a core intermediate item for the nation’s industrial output, increased by 26.1 percent.

In contrast, the nation failed to attain double-digit growth in outbound shipments due to slowed global demand for semiconductors, displays, computers and mobile telecommunications gadgets.

Positive growth was seen in outbound shipments of petroleum products to tune of 113 percent, automobiles by 35.9 percent, rechargeable batteries by 35.7 percent, auto parts by 14.5 percent and steel by 2.8 percent.

By destination, exports to China declined by 5.4 percent, South and Central America by 4.1 percent and the Commonwealth of Independent States -- which includes Kazakhstan, Azerbaijan, Moldova, Belarus and Russia as well as former member Ukraine -- by 10.6 percent.

Shipments to the Association of Southeast Asian Nations increased by 21.7 percent, the US by 13.7 percent, the EU by 7.3 percent, Japan by 2.2 percent, India by 27.1 percent and the Middle East by 7.8 percent.

“Despite unfavorable conditions involving global economic slowdown, our exports posted positive growth for 22 consecutive months. The $56.7 billion in exports marked the largest in comparison of any August,” Industry Minister Lee Chang-yang said in a statement.

But he picked several downside risks for the economy: A decline in international semiconductor prices, a delay in China’s economic recovery and ongoing high energy prices.

Meanwhile, revised Bank of Korea data showed that the Korean economy expanded 0.7 percent in the April-June quarter from the January-March period and 2.9 percent from the same period a year ago, matching the advance estimates released in July.

The latest data comes as the trade-reliant economy fights not only higher prices, but also the rapidly depreciating currency. The won has been hovering around a 13-year low against the US dollar, making imports more expensive for households and manufacturers. It is also offsetting gains in exports with higher energy import bills.

The central bank acknowledged shrinking economic output, having already slashed the growth forecast for the year to 2.6 percent from its previous estimate of 2.7 percent announced in May. But it leaves no room for lowering the projection again, saying the 2.6 percent target remains viable.

“Given that the economy grows 0.1-0.2 percent in the third and fourth quarters, the target is within our grasp,” a senior BOK official said, though he agreed that growth momentum will weaken as exports slow down. Uncertainties involving Russia’s war in Ukraine and a global dash to tighten policy still threaten to derail growth, the official noted.

But Korea should not have to worry about facing stagflation, a coupling of low growth and high prices, according to Bank of Korea Gov. Rhee Chang-young, who has said shrinking growth is not exclusive to Korea.

“I think 2.1 percent growth isn’t that bad, compared to our global peers,” Rhee said, referring to the 2023 growth target. Rhee had revised the growth target twice since the first target of 2.5 percent was announced in February this year.

The priority for now, the top banker said, is a meaningful easing of domestic inflation, which nears an almost 24-year high. Over the weekend, Rhee joined global central bank chiefs at the annual Jackson Hole meeting in Wyoming in pushing for higher borrowing costs. Prices could remain elevated with an annual increase of 5-6 percent until early next year, and higher rates will be backed to rein that in, Rhee said.

As for the weakening won, Rhee was confident that the economy has strong currency reserves to tackle any challenges head-on. The economy is nowhere close to a repeat of the 1990s Asian financial crisis or 2008 global financial crisis, he said. The global rush to secure the dollar, a safe-haven asset, has weakened the won, along with other currencies taking a hit to their value. The government will step in to arrest any decline in the currency if necessary, Rhee added.

The won slipped to yet another fresh 13-year intraday low against the US dollar on Thursday in the onshore market at 1355.1 won, now far past the key threshold of 1,300 won that is considered a red flag for the economy. The won closed at 1,354.9 won -- also a new 13-year low.

Warnings on intervention the government had issued four times this year did little to calm the market. Korea’s foreign exchange reserves, measured in dollars, shrank by $23.4 billion from March to June.