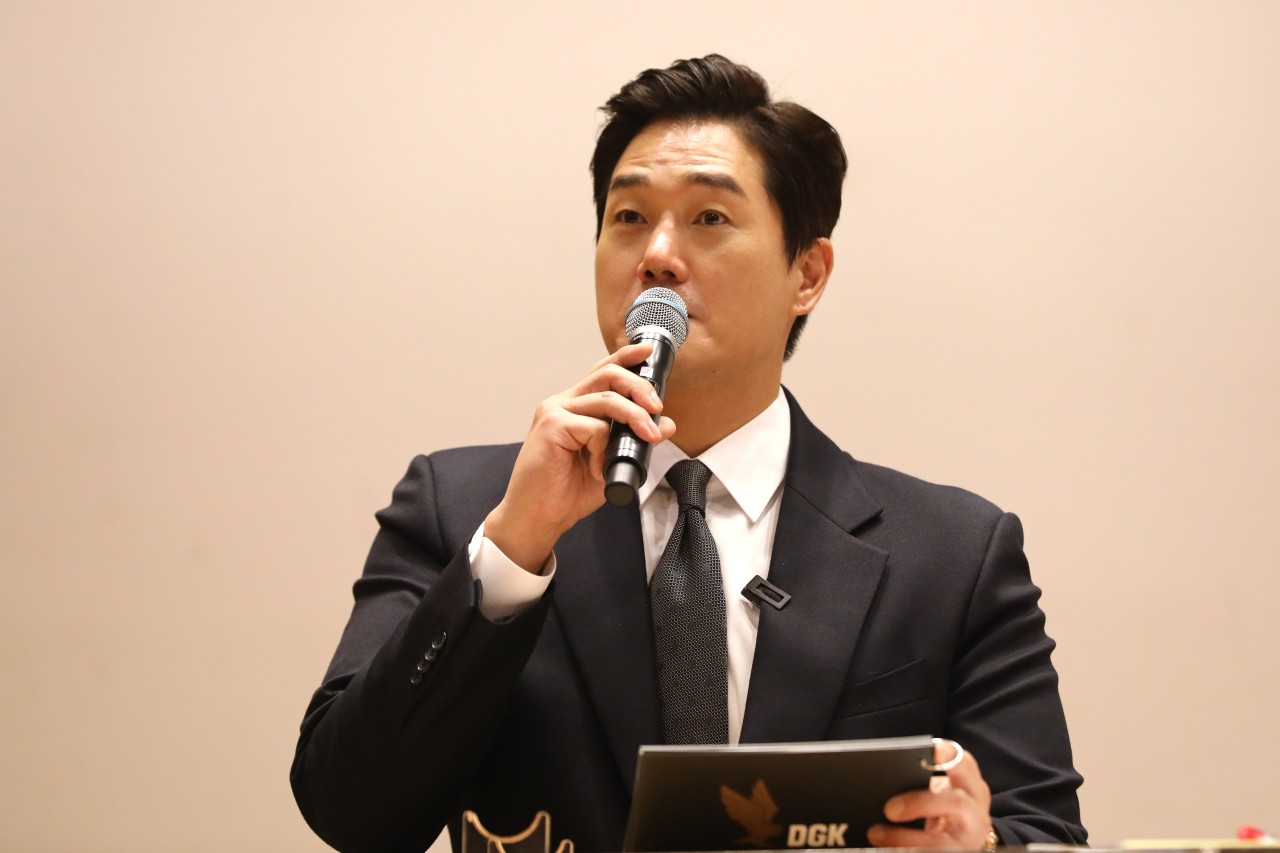 Yoo Ji-tae hosts an event jointly organized by the DGK and Yoo Jung-ju, a lawmaker of the Democratic Party of Korea, at the National Assembly Members' Office Building on Wednesday. (Yonhap)

Members of the Directors Guild of Korea on Wednesday gathered at the National Assembly Members' Office Building to talk about why the current Copyright Act should be revised for fair remuneration of filmmakers’ work and Korean movies' further global success.

The event was jointly hosted by the DGK and Yoo Jung-ju, a lawmaker of the Democratic Party of Korea.

At the beginning of the meeting, director Park Chan-wook, who is currently in Los Angeles, joined via videoconference to show his support for a revision to the Copyright Act.

“I hope that the revised copyright bill can be passed as soon as possible,” Park said. “Only then, domestic creators will be able to work in a world-class environment. I will support the bill until the end.”

“I proposed the revised bill with 38 lawmakers -- that is not a small number. We are holding this meeting to support the bill's passage,” Yoo said.

Lawyer Kim Jung-hyun then explained that the current law stipulates that the rights to cinematographic works “shall be presumed to have been transferred to the producer of the cinematographic work unless otherwise expressly stipulated” and does not include any rights for the creators to share in the return. 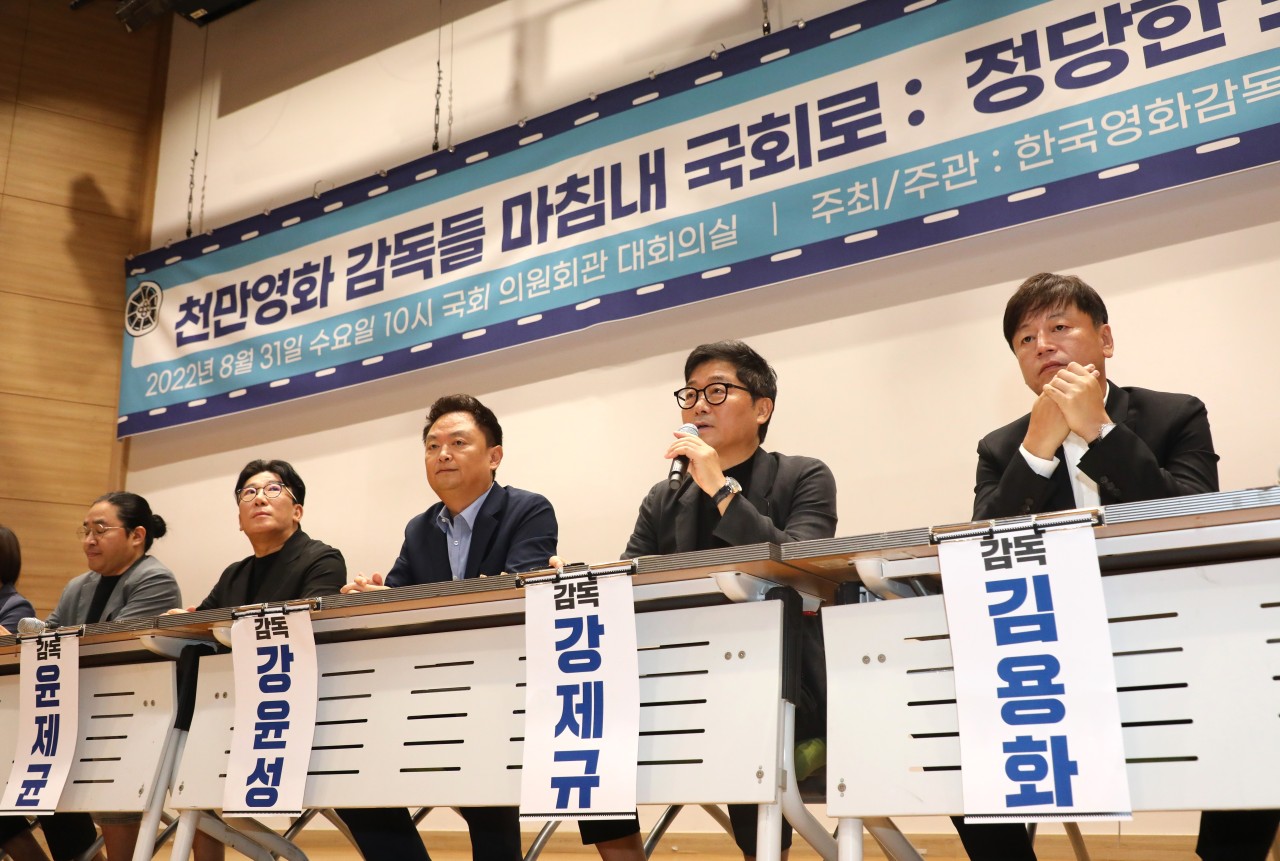 From left: Directors Kim Han-min, Yoon Je-kyoon, Kang Yoon-sung, Kang Je-kyu and Kim Yong-hwa take part in an event hosted by the DGK and Yoo Jung-ju, a lawmaker of the Democratic Party of Korea, at the National Assembly Members' Office Building on Wednesday. (Yonhap)
The session was hosted by director and actor Yoo Ji-tae and many directors, writers and lawmakers, including Park Hong-keun, Hong Ik-pyo and Do Jong-hwan, who joined the event in the audience.

“This law reminded me of the time when I finished making my first and second film, which were not successful. I was working on ‘War of the Arrows.’ At the time, my previous films were aired on cable channels and I remember thinking 'who earns money from that?' I desperately needed some money so I thought it would be nice if I could benefit from it,” Kim Han-min said.

Kim added that all the rookie directors present were not in great financial situations and a little support from the revised bill could offer meaningful help for them.

“DGK conducted a survey of 500 directors and found that they earn less than 10 million won ($7,450) a year on average. Some directors earn a lot of money but many more suffer. I hope that the revised bill can help them out,” Yoon said.

“Filmmakers spend one to two years -- for some around 10 years -- to develop and write a script. And then when we get to sign a contract that says we will hand over all the future royalty with productions. It is like all the hard work that I have put in is all sold at once with a down payment,” Kang Yoon-sung said. “What content in the world is sold like this?”

“Last year, DGK called me and said there is a royalty payment that I have to receive. I met with them and they explained to me that a broadcaster in France aired my movie and it is the payment for that. It was the first time in my whole career that I received money like that,” Kang Je-kyu said. “I envied creators in France and other parts of Europe who work in such an environment.”

“I was lucky. Songs in two of my hit movies -- ‘200 Pounds Beauty’ and 'Take Off' -- were also a big hit. My friend who was the music director of both films said the Korea Music Copyright Association fought for their right and as a result, he got royalty payments every time the movie is aired or someone sings the song at a karaoke,” Kim Yong-hwa said.

He added that it was not his friend whom he envied but the fact that he had an association that was backing him up.

“I wonder whether the Korean Film Council is using the movie development fund for filmmakers,” he added.

The fund he referred to is paid into by movie theaters. Under current law, they are required to contribute 3 percent of ticket sales to KOFIC to support local movie development.

Actor Yoo Ji-tae concluded the talk by saying simply that "creating a sustainable environment for filmmakers is important."

"I hope that we can create an environment where directors and writers do not have to do the part-time job of delivery or driving,” he added.