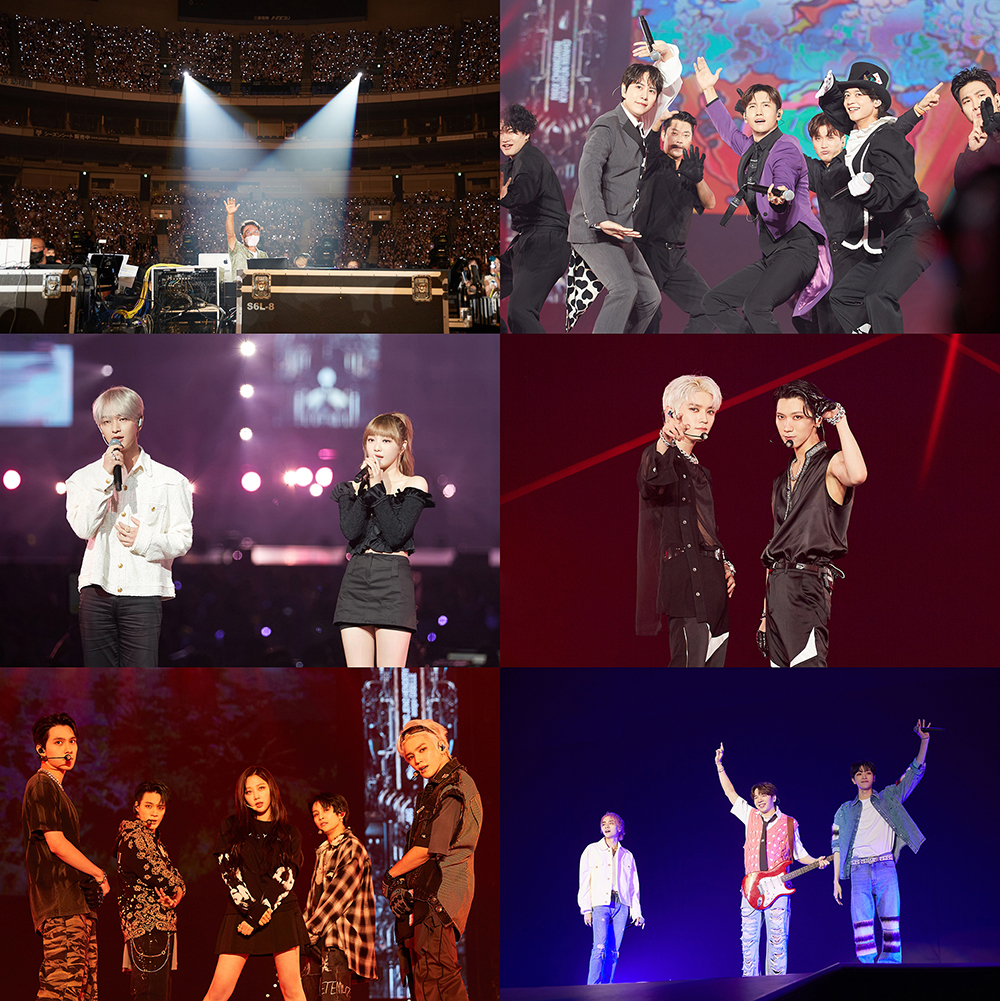 (SM Entertainment)
TOKYO -- Under the starry, lofty dome of Japan’s largest concert venue, it was made crystal clear during a concert that ran over four hours with a whopping 41-song setlist: SM Entertainment, one of Korea’s largest entertainment agencies, has not only successfully recaptured the spirit of its early heydays, but also embodied the pinnacle of collective power made possible by bringing together various music genres.

The label’s joint label concert, dubbed "SMTown Live 2022 : SMCU Express @Tokyo" took place at Tokyo Dome in Japan from Aug. 27-29, gloriously returning to the Japanese capital city in three years since the pandemic nixed any global tours. The three-day sold-out event attracted about 150,000 in-person fans in Tokyo, with the Sunday show being livestreamed via the video streaming platform Beyond Live for distant global fans. The concert series initially kicked off in Korea a week prior to the Japanese leg.

As the clock ticked toward 4 p.m. on Sunday, the nervous excitement that had filled the spacious 55,000-seat stadium exploded into the ear-splitting roars of clappers that were given to concertgoers so they could emulate a noisy, screaming crowd. Living up to the hype, the frenzied DJ gigs from Ginjo, Raiden and Hyo (also known as Girls’ Generation's Hyo-yeon) signaled the opening of the night. The concert then smoothly transitioned into the burgeoning “Black Mamba” and “Next Level,” two high-energy hits from aespa. WayV and NCT Dream upped the ante with “Kick Back,” “Beatbox,” and “Hot Sauce.” 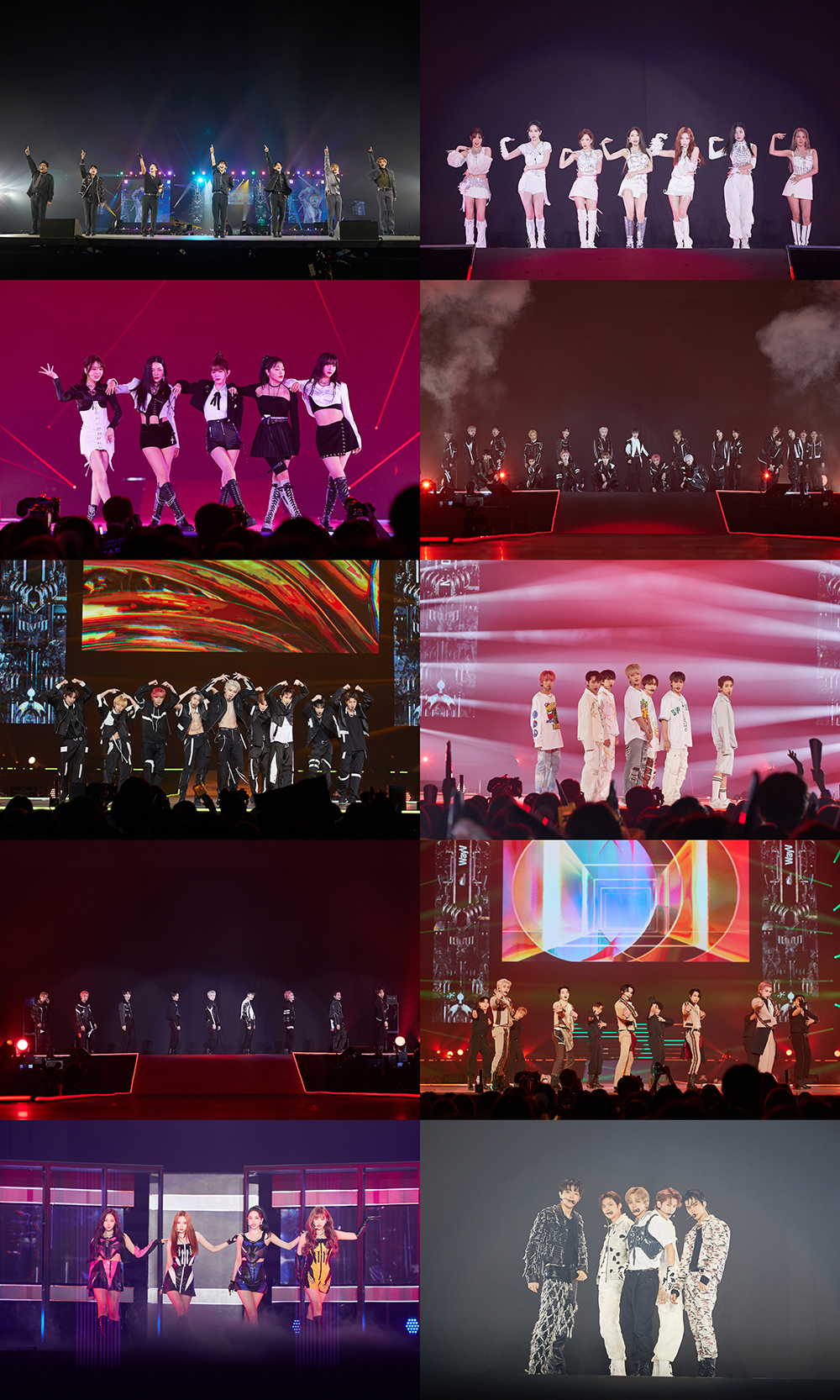 (SM Entertainment)
The colors and patterns of light sticks waved by fans differed from each other, but together they flashed a beautiful sea of hues, illuminating the dimmed venue. On a side note, one thing I’ve newly noticed from my very first concert experience in Japan was that barely any concertgoers had mobile phones in their hands, due to the strict restriction against taking photos inside the stadium and the “No photo” and “No video” signs posted everywhere. Without any digital devices, however, the fans seemed to relish every moment to the fullest, showing their support through relentless clapping.

Ever since its start in 2008 in Seoul, SM’s joint concert that brings every artist under the label together onstage has gone through a constant change of lineups during pivotal years in the K-pop industry. But through ups and downs, its legacy seemed to have grown only stronger. From the company’s veterans such as BoA, Super Junior, EXO, Red Velvet, SHINee and NCT 127 to rising labelmates aespa and newly formed Got the Beat, watching the entire SM family performing on the same stage was like reliving the legendary history of SM. It’s one that has set several milestones in this ever-changing industry. Also, it was pleasant to see the musicians successfully leading the entire show at a great pace, seamlessly switching between performances and talking sessions with local fans in Japanese without a hitch. In between the gigs, some acts like EXO hinted at possible comeback plans.

(SM Entertainment)
As the sun sank, the show began to pick up even more steam with a string of solo and special performances dedicated to local fans. Chen of EXO and Onew of SHINee crooned to soulful ballads “Beautiful Goodbye” and “Way,” respectively, while acts like Max Changmin, Taeyeon, Hyoyeon, Minho and Suho performed their solo hits “Devil,” “INVU,” “Deep.” “Heartbreak” and “Hurdle.” Kangta and Key of SHINee showcased their newest songs “Eyes On You’ and “Gasoline,” respectively, treating fans with a special sonic gift. For Japanese fans, the show also featured some Japanese songs, such as “The Greatest” by BoA, “Shake” by Xiumin, as well as renditions of local hits such as One Ok Rock’s "C.h.a.o.s.m.y.t.h” performed by Yesung of Super Junior and the joint performance of Ado's "Ashura-chan" by Changmin, Kyuhyun and Minho. It was undeniable: SM was still a key player, and a home to some of the biggest and most cutting-edge musicians in the scene.

Super Junior was arguably the highlight of the night. The seasoned band knew how to spice up the night, with members galloping around the stage and breaking down the language barrier by drawing out laughter from the audience. Backed by colorful confetti and firework embroidering the night, the bandmates performed “Sorry Sorry,” the all-time nostalgic hit that never got old. The band’s performance was followed by NCT Dream’s “Glitch Mode,” aespa’s “Girls.” Red Velvet’s “Feel My Rhythm’ and BoA’s “Better.” The event came to a grand finale with a performance of Super Junior’s festive “Black Suit,” and finally with “Hope from Kwangya,” a remake of boy band H.O.T.’s 1998 song, during which all the musicians gathered up onstage to sing the hopeful song in unison and say farewell to their beloved fans. SM's founder and executive producer Lee Soo-man also joined the final performance, showing his support for the musicians. It was a perfect, heart-warming way to end the memorable night. Heading out of the dome, the melodious tune of “Kwangya” kept thumping in my ears. I could feel that “pink blood,” a phrase that identifies a supporter of SM, was already running through my veins.