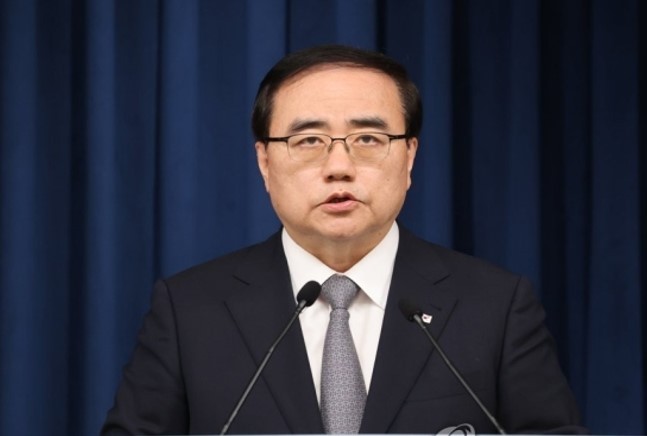 South Korea’s national security adviser Kim Sung-han will meet with his US and Japanese counterparts in a two-day meeting in Hawaii to discuss North Korea, economic security and major regional issues, the presidential office said Wednesday.

The three will have “in-depth discussions on North Korea, (South) Korea-US-Japan cooperation, economic security and major regional and international issues,” the office said.

The trilateral talks constitute the first meeting of the chief security officers among the three nations since President Yoon Suk-yeol took office. It is also the first since Yoon announced his “audacious initiative” that aims for North Korea’s denuclearization.

Earlier this month, the Yoon administration promised economic support if the North gives up its nuclear weapons, but the North officially refused the proposal.

Kim is expected to explain to the US and Japan in detail the background and plan of the initiative. In the process, the three countries are expected to share their assessment of the situation with North Korea and exchange views on ways to deter the possibility of North Korea’s provocations and to advance the denuclearization issue.

Earlier, the US showed its support for the audacious initiative, urging North Korea to respond positively.

US Department of State spokesperson Ned Price said in a daily press briefing last week, “It’s a plan that’s entirely consistent with our approach to the DPRK’s nuclear weapons program, to its ballistic missile program in that it sees the potential for practical, incremental advancements towards the complete denuclearization of the Korean Peninsula.”

DPRK refers to the North’s formal name, the Democratic People’s Republic of Korea.

During the talks, the three are also expected to discuss China’s provocations in East Asia, which have been intensifying since US House Speaker Nancy Pelosi’s visit to Taiwan in August.

Tensions between the US and China have been rising after China conducted military exercises to surround Taiwan after the Pelosi visit. In response, the US sent two warships through the Taiwan Strait.

After the trilateral meeting, Sullivan will visit the US Indo-Pacific Command to discuss its alliances in defense of a free and open Indo-Pacific, the White House said.

At the talks, the economic and security cooperation issue is also expected to be discussed.

The Korean government is expected to raise concerns over US discrimination against Korean companies via the recently passed Inflation Reduction Act and the Chips and Science Act, at a time when Seoul and Washington are expanding their economic alliance.

On Aug. 16, President Joe Biden signed the Inflation Reduction Act into law. Under the act, only electric vehicles that are finally assembled in North America can receive subsidies, which means vehicles from Korean companies would not benefit. As a severe blow to Korean companies’ competitiveness in electric vehicle sales seemed inevitable, a joint government delegation consisting of officials from relevant ministries left the country urgently for consultations with the US administration and others on Monday.