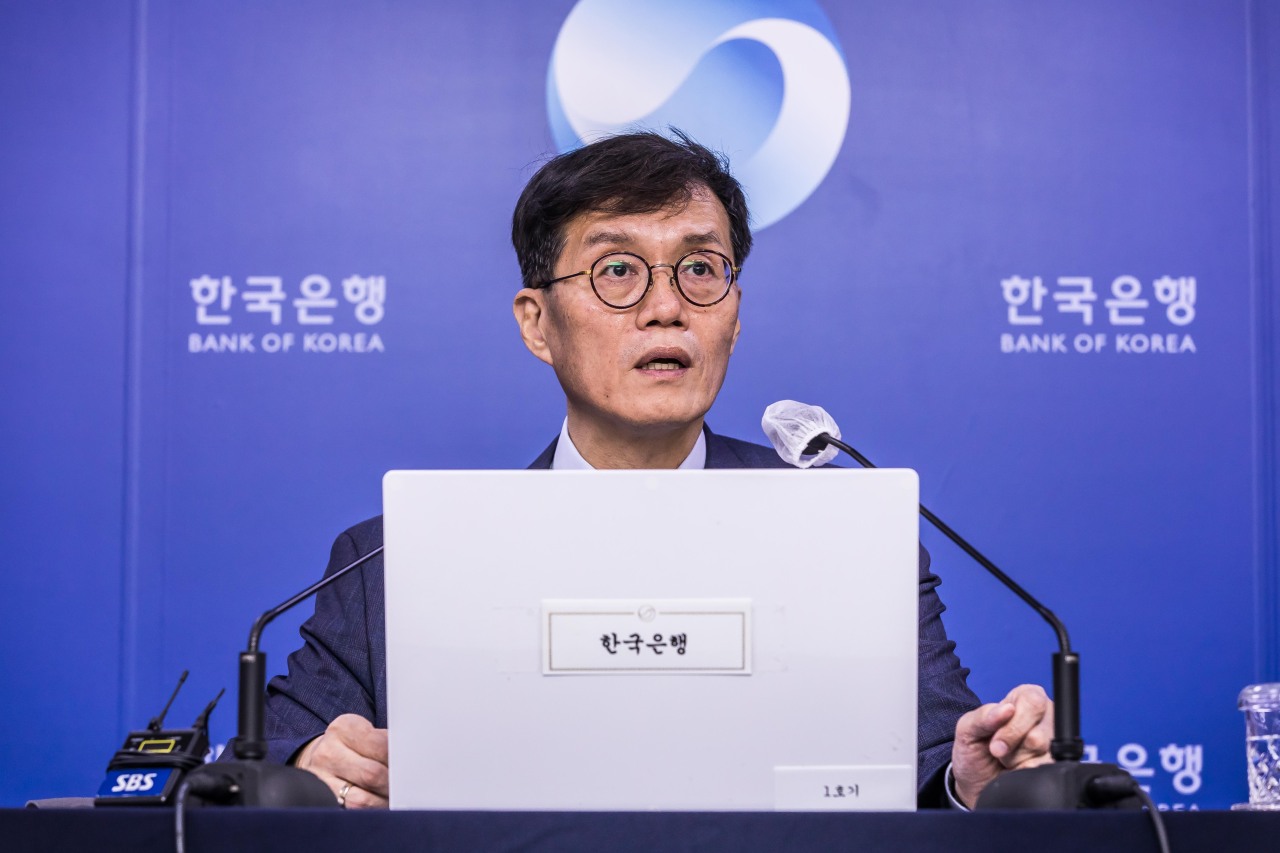 Bank of Korea Gov. Rhee Chang-yong speaks during a press briefing about its rate decision at the bank headquarters in Seoul on Thursday. (Yonhap)
The Bank of Korea said Tuesday that it is not expecting a shift in its interest rate policy despite a hawkish US stance on inflation Federal Reserve Chairman Jerome Powell revealed over the weekend, as that was already factored in its decision-making process.

At a three-day global symposium of central bankers that ended Saturday in Jackson Hole, Wyoming, Powell made it clear he backs rate hikes as needed to tame inflation even if that means slowing growth – a message some say could push the BOK to tighten policy more than what it has said it will.

“Well, his speech isn’t that different from what we expected when we made our rate decision. I don’t see much of change in our policy going forward,” BOK Gov. Rhee Chang-yong said in a statement, referring to a rate hike on Thursday. That day, the bank approved the usual 25 basis point increase, with Rhee saying that would be the norm “for the time being,” meaning the next three months.

The rate decision last week, which was half the historic size seen in July, marks the first time for the bank to support a rate hike for a fourth time in a row as the bank mulls another raise of 25 basis points in its October and November meetings to corral inflation. The policy rate now stands at 2.5 percent, inching closer to 3 percent expected by year-end.

That estimate, if realized, will leave the Korean rate trailing far behind a potential range of 3.75-4 percent the Fed could endorse after three more meetings ending in December, worrying policymakers in Seoul over capital outflow fleeing for better yields from the dollar.

In the statement Tuesday, Rhee warned again against such volatility prompted by the aggressive Fed rate hike campaign, saying the US central bank could lean on another large increase of either 50 or 75 basis points at its Sept. 20-21 meeting.

But the BOK could weather a gap as big as a full percentage point between the Korean and the US interest rates, according to Rhee, who said he would closely monitor local markets as the gap expands. Authorities stand ready to intervene in currency markets to rein in any speculative moves involving the won-dollar trade, Rhee says. A day earlier, the local currency weakened to 1,350.4 won per US dollar, a new 13-year low.

The growing market turmoil is one of the latest signs forcing the Korean government to put together a more calibrated response to what it calls a full-blown crisis. The export-led economy fights not only higher prices but also the rapidly depreciating won, which has wiped out gains in exports. Korea is on track for a five-month streak of monthly trade deficits dating to April.

Last week, the BOK lowered the 2022 growth forecast to 2.6 percent, down from the 2.7 percent announced in May. Economic output is set to shrink further to 2.1 percent for 2023. Rhee says borrowing costs will be raised until prices are brought down.