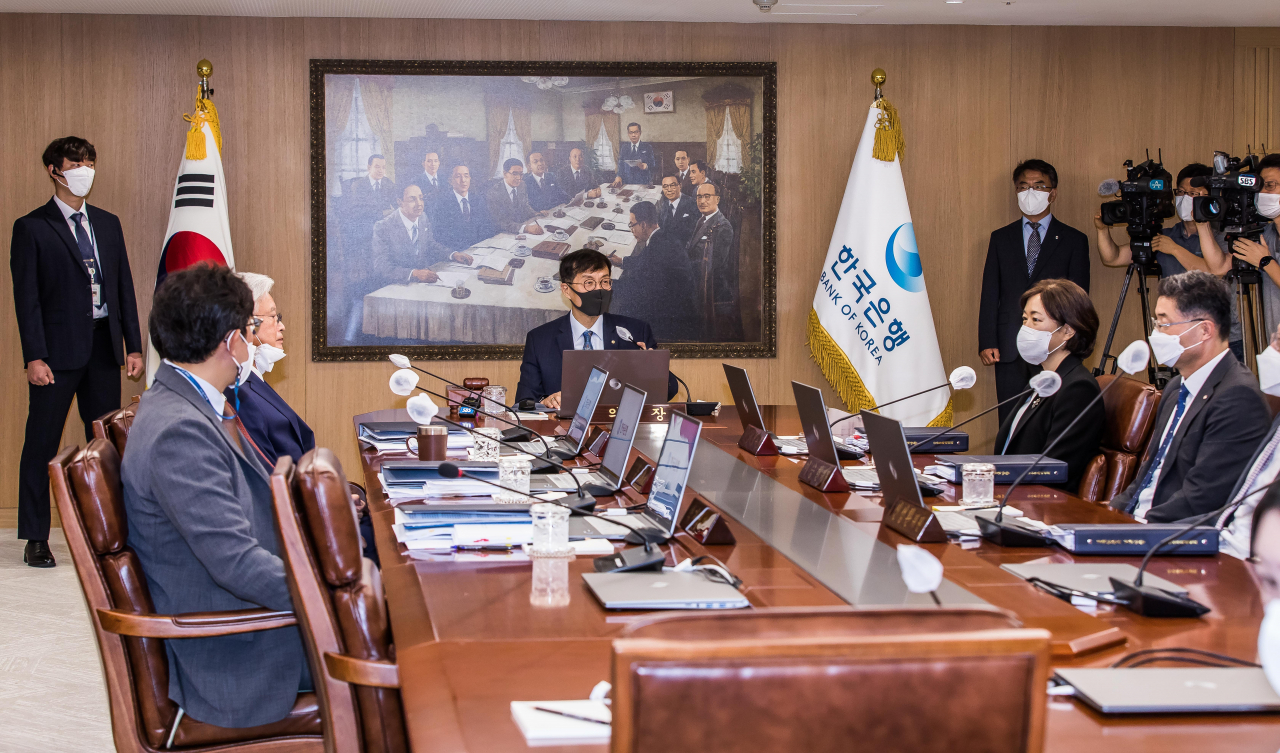 Bank of Korea Gov. Rhee Chang-yong (C) presides over a Monetary Policy Committee meeting at the central bank in Seoul on Thursday. The central bank raised its key rate by a quarter percentage point to 2.5 percent to suppress inflation expected to hit the highest level in more than two decades this year. (Yonhap)

The Bank of Korea (BOK) will not change its current monetary policy of pushing for "piecemeal" rate increases to combat inflation despite US Fed Chair Jerome Powell's hawkish remarks at the recent Jackson Hole meeting, its top official said Tuesday.

At the annual conference held over the weekend in Wyoming, Powell hinted at continuing the Federal Reserve's rate hikes for some time to rein in runaway inflation, a comment interpreted in the market as raising the possibility of a large-scale rate increase in September, following two straight 0.75 percentage point rises in June and July.

His remarks stoked worries over the Fed's longer-than-expected aggressive rate increases. South Korea's financial markets tumbled on Monday with the benchmark KOSPI falling over 2 percent and the local currency diving to the lowest level in more than 13 years.

"Chair Powell's remarks can be summed up as he will continue to push for 50-75 basis points of a policy rate increase at the FOMC meeting set for Sept. 20-21 and keep rate hikes until inflation is surely stabilized within a target range," BOK Gov. Rhee Chang-yong was quoted as saying by his office.

"Since they are not much different from what the BOK expected in August when it determined its policy rate, its future monetary policy direction disclosed at that time remains unchanged," he added.

Having attended the symposium himself, Rhee still underlined the importance of closely monitoring the Fed's monetary policy path, saying that global financial and currency markets can go through sharp fluctuations whenever the US central bank makes a rate decision.

Last week, the BOK raised its policy rate by 0.25 percentage point to 2.5 percent in the latest move to fight fast-rising inflation amid high energy and commodity prices.

The move represented its seventh increase in borrowing costs -- 2 percentage points combined -- since it delivered its first rate hike in 15 months in August last year to roll back its pandemic-era easing of its monetary policy stance.

It also came after the central bank raised the benchmark rate in the previous three meetings, the first such case ever. In July, the BOK delivered its first-ever "big-step" rate hike of 50 basis points.

In a press meeting following the rate hike decision, Rhee said that the BOK will continue to push for "piecemeal" rate hikes, referring to quarter point increases, rather than seeking another big step.

The top central banker added that the current market consensus of the BOK raising the interest rate to 2.75-3 percent by year's end is "reasonable," hinting one or two more rate hikes could be possible in the months to come.

He, however, declined to elaborate on how the rate will move next year, saying uncertainty is very high in predicting what will take place. (Yonhap)