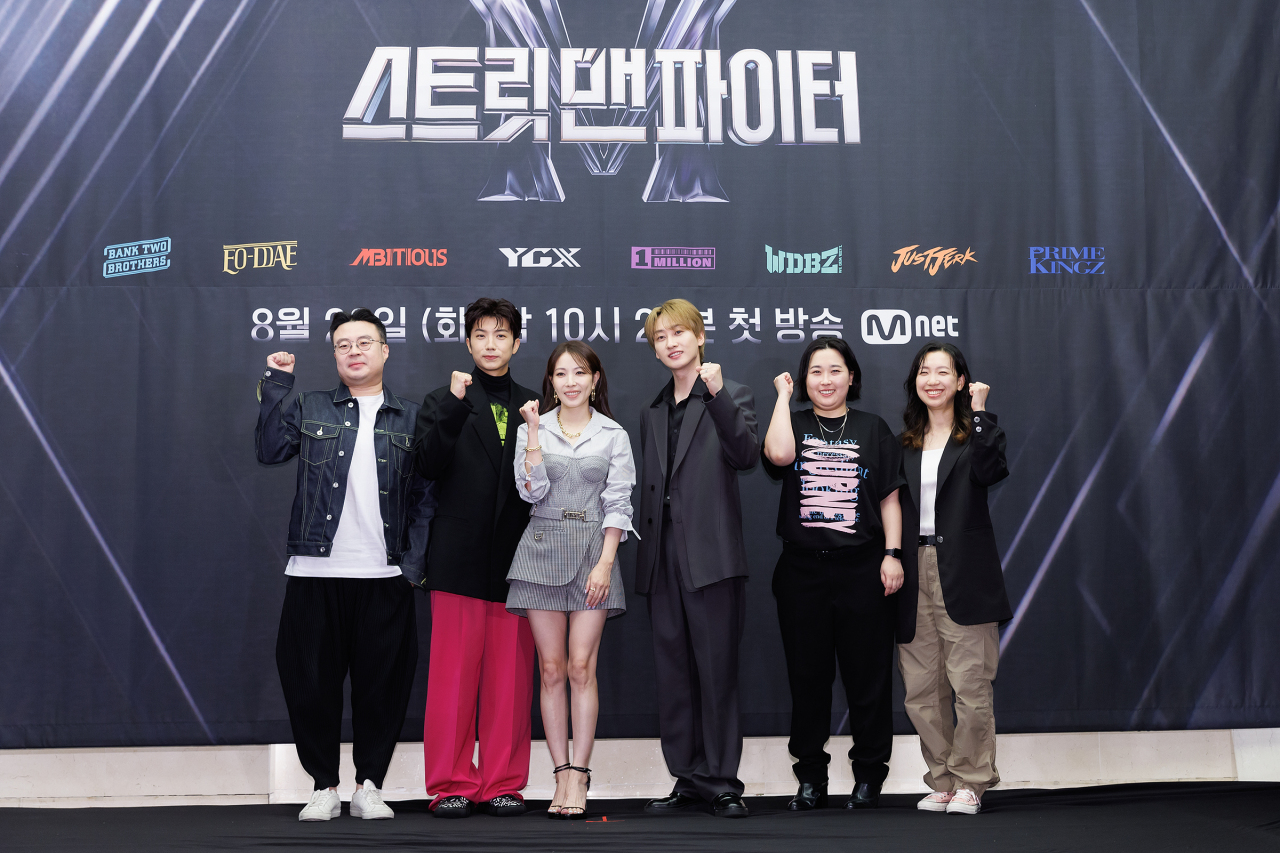 Dubbed “Street Man Fighter,” the program will feature eight top-tier dance crews spanning a wide-range of dance genres such as hip-hop, krump and choreography. The teams will pit against one another through missions and battles to win the title of “Street Dance King.”

“To return the love we’ve received from ‘Street Woman Fighter,’ we were originally planning on returning with season two of the program. But we decided to air ‘Street Man Fighter’ first as we wanted to show different charms of male dancers to the audience,” Kwon Young-chan, chief producer of the program, said during a press conference event held in Sangam-dong, Mapo-gu, Seoul, Tuesday.

Choi Jung-nam, co-producer of the show, also highlighted her aim to produce a survival show that features talented male dancers with the world title. “I think now is the time to introduce the program. Viewers will enjoy watching the dancers’ more powerful dance moves and crews’ strong bond and friendship,” she said.

During an interview with a group of local reporters in May, the producers behind the cable channel’s dance program series talked about their goal of showing “K-dance” on the world stage as the program becomes a springboard for dancers’ global expansion.

As part of the efforts, the cable channel is planning a world tour, as well as releasing special songs dedicated to the crews. Four new songs, in which AKMU’s Chanhyuk, Winner’s Kang Seung-yoon, Kang Daniel and TO1 took part in, are set to be released at 6 p.m. Tuesday via online streaming sites.

“There was a craze for ‘Hey Mama’ last year. We’ve prepared new songs for dancers’ missions during the show. The songs are background music for dancing, and I hope viewers take more interest in music as they enjoy the competitions,” Kim Na-yeon, co-producer of the show said. “My personal goal is to create a global fandom for ‘K-dancers.’” 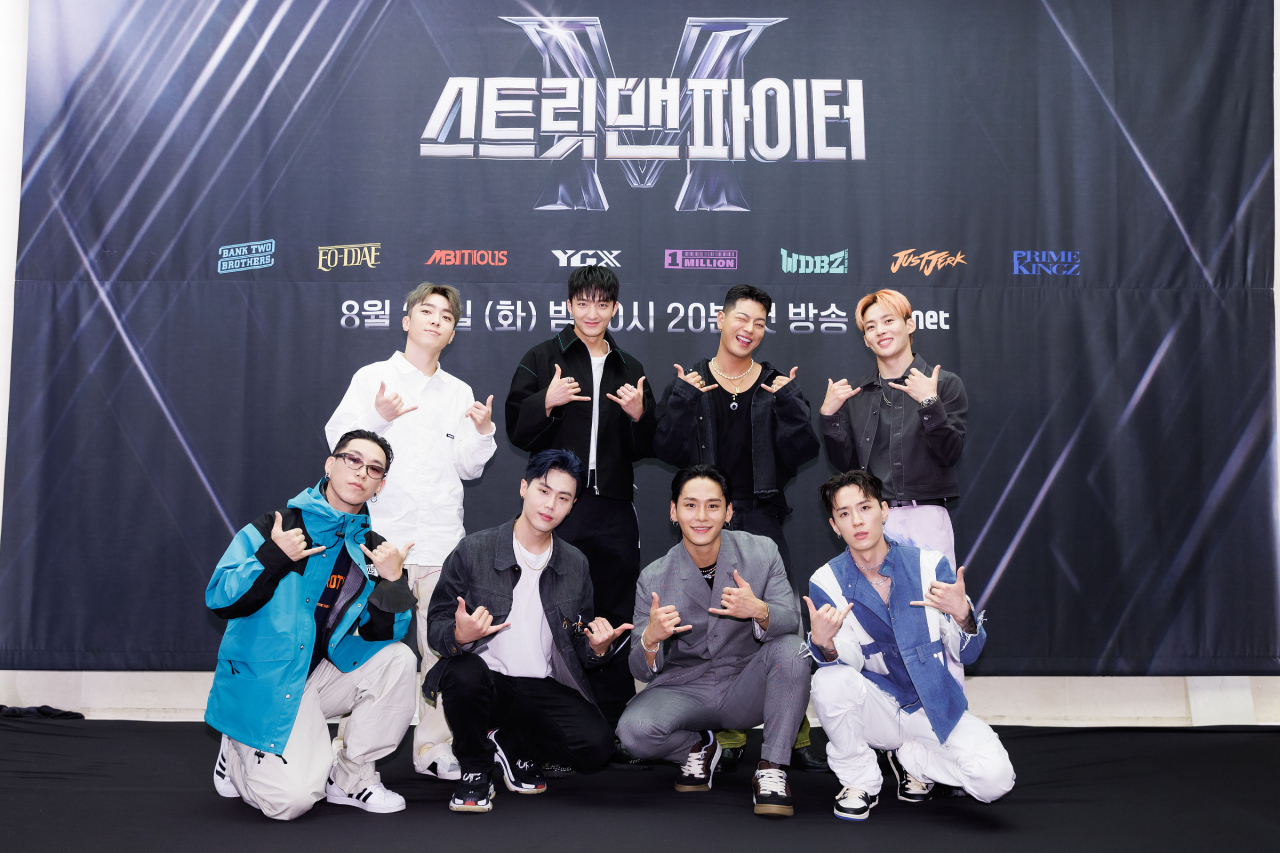 Leaders of eight dance crews -- Bank Two Brothers, Eo-Ddae, project dance crew Mbitious, YGX, 1Million, We Dem Boyz, Just Jerk and Prime Kingz -- pose for photos during a press conference for Mnet’s upcoming dance competition show “Street Man Fighter” held in Seoul on Tuesday. (Mnet)
K-pop diva BoA, who appeared on “Street Woman Fighter” as one of the judges, will feature as the show’s judge once again along with Super Junior’s Eunhyuk and 2PM’s Wooyoung. Singer Kang Daniel, who hosted “Street Woman Fighter,” will reprise his role as the host of the survival program.

Kang could not make it in person to Tuesday’s event, as he had tested positive for COVID-19, but the three other judges were at the media conference. They expressed their pleasure at being a part of the program.

“I got to join (the ‘Street Fighter’ series) as a judge of ‘Street Man Fighter’ this time. It’s a great honor to appear on the show with good intentions. I believe viewers will also feel great joy by watching great dance performances and powerful energy,” BoA said, while describing the fierce competition among the male crews are like “walking on thin ice.”

Eunhyuk also showed his gratitude for being part of the program. “As a dancer and a person who has loved dancing, I felt great about seeing the influence of ‘Street Woman Fighter’ on the audience last year. Please keep giving much attention and love to the Korean dancers this time as well,” the artist said.

“I was looking for the moment I could join the show. I was a big fan of ‘Street Woman Fighter’ and wished I could take part in it, too. I was so jealous of the show host Kang Daniel,” Wooyoung said. “I work hard to judge fairly when the crews get to battle against each other. Rather than the style of dancing they get to show, my evaluation is based on their earnest attitudes on the ground.”

Leaders of the dance crews also participated in the event and showed their ambition for winning the championship. Mbitious’ leader Ocheon introduced his crew as a “group of experts who survived from a cutthroat competition ratio of 490:1.” Just Jerk’s leader Young-J also said, “We’ve been a well-recognized crew. We’d like to show that our skills remain undiminished.”