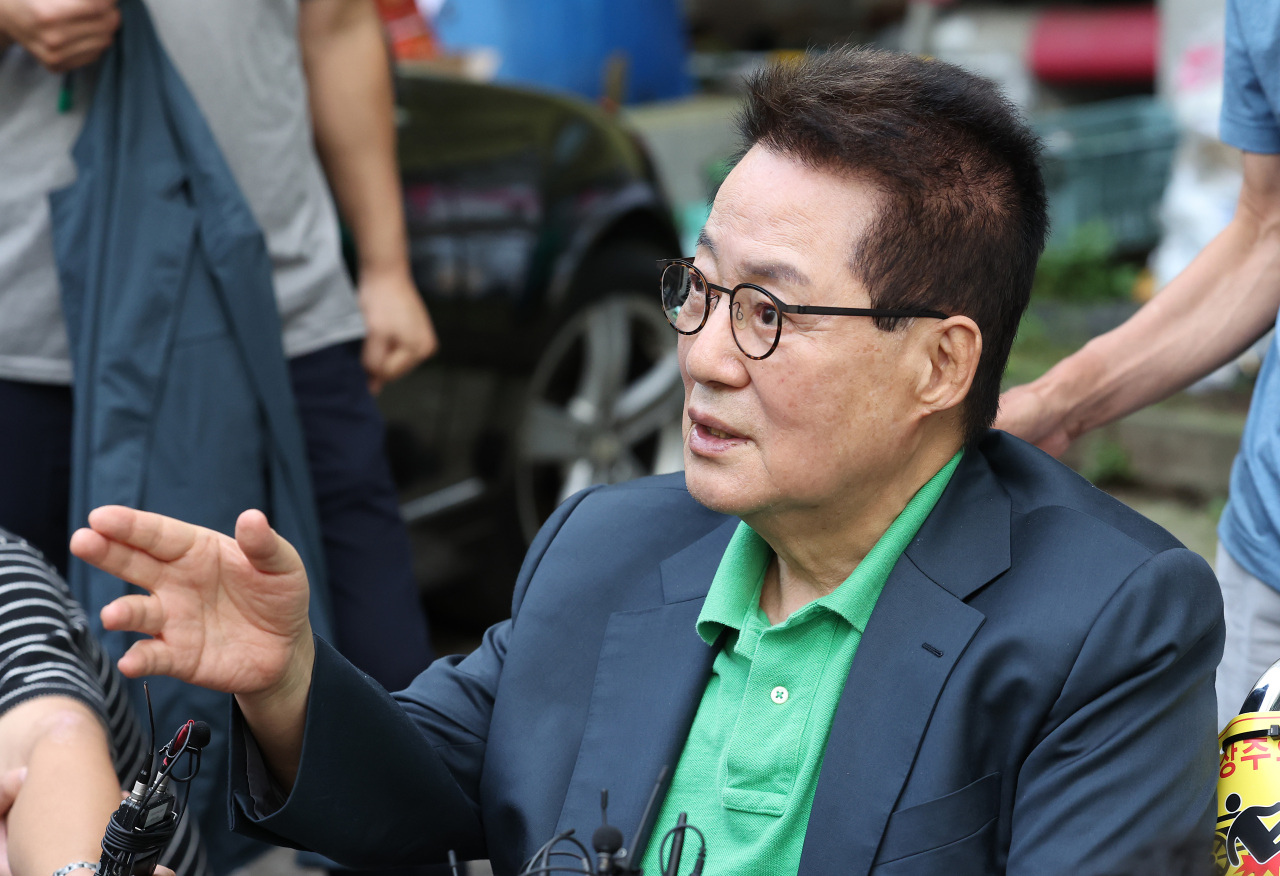 Former National Intelligence Service chief Park Jie-won speaks to the press after the prosecutors’ search and seizure of his home in Seoul on Tuesday. (Yonhap)
South Korean prosecutors searched the houses of Park Jie-won, Suh Hoon and Suh Wook in an investigation into allegations surrounding the death of a South Korean civil servant.

At the time, authorities concluded that Lee had attempted to defect to North Korea, having accumulated a significant gambling debt.

The Coast Guard has since overturned the conclusion, saying that there was insufficient evidence.

As the then-NIS chief, Park is accused of unauthorized deletion of intelligence-related reports regarding the case. An NIS employee wrote an internal report stating that Lee was likely to have drifted, but Park ordered them to delete the report, according to the NIS’ own investigation.

The prosecution speculates that the report was deleted in order to conclude the case as “a voluntary defection.”

Former national security adviser Suh Hoon, who headed the NIS before Park, allegedly ordered the Defense Ministry and other concerned organizations to support the conclusion.

Suh Wook’s statement at the National Assembly’s National Defense Committee meeting on Sept. 24, 2020, also raised suspicion. He said he had given orders to “look carefully at the possibility of defection to North Korea” after he first received the report about the incident.

The prosecution is also reportedly considering the possibility that the presidential office and government officials at the time intentionally focused on “voluntary defection” to cover up the case.

Prosecutors are expected to summon all three officials as soon as they finish analyzing the confiscated materials.

Right after the raid, Park appeared on YTN News and criticized the investigators, saying the investigation was incomprehensible because it is “based on political standards.”

In addition to the homes of the former government officials, the prosecution carried out searches at more than 10 locations simultaneously, including at a unit tasked with gathering intelligence on North Korea under the Defense Ministry and the Korea Coast Guard office. It is the second search and seizure related to the case since investigators raided the NIS headquarters on July 13.

The case regarding the civil servant’s death is one of two North Korea related scandals that the Yoon Suk-yeol government said the former administration has mishandled. An investigation into the other case -- the repatriation of two North Korean fishermen in 2019 -- is ongoing.