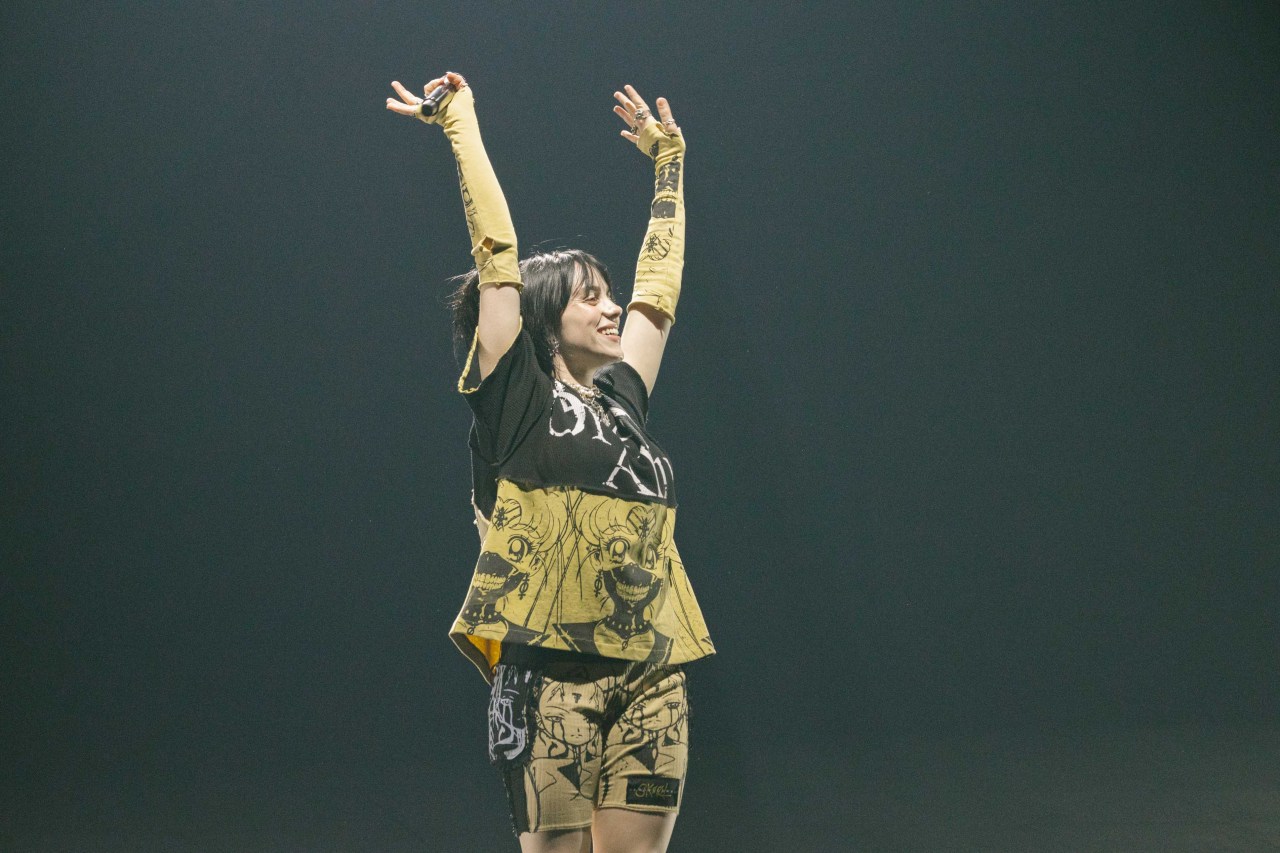 “Hyundai Card Super Concert 26 Billie Eilish,” the singer-songwriter’s second concert in the country, took place at Gocheok Sky Dome. She held her first show on the same day, Aug. 15, 2018, at the 2,000-seat Yes24 Live Hall in eastern Seoul. Her audience here has expanded by 10 times, and the “little giant” paid back the love with a jam-packed 90-minute-long event. BTS’ RM and J-Hope, and model and actor Jung Ho-yeon, who rose to stardom in the hit Netflix series “Squid Game,” were among the spectators.

The concert was initially set to start at 8 p.m. but was delayed due to long lines at the entrance owing to rain. As the clock struck 8:17 p.m., Eilish, decked out in an oversized black shirt with the words “Dead or Alive” printed on it, appeared on the stage. Fans’ excited screams greeted the artist, and the singer kicked off the event with “Bury a Friend.”

She greeted fans by shouting “Seoul!” The musician continued, “Come on, stand up, everyone. … Let‘s dance. I want you to move and jump like me,” to hype up the audience. Eilish performed a total of 23 songs, including “I Didn’t Change My Number,” “NDA,” “My Strange Addiction,” “IDWBYA” and “Billie Bossa Nova.” 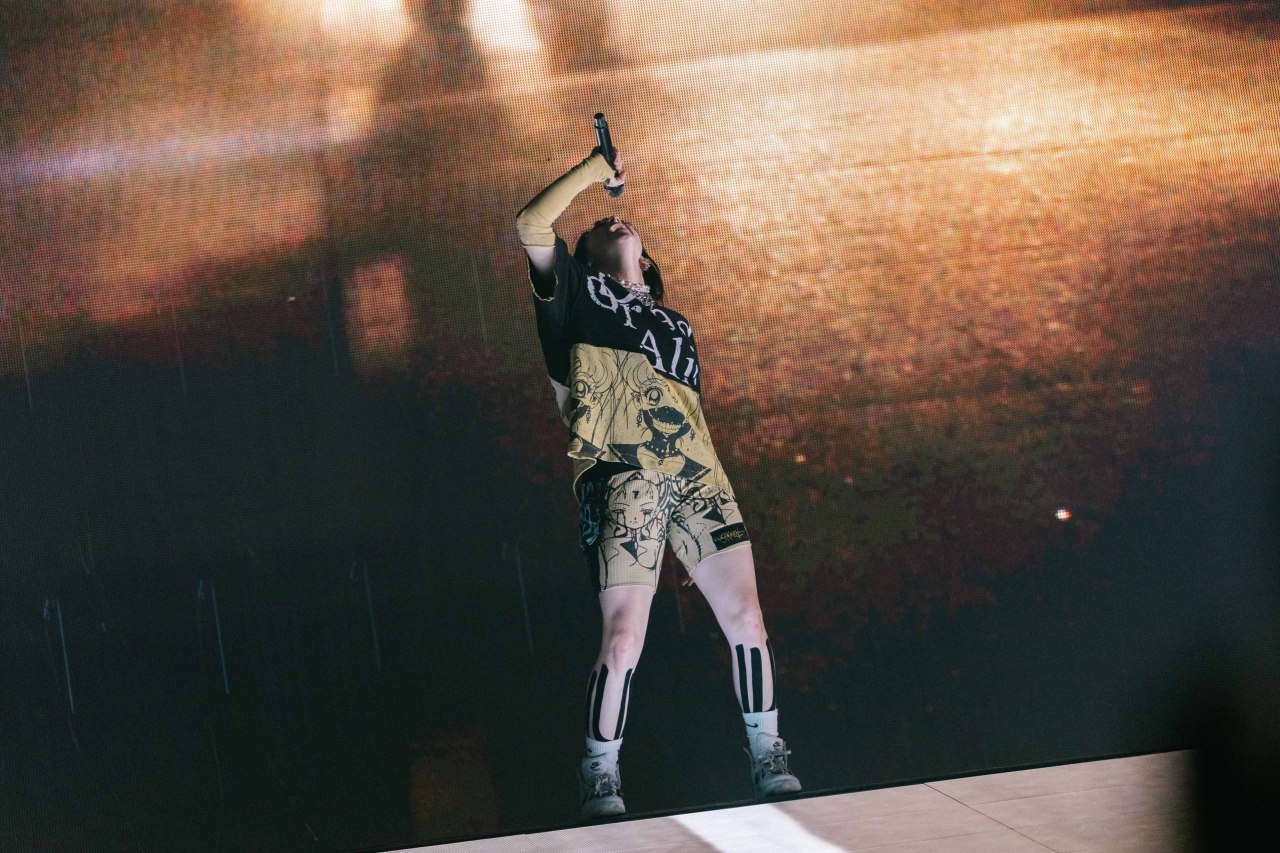 American pop star Billie Eilish performs during her second concert in Korea, “Hyundai Card Super Concert 26 Billie Eilish,” held at Gocheok Sky Dome in western Seoul on Monday. (Hyundai Card)
“It is so good to see you again. This is a very large room, so amazing. Thank you guys,” she said. “I don’t want you to worry about being respectful. I want you to move around, sing, dance, cry and do everything to have fun.” When she said, “I love you,” some fans screamed, “likewise!” in return.

Her delicate and wispy voice was on point, with her trademark low and dreamlike style. She performed exciting songs in between chilled-out numbers to shift the mood. Eilish’s brother Finneas, who is also a singer-songwriter and record producer, joined the stage when she performed her acoustic song “Your Power.” The artist introduced him as her “best friend.”

The star of the show recalled her first concert and said, “Dude, wanna know something crazy? My first time playing (in Seoul) was four years ago tonight. That is so nuts! Thank you for everything. Thanks for having me back here.” In between songs, she checked to make sure that the audience enjoyed the concert to the fullest.

Since it is an English-language artist, concertgoers could not sing along to every song. Many simply clapped, raised their hands above their heads to sway from side to side, turned their cell phone lights on, and waved at the artist. Thousands of people did sing along, however, and their voices filled the venue when Eilish played songs that are popular here, such as “You Should See Me in a Crown” and “Bad Guy.” The performance immediately got fans on their feet. 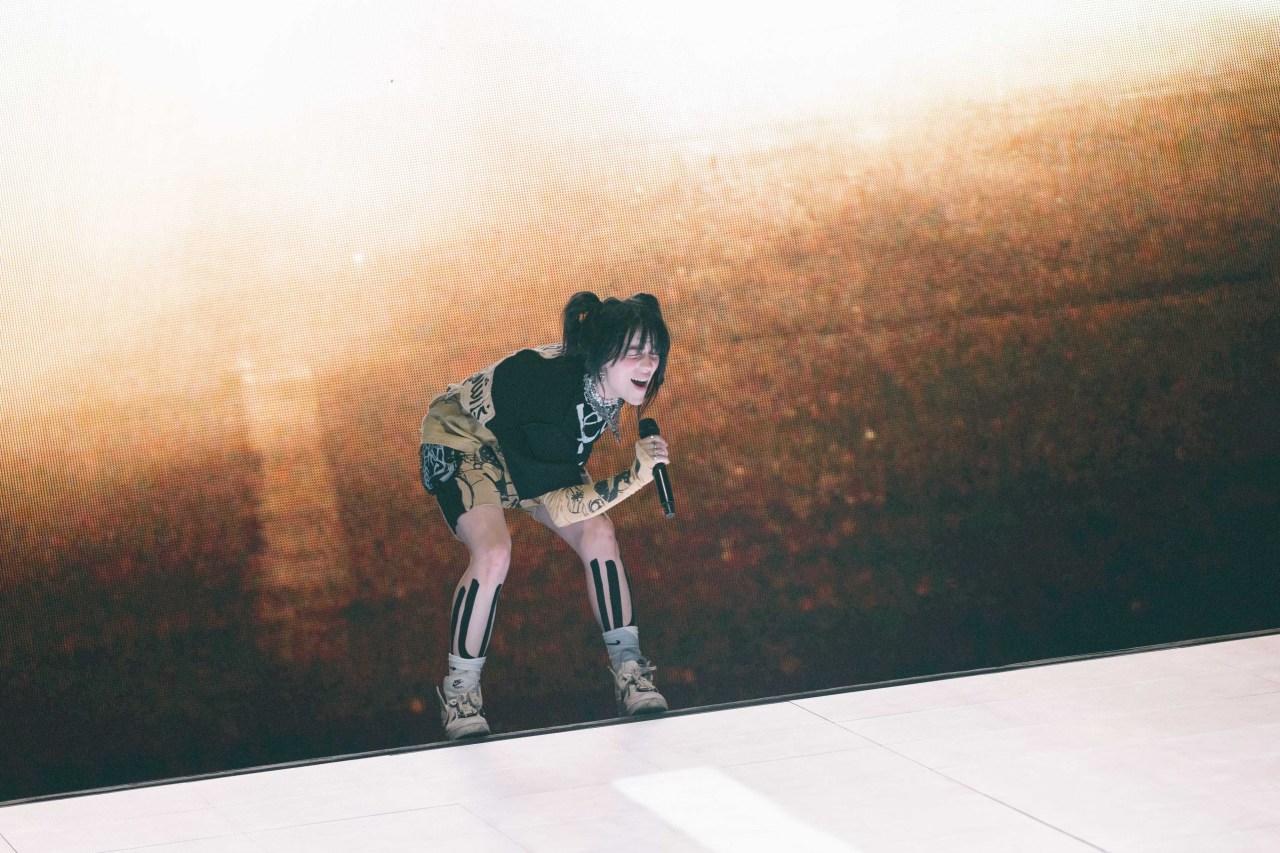 American pop star Billie Eilish performs during her second concert in Korea, “Hyundai Card Super Concert 26 Billie Eilish,” held at Gocheok Sky Dome in western Seoul on Monday. (Hyundai Card)
The 20-year-old musician, who started her musical career in 2016, performed for 90 minutes straight without taking a break. Unlike K-pop artists who often display video clips on screens to change their outfits, she stuck to the same outfit. The pop star was full of energy, galloping on the stage and dancing as part of her performance.

The most memorable moment from the concert was when a fan handed her Taegeukgi, the national flag of Korea, in the middle of her performance of “Lost Cause.” She wrapped the flag around her body, mirroring a performance as she did four years ago. She clearly wanted to share the meaning of the country’s historical event with local fans.

Before wrapping up, she said, “Thank you so much. I love you so much. Good night.” She bowed deeply at the waist several times. The singer also waved her hands and blew kisses. She left the stage and, despite the lack of an encore, she had given all of us a memorable night.