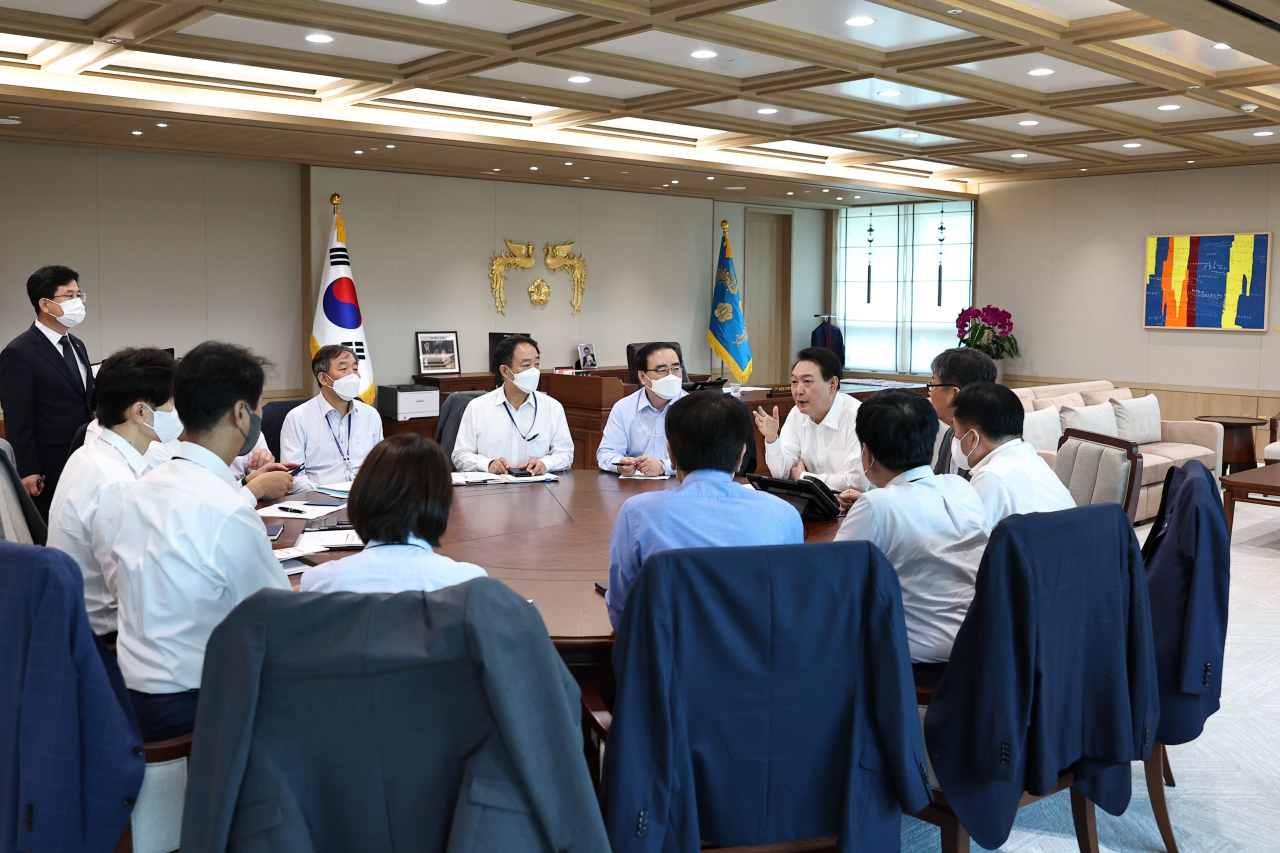 President Yoon Suk-yeol presides over a meeting of senior secretaries at the presidential office building in Yongsan, Seoul, on Monday morning. (Yonhap)

President Yoon Suk-yeol hinted at reorganizing the presidential office, saying he intends to “make changes” meticulously and substantially for the people as his approval ratings show no sign of rebounding.

It was once expected that a full personnel reshuffle would take place ahead of the 100th day of his office’s inauguration, but Yoon is likely to reorganize his office in a way that reinforces some functions, including public relations and government affairs.

Asked whether he would reorganize the presidential office during his Monday morning press briefing, Yoon said, “I’ve been busy with many things since taking office, but there are things I’ve been thinking about since vacation.”

Regarding the direction of the reshuffle, Yoon said, “Changes should be for taking care of the people’s livelihood and public safety. I don’t think it’s a matter of political gain and loss.”

Chief of Staff Kim Dae-ki and Senior Political Affairs Secretary Lee Jin-bok, who were once rumored to be replaced, are expected to stay in office. According to local reports, there are many pending issues to be addressed, and no clear alternatives for either post.

Yoon is also reportedly considering appointing some political figures as special advisers to strengthen the functions of presidential aides.

The necessity of reshuffling Yoon’s office comes amid a sense of escalating crisis within the office, with his approval ratings dropping below 30 percent for several weeks -- a rare case for a new president who been in office for less than 100 days. His approval ratings have been dragged down by controversies surrounding personnel appointments, unfair hiring and unexpected flip-flop moves, such as lowering the minimum school entry age.

Former Deputy Prime Minister and Education Minister Park Soon-ae stepped down after 34 days in office to take responsibility for the confusion of the “five-year-old school” entry age policy, but her resignation was not enough to help Yoon’s approval ratings rebound.