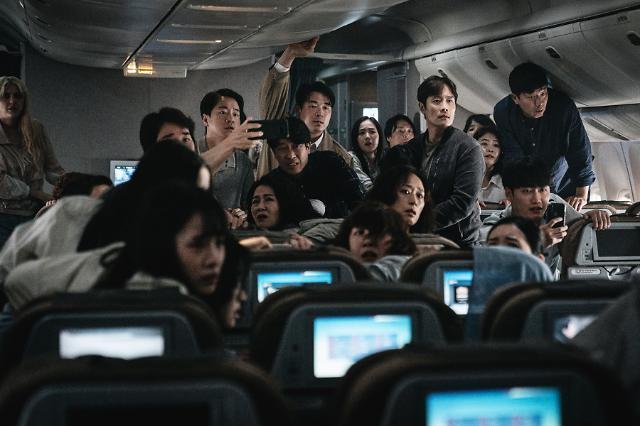 One of the top four Korean film distributors, Showbox announced that it is looking into rumors that there might be a company intentionally producing negative reviews about its film “Emergency Declaration,” directed by Han Jae-rim.

“If true, it could harm the Korean film industry as a whole in the long term, so we are looking into the case, regardless of its relevance to ‘Emergency Declaration,’” an official from Showbox said.

This rumor has been spreading through online communities since the Korean high-budget disaster film was released Aug. 3. Some anonymous online commenters have also claimed that a local marketing company is producing negative reviews about Han’s movie because of investments into competing movies.

The rumor mushroomed further after film critic Kim Do-hoon on Aug. 6 claimed via social media that By4M is the marketing company behind the negative reviews.

Among four highly anticipated Korean movies released this summer --“Emergency Declaration,” “Alienoid,” “Hansan: Rising Dragon” and “Hunt” -- Han’s movie is the only film that the marketing company did not put money into, Kim said.

He added that the company had also been accused of Korean music chart manipulation in the past.

However, the marketing firm denied the accusation, saying it has only conducted viral marketing to create positive buzz, and has never done anything to negatively affect competing films.

Han’s aviation disaster flick, which cost more than 24.5 billion won ($18.76 million) to produce, had been one of the most anticipated films to be released this summer mainly due to its star-studded cast of top actors Song Kang-ho, Lee Byung-hun and Jeon Do-yeon.

The film centers on the struggle to land a plane after a detective is tipped off that a suspected terrorist has boarded the plane.

Meanwhile, ticket sales for “Emergency Declaration” reached 1.88 million as of Sunday, according to data from the Korean Film Council.

The film has also been invited to the Orbita competition section of the Sitges Film Festival, which specializes in fantasy, thriller and horror films. The festival will be held in Barcelona, Spain, from Oct. 6 to 16.