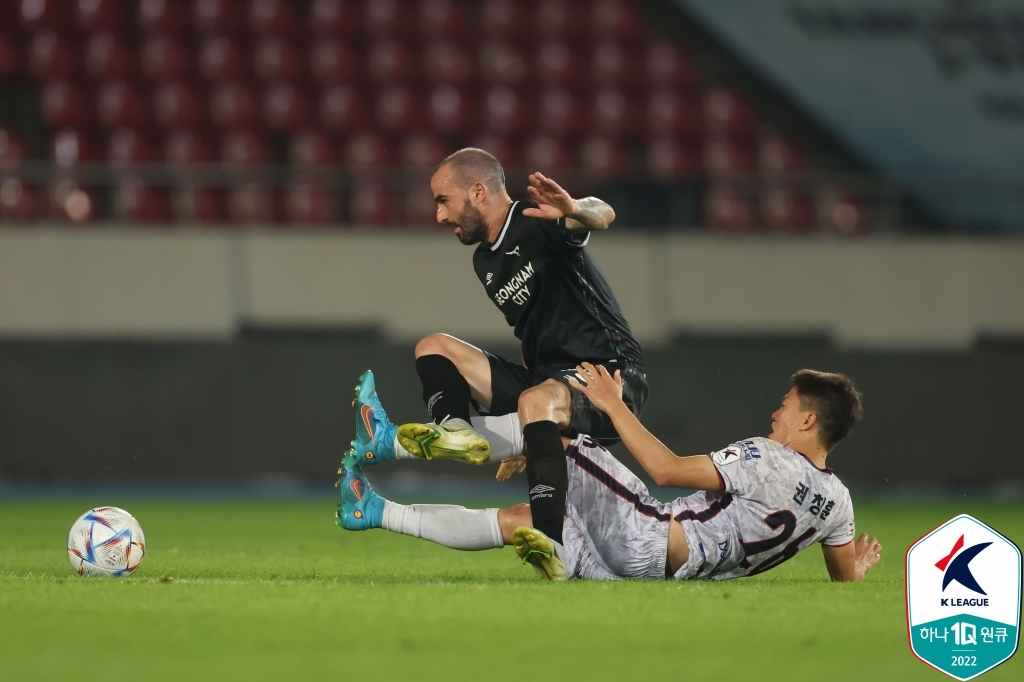 While the title race has been drawing most of the attention in the top South Korean football league in recent weeks, the spotlight will turn to the bottom of the tables this weekend, with the two worst clubs gearing up for their third meeting of the season.

Seongnam have been in last place for most of the season and with 18 points, they trail Suwon by six points through 25 matches. But they have shown some signs of life lately. They enjoyed their first winning streak of the season on July 30 and Aug. 2, beating a pair of top-five teams in Incheon United and Jeju United, respectively, before coming back down to earth in a 4-1 loss to Gimcheon Sangmu FC last Friday.

Seongnam will be banking on a trio of foreign players who have been in good form of late: Milos Raickovic, Fejsal Mulic and Manuel Palacios.

Suwon Samsung have just one victory in their past 12 matches. They're reeling from a 4-2 loss to intra-city rivals Suwon FC last Saturday.

On a brighter side, Suwon Samsung have scored at least two goals in back-to-back matches, the first time they've done that all season. An Byong-jun, a Japanese-born forward of North Korean descent whom Suwon Samsung acquired on July 6, has two goals in five matches with his new club.

They still have the fewest goals in the K League 1 this year, though, with 19 in 25 matches.

Suwon Samsung beat Seongnam 1-0 in their previous meeting on May 14. They had a 2-2 draw on March 5.

Another promotion-relegation playoff will pit the 10th-ranked team from the K League 1 against the winner of a K League 2 playoff winner.

As for the two top dogs, the league-leading Ulsan Hyundai FC will host Daegu FC on Saturday, in search of their first victory in August following back-to-back draws.

Daegu FC have not won since June 21, posting five draws and four losses since.

Ulsan have 52 points through 25 matches, while Jeonbuk Hyundai Motors, having played one more match, are right behind at 49 points. Jeonbuk will visit Incheon United also Saturday.

Jeonbuk are undefeated against Incheon in their past 10 meetings, with six wins and four draws. (Yonhap)