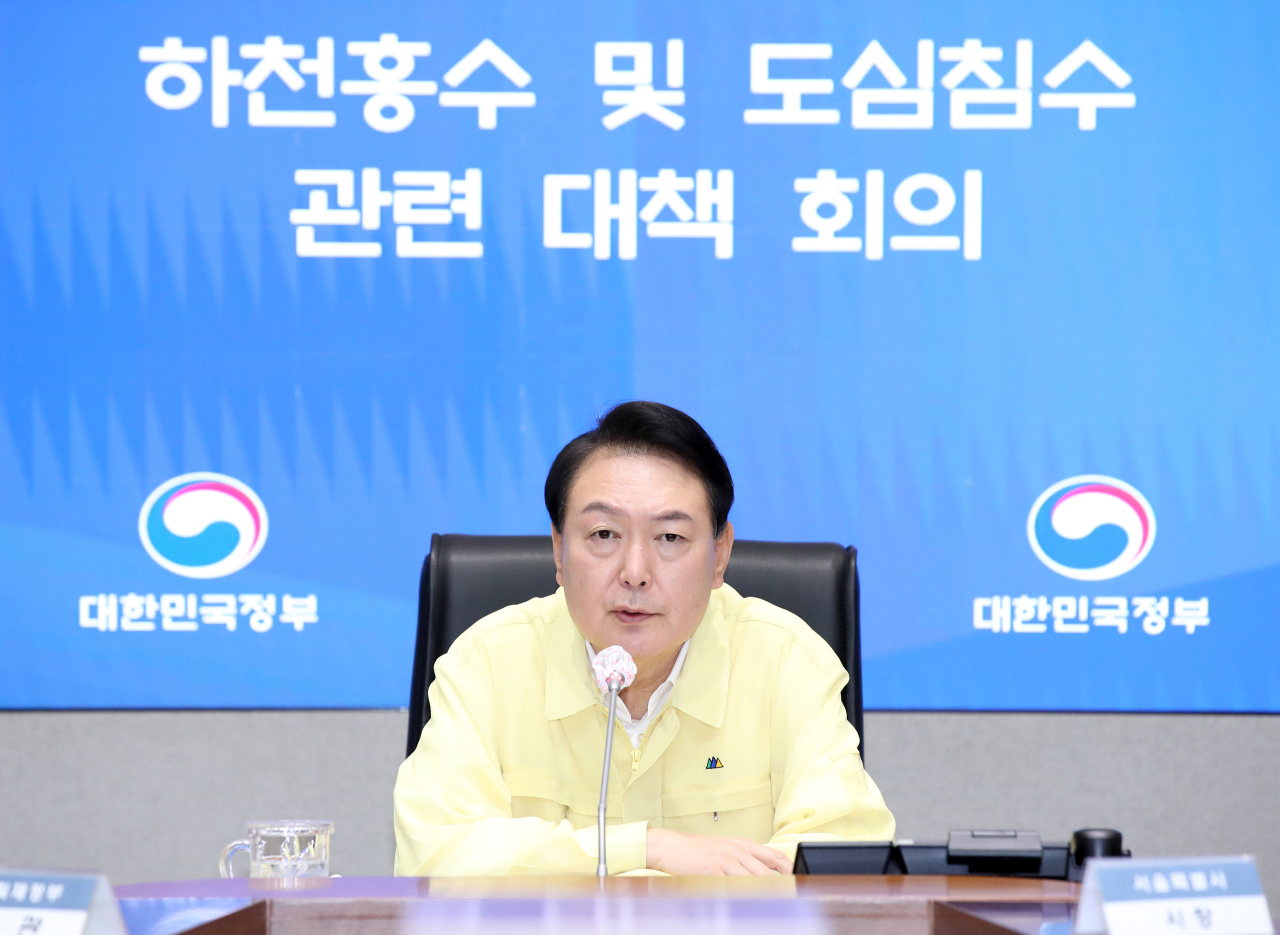 President Yoon Suk-yeol on Wednesday issued an apology over the downpour that plagued the greater Seoul area, and pledged fundamental measures to prevent a repeat of Monday night’s havoc.

Due to the record-setting heavy rain which hit Seoul, its surrounding regions and Gangwon Province from Monday to Tuesday, nine people have been reported dead, seven missing and some 600 displaced as of Wednesday morning.

The president presided over an emergency meeting held at the governmental complex in central Seoul, Wednesday.

“I, representing the government, offer an apology to the people who went through inconveniences and pay tribute to those who lost their lives,” Yoon said, referring to a family who died due to the heavy rain on Monday.

The meeting was originally scheduled to be chaired by Prime Minister Han Duck-su, but Yoon took over his place, canceling his other scheduled activities.

“Those who are in difficulties (financially) and physically are more prone to the damages of natural disasters. Korea will only be safe when they are safe,” Yoon said.

Yoon continued to call for authorities to work out preventive measures.

“The state holds infinite responsibility for the safety of its people. Every public service official should know about this,” Yoon said at an another emergency meeting held to respond to the flooding damages.

“The flooding of the downtown area is more than just an event that happened for the first time since we started to measure the weather. We have to come up with fundamental countermeasures for these phenomena,” Yoon said.

“We should operate an immediate warning system, monitoring all water levels of the nation and simulating (what could happen) using the latest digital technologies, as ours have advanced greatly,” Yoon said.

The Central Disaster and Safety Countermeasures Headquarters said Wednesday morning that some 550 people who have been displaced from their homes due to flooding have yet been able to return to their homes.

A total of 2,682 houses and shopping malls were flooded. Retaining walls collapsed in seven places and there were 27 landslides in the Seoul area and Gangwon Province.

Meanwhile, the rainfall ceased in the Seoul area as of Wednesday, and moved to the central region of Korea, including South and North Chungcheong Provinces and nearby regions such as North Jeolla Province and North Gyeongsang Province.

Daejeon and the Chungcheong region received more than up to 60 millimeters of rain per hour as of press time.