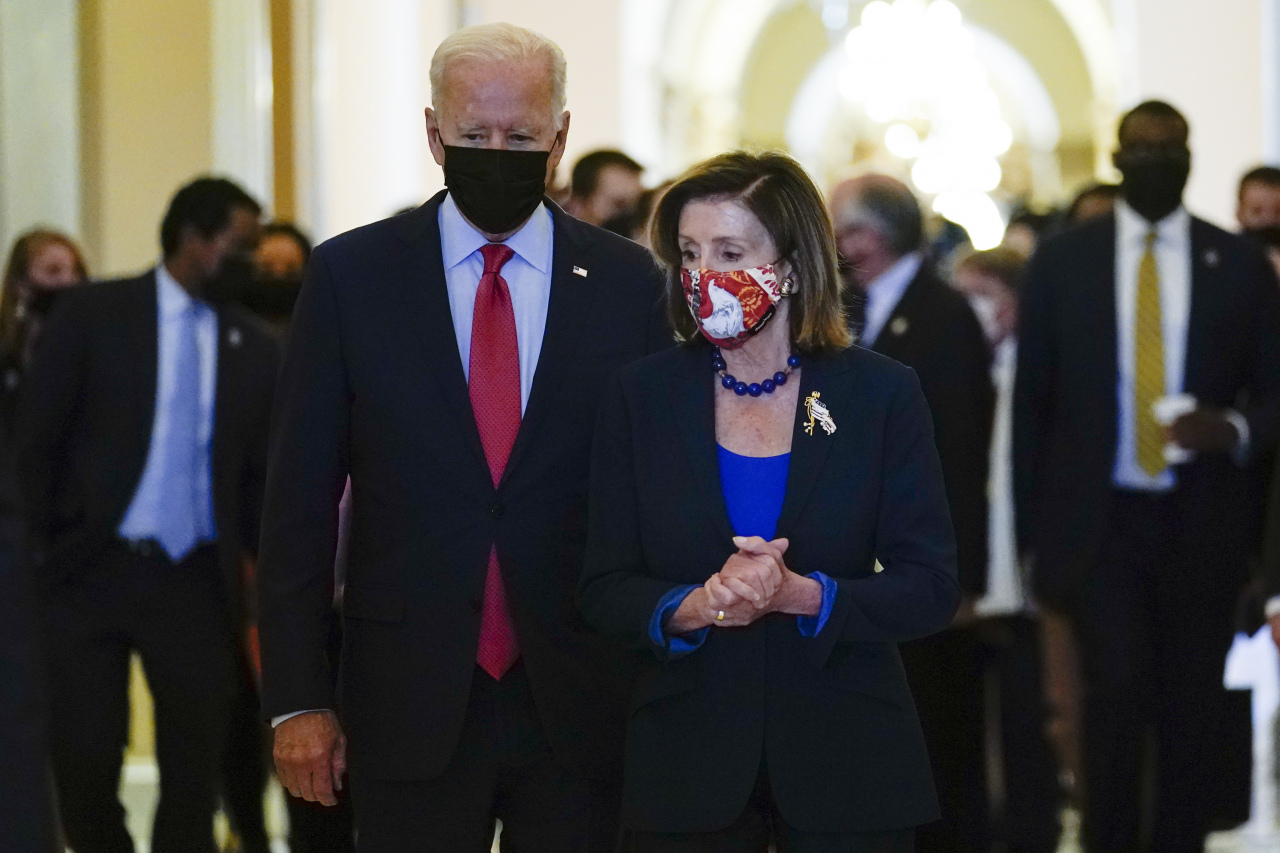 President Joe Biden walks with House Speaker Nancy Pelosi of Calif., on Capitol Hill in Washington on Oct. 1, 2021. (AP-Yonhap)
BEIJING (AFP) -- China’ thunderous response to US House Speaker Nancy Pelosi’s Taiwan visit brought cross-Strait tensions to their highest level in years and sparked an outpouring of nationalist zeal online, but the mood on the streets in mainland China is a little more circumspect.

Enraged by Pelosi’s trip, Beijing last week launched some of its largest-ever military drills encircling the island while suspending cooperation with the United States on issues including climate change and defence.

China’s tight grip over the internet, with a massive system of censorship that scrubs posts casting the Communist Party's policies in a negative light, has limited public debate over just how far Beijing should go in its showdown over Taiwan.

While it is difficult to gauge Chinese public opinion, experts say the public broadly supports reunification and would not accept moves suggesting acceptance of Taiwan’s independence.

But beyond the calls from more extreme citizens online -- with some even calling for war -- Beijingers told AFP they still pinned their hopes on a peaceful process.

“I'm not too worried because I know it won’t happen... whoever turns to force first (over Pelosi's visit) will be in the wrong,” said Zhao, a 29-year-old Beijing resident who only gave his surname.

China sees Taiwan as part of its territory and has vowed to one day take it, by force if necessary, with the self-ruled island’s eventual reunification and absorption into the mainland an article of faith for many Chinese.

“Many Chinese hope for reunification with Taiwan. This is an idea that's been instilled since childhood and is seen as politically correct,” Zhao added.

“But there has been less in-depth discussion, because the Internet does not allow for diverse views and offline talks can easily land in conflict.”

For China’s President Xi Jinping, the timing of Pelosi’s visit could not have been worse, David Sacks, research fellow at think-tank Council on Foreign Relations, told AFP.

Beijing’s leadership is keen to project stability and strength at home ahead of the Communist Part’s 20th congress -- at which Xi is expected to be anointed for an unprecedented third term.

“Xi likely felt as though he had to act, for fear of looking weak or like somebody who’s not in control of the most important relationship for China,” Sacks said.

But while China’s military manoeuvres have stirred pride among citizens, residents told AFP this does not always relate to support for those at the top.

“People are proud, but it’s mostly over China's military might,” Zhao said. “They seldom mention the leaders.”

Another Beijing resident who gave her name as Guo said she didn’t “think this situation will change attitudes towards our top leadership” among the public.

“Taking a step back, they don't need people’s support either, they're not picked by votes,” the 27-year-old said.

Coupled with wariness towards foreign powers, trade bans on Taiwan and military drills “will be welcomed” by the Chinese public, Jocelyn Chey, former Australian diplomat and visiting professor at the University of Sydney, told AFP.

Pelosi’s visit also came in the wake of significant domestic hurdles for the ruling party -- unpopular lockdowns and debate surrounding Xi's zero-Covid policy, the closure of the international borders for travel, and woes in the property market, Chey notes.

But where criticism of the leadership is taking place, said Sacks, it is more often from those who believe China has not gone far enough in its spat over Taiwan.

This means officials will continue to calibrate their response and intensify it accordingly, he added.

“Unless this gets really out of control, even though there has been some pushback to Xi’s response, I don't think that it will in any way threaten his position at the upcoming party congress,” Sacks said.

For some however, the military escalation -- blamed on Pelosi’s visit -- has opened new and concerning possibilities.

“Before this, some people around me felt that peaceful reunification could be achieved, as it was a matter between us and Taiwan,” said a Guangzhou resident surnamed Luo.

“But with the US' involvement, some are starting to see it as a battle with America.”