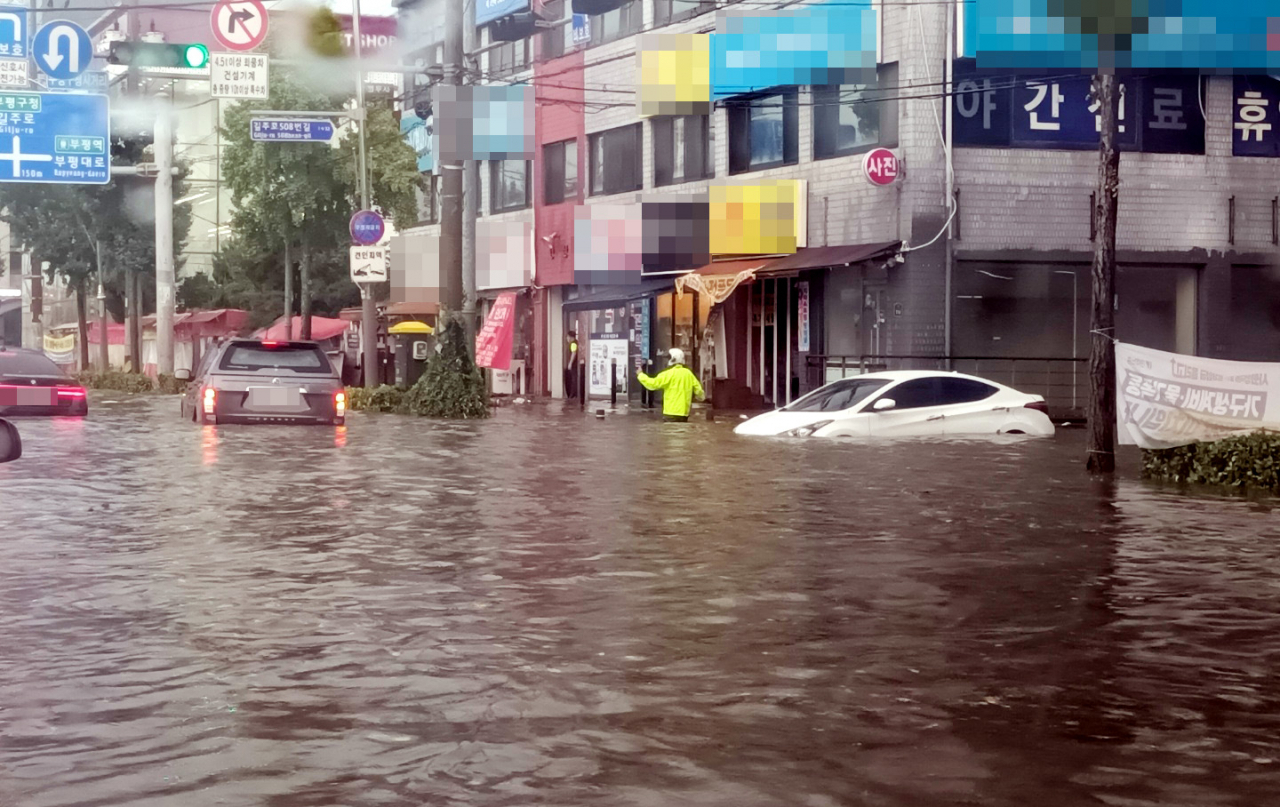 This photo, provided by a reader, shows roads in the western port city of Incheon submerged on Monday. (Yonhap)

Heavy downpours battered the country's central region, including the capital area, on Monday, flooding homes, roads, buildings and other properties.

Southern Seoul received more than 100 mm per hour, forcing sections of the subway to halt, and causing blackouts and residents in low-lying areas to flee for safety.

Prime Minister Han Duck-soo ordered relevant agencies to stay alert and do their best to prevent causalities and property damage in high-risk areas.

The Korea Meteorological Administration (KMA) issued heavy rain watches across the capital and the western port city of Incheon as well as northern parts of Gyeonggi Province that surrounds Seoul and northern Gangwon Province.

Such advisories are issued when precipitation is predicted to surpass 60 millimeters in a span of three hours or 110 mm in 12 hours.

Heavy downpours hit Seoul especially later in the day, causing flooding and blackouts in some regions, with residents in low-lying areas evacuating for safety and sections of subway lines forced to halt.

Seoul had received 90.5 mm of rain as of 8 p.m. In particular, the Dongjak district in southern Seoul had 137 mm of rain per hour, the worst rainfall in decades.

Some stores at the express bus terminal in the southern Seoul district of Gangnam had been under water. There have been reports of water leaks at some facilities at the Convention and Exhibition Center in southern Seoul.

Casualties were not reported in those areas, but property damage occurred, including the displacement of two residents in Cheorwon.

Authorities also received numerous reports of submerged vehicles and farmlands, destruction of roads and fallen trees from the areas hit by the torrential downpours.

The weather agency earlier said the country's central regions and northern Gyeonggi Province are forecast to receive downpours combined with strong winds, thunder and lightning as a clash of cold and warm air masses produces a stationary front. (Yonhap)