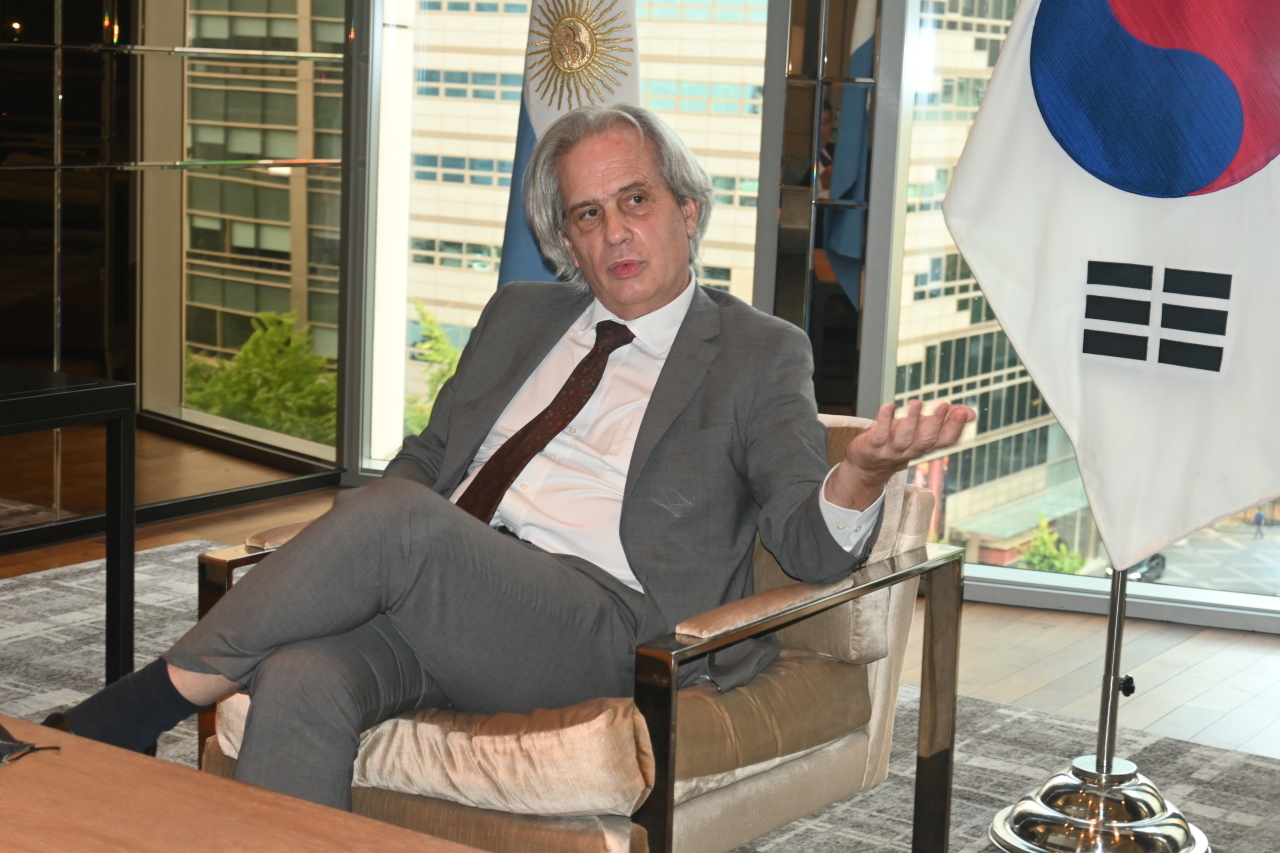 In his official visit to Seoul from July 27-29, the deputy foreign minister attended the 8th high-level political consultations meeting with Korean counterparts -- a diplomatic mechanism aimed at consolidating bilateral and multilateral cooperation between Argentina and Korea on issues of common interest.

In an interview with The Korea Herald, Tettamanti highlighted the enormous potential of Argentina and Korea to develop strategic and comprehensive partnerships in connection to Argentina’s actions such as consulting Korean companies, agencies, ministers, think tanks and technology institutions for collaborations.

“Argentina has natural resources, knowledgeable competence, a profile in science and technology that needs to be cooperated with Korea,” stressed Tettamanti.

He recommended Argentina’s resources such as lithium reserves to achieve energy transition stressing shared commitments with Korea to move into a green energy world.

Tettamanti was referring to utilizing the largest reserve of lithium resources located in the Andean salt flats system called the “Lithium Triangle,” with Bolivia and Chile.

According to Tettamanti, lithium, a key metal at the heart of the global energy transition, is an industry that must be developed, as electrifying mobility and energy matrixes increase pressure on lithium reserves that serve as an input for producing batteries.

Among the Lithium Triangle countries, Argentina has the greatest opportunities for new exploration and exploitation activities, he said. According to the vice minister, Argentina has a regulatory framework that regulates and facilitates the exploitation of lithium more open to investment compared to neighboring countries in the triangle. 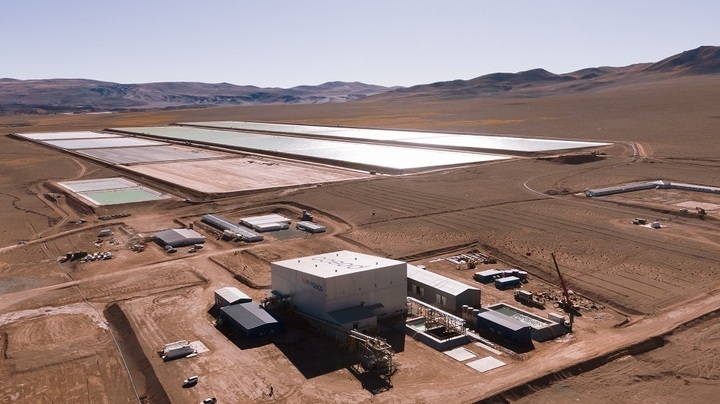 The plant is scheduled for completion in the first half of 2024 with a capacity that is sufficient for 600,000 electric vehicles. Annual output will be expanded to produce up to 100,000 tons by 2028, according to Posco.

“Market expectations place Argentina at the center of the lithium discussion,” said Tettamanti referring to establishment of H2 inter-ministerial council initiative under a state policy.

Energy transition is a high priority for Argentina to adapt and mitigate climate change, and is a strategy to develop new businesses and economic sectors as well, he said.

According to Tettamanti deepening Argentina-Korea cooperation to use hydrogen as a fundamental energy source and achieve global decarbonization aims would serve bilateral interests.

“To introduce Argentina in the hydrogen economy, collaboration with Korea is important, given its degree of development and expertise,” Tettamanti stressed. 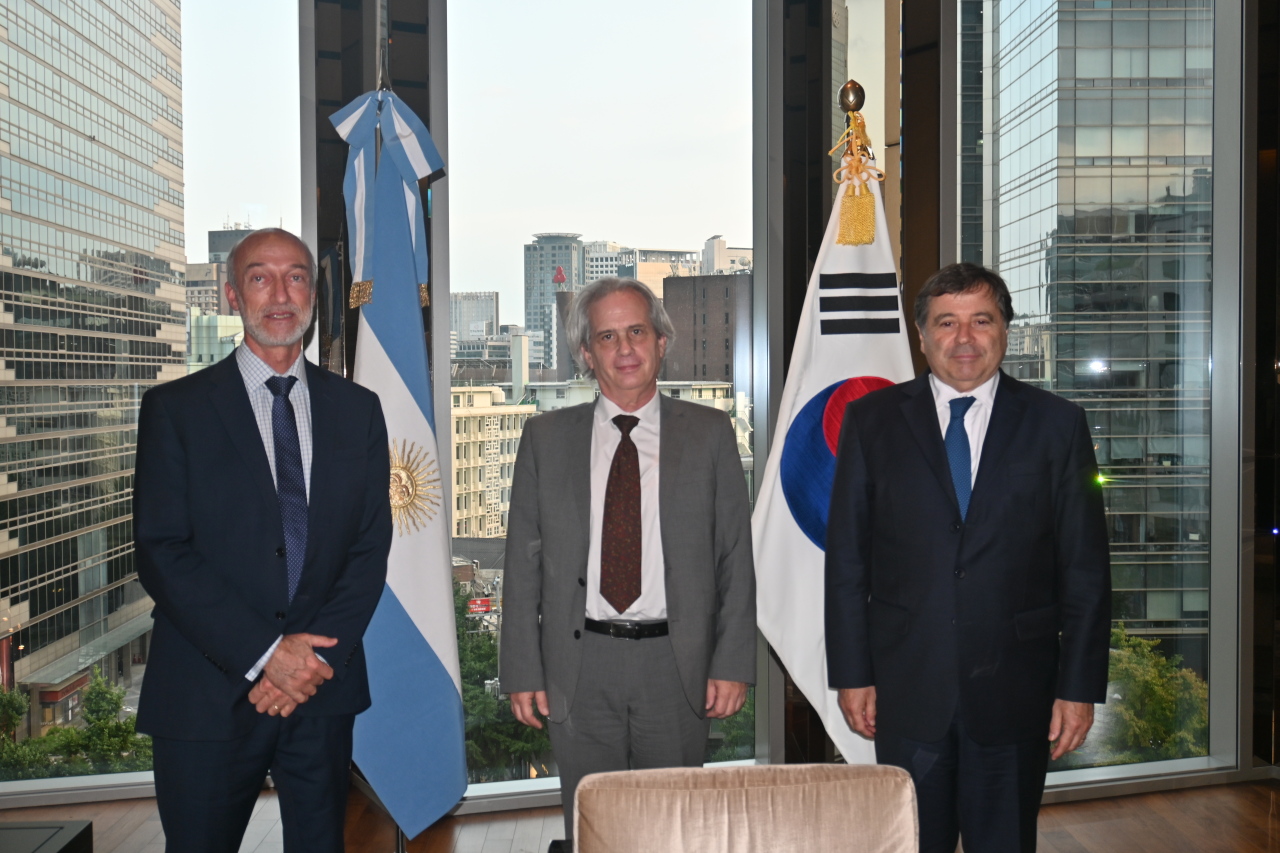 Argentina’s Deputy Foreign Minister Pablo Anselmo Tettamanti poses for a photo with Argentine Ambassador Alfredo Carlos Bascou after an interview with The Korea Herald in Seoul on July 28. (Sanjay Kumar/The Korea Herald)
Tettamanti applauded memorandum of understanding on information and communication technology signed between Argentina and Korea to enable artificial intelligence, Internet of Things, 4G and 5G, blockchain and cybersecurity urging Korean companies in Argentina to explore potential opportunities in IT, bio-technology, water and sanitation, aerospace, the satellite industry, and startups.

“We agreed to strengthen the comprehensive partnership Argentina and Korea have shared since 2004,” he said adding that he and Choi analyzed total bilateral trade flows, access of Argentine products to Korean market and Argentina as a reliable food and energy security source.

Asked about plans to connect the Korea with the Community of Latin American and Caribbean States, or CELAC, the deputy foreign minister welcomed cooperation initiatives with Korea.

CELAC is a regional bloc of Latin American and Caribbean states with 33 member countries speaking five different languages for dialogue and political agreement.

“Korea of course, is a country of interest,” he said.

CELAC is open to any proposal of dialogue with third parties, said Tettamanti referring to CELAC’s Point 9 Work Plan which accords to dialogue with extra-regional partners.

Tettamanti who also served as Argentine Ambassador to the UN from 1980-1989 applauded Korea’s cooperation in multilateral forums such as the UN, G20 or Forum of East Asia–Latin America Cooperation (FEALAC) as good examples of shared values.

The minister also touched upon Argentina-Korea cultural ties stressing the growth of the Korean Wave in Argentina. 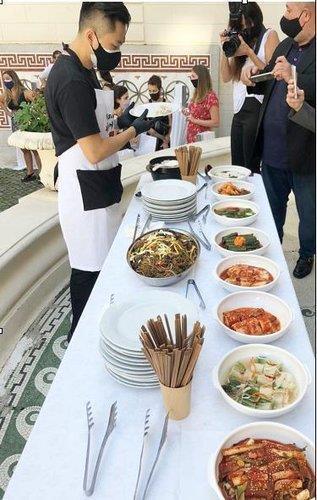 Photo showing a kimchi tasting event held in April at the South Korean culture center in Argentina. Argentine Senate unanimously passed a resolution designating Nov. 22 as Kimchi Day on Oct. 6, 2021. (South Korean culture center in Argentina)
He said that Korean food is no longer just a trend in Argentina, giving the example of the 7th Hansik food festival held in Buenos Aires in 2022 and participation of more than 30 restaurants specialized in Korean food.

“The Argentine Congress has also declared the 22nd of November as ‘Kimchi Day,’” the deputy foreign minister said.

According to Tettamanti, Koreans settled mainly in the Flores neighborhood of the City of Buenos Aires and also lived in places as distant from the capital as Ushuaia.

“Today, Korean Argentines, in some cases with more than 50 years in the country, are part of Argentina in all its aspects, including culture,” the deputy foreign minister said, naming artists such as Kim Yun-shin, film directors Daniel Kim, Cecilia Kang, and popular actor Kim Chang-sung.