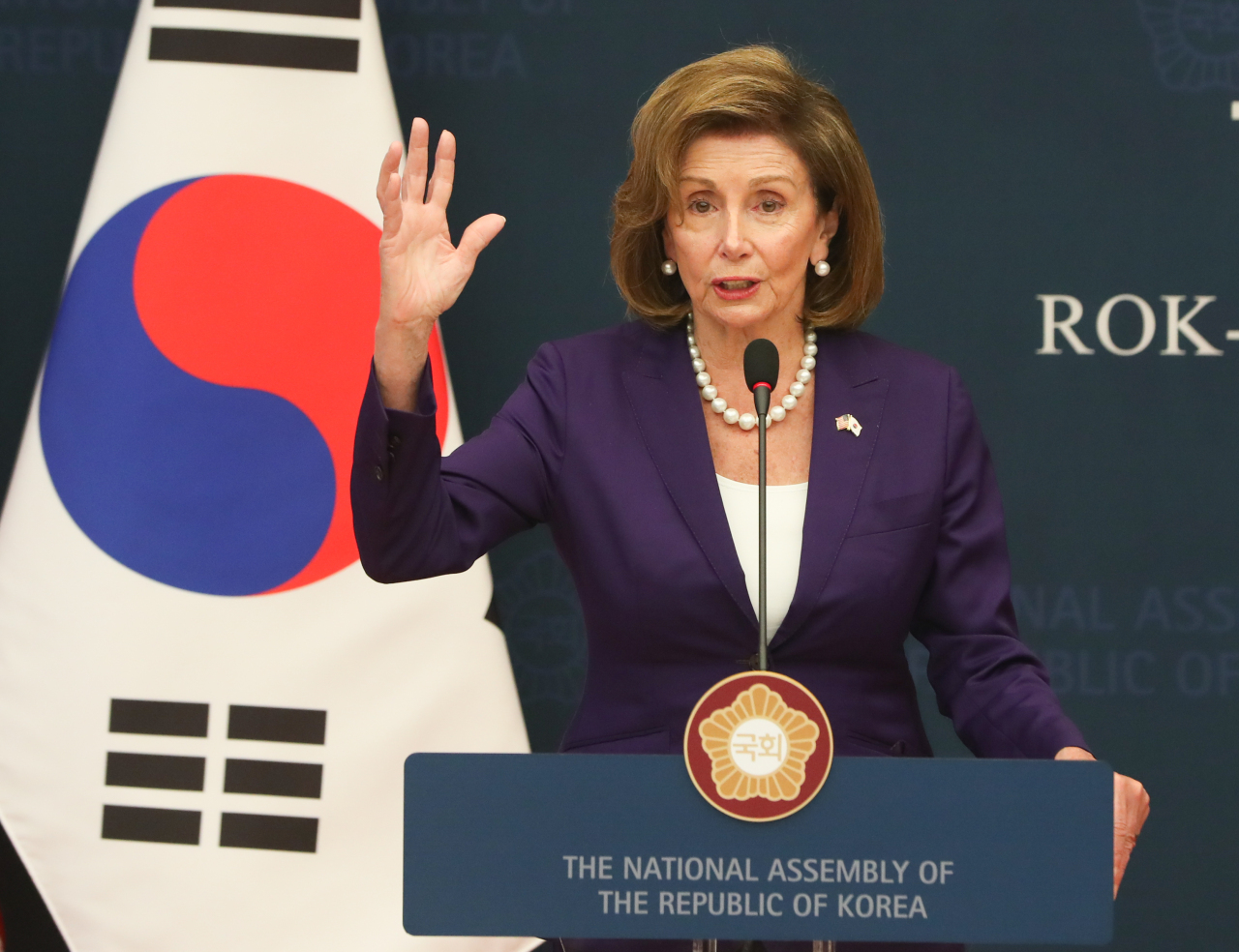 US House Speaker Nancy Pelosi speaks during a joint press event at the National Assembly in Yeouido, central Seoul, on Aug. 4. (Yonhap)
Nancy Pelosi, the speaker of the US House of Representatives, left South Korea on Thursday, but controversy over Seoul’s response to her visit continues.

When Pelosi arrived here late Wednesday following her stop in Taiwan, no South Korean delegation was present to greet her at the airport as is custom for a high-level visit. President Yoon Suk-yeol, who was on vacation, did not take time out to meet with Pelosi in person and instead opted for a phone call.

While deigning not to meet with Pelosi face to face, Yoon was spotted drinking with the cast of a play on the night of the US House speaker’s arrival.

The move was made all the more inexplicable by the fact that the vacationing president was staying in his Seoul condo, only about a 30-minute drive away from the National Assembly where Pelosi was to be hosted by Kim Jin-pyo, the South Korean parliament’s speaker.

After speaking over the phone for about 40 minutes, Yoon sent a shoddily composed tweet in English that read: “It was my great pleasure to have a phone conversation with Speaker Pelosi and the US Congressional delegation. We reaffirmed our firm commitment to work together to strengthen the ROK-US global alliance.”

Yoon’s in-person absence throughout Pelosi’s Seoul visit and other diplomatic gaffes drew bewilderment and condemnation from South Korea’s political figures, including those from his own party.

The initial explanation from Yoon’s office was that the president would not cut short his vacation. Later the presidential secretary for public affairs told reporters that the decision to forgo a meeting with Pelosi was based on a “broad consideration of national interest.”

The ruling People Power Party Rep. Ha Tae-kyung, who is on the parliamentary committee for foreign affairs, said that he believes Yoon should have met Pelosi. He also called for an apology from the office of the National Assembly speaker for the lack of reception at the airport.

The South Korean public has not reacted favorably to Yoon bypassing the US speaker. According to the Korea Society Opinion Institute’s poll of 1,002 South Koreans, taken from Friday to Saturday, 60.3 percent replied it was “inappropriate” for the president to not have met with Pelosi.

In response to the criticisms, a senior parliamentary official told a closed-door briefing Thursday that the protocol and events were “discussed in advance” with the US delegation.

“I can tell you that our protocol team did everything to ensure Speaker Pelosi got the warmest welcome and that she seemed very pleased during her time here,” he said at the briefing was held a few hours after the joint press statement from the US and South Korea speakers.

Such unceremonious reception for someone of Pelosi’s rank is “unthinkable” and “completely out of convention for diplomatic courtesy,” said Yang Seung-ham, an emeritus professor of political science and diplomatic relations at Yonsei University in Seoul.

“The speaker is the No. 3 figure in the line of the presidential succession in the US, South Korea’s most important ally,” he told The Korea Herald. “Our officials from the Ministry of Foreign Affairs or the National Assembly should have been there to receive her at the airport.”

On critics describing Yoon as having “snubbed” Pelosi, Kim said the presidential office’s failure to arrange a meeting with the US Speaker was “bewildering.” “His administration has stressed a closer relationship with the US.”

If Yoon had decided not to meet Pelosi to avoid offending China, it was “unnecessary,” he said.

Mitchell Reiss, who served as the director of the Office of Policy Planning in the US Department of State, was quoted by Voice of America’s Korean service on Friday as saying Yoon deciding not to meet with Pelosi was an “insult” and “a mistake on the part of (the South Korean presidential office).”

In a rare move the main opposition Democratic Party of Korea came to the president’s defense.

Rep. Woo Sang-ho, the party’s interim chair, told reporters on Thursday that he didn’t think Yoon not meeting with Pelosi was a problem.

“I don’t believe that the president not seeing Speaker Pelosi in person deserves criticism, considering the US-China tensions,” he said. “She came to Seoul after creating considerable friction with China.”