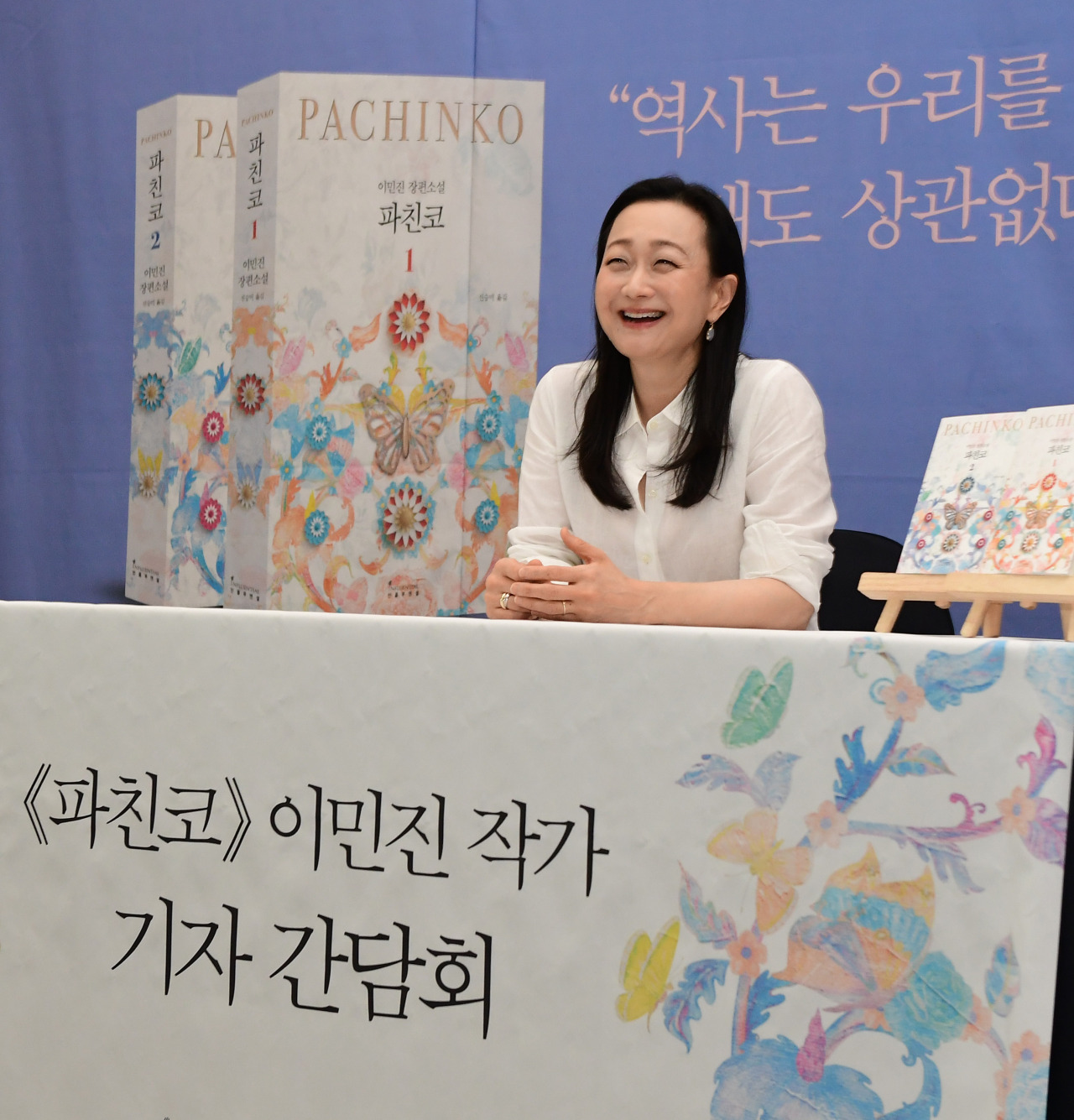 Min-jin Lee, the author of “Pachinko,” attends a press conference at the Korea Press Center in Seoul on Monday. (Influential)

Korean American writer Min-jin Lee, 53, spent some 30-odd years writing her second novel “Pachinko.” She interviewed numerous people in Korea, Japan and other places around the world for this book. Her quest for accuracy and authenticity even led her to abandon a previous draft in 2007 called “Motherland” which was nearly a full-length book.

It would take another decade for her to finish the book, but this version definitely had the impact that she intended. “Pachinko” became a bestseller in the US and Korea, and has been made into a TV show on Apple TV+.

Visiting South Korea to celebrate the publication of the new translated version of “Pachinko” under the Korean publishing house Influential, the author talked about the intention behind “Pachinko,” her upcoming book “American Hagwon” and why these books should reach the widest possible audience.

The idea for “Pachinko” was sparked by a story 19-year-old Lee heard in a lecture by a missionary, who talked about a 13-year-old Korean boy in Japan who committed suicide by jumping off an apartment building. The shocked parents later found out that their son’s school yearbook was filled with hate messages from his classmates such as “Go back to where you belong” and “You smell like Kimchi” because he was Korean Japanese. The story stayed with Lee and became the seed for her award-winning novel, which tracks four generations of “Zainichi,” a Japanese term for Koreans living in Japan, starting from the early 1900s.

This multigenerational story has touched many readers, some of whom came to understand their parents through reading it. In the past three years, a growing number of Korean readers have reached out to her to tell her something along the lines of, “Now I finally understand my mom, or I finally want to talk to my father,” Lee said.

“I believe that (younger generations) are really interested in who they are, and in the question of identity. And identity is a meaningless, empty container without understanding history,” she said. Part of her mission is to fill that container by making history an interesting story, she added.

Lee was born in Seoul in 1968 and emigrated to New York when she was seven. Lee loved writing, but never imagined being a writer -- partly because as an Asian woman in the 1980s, it seemed like an unrealistic dream. So after graduating from Yale University and Georgetown Law School, she became a lawyer.

But when she went through a health crisis in her mid-20s, she realized that life is too short to give up what she cherishes and decided to be a writer. However, she didn‘t know at the time that it would take so long to complete and publish her first novel “Free Food for Millionaires” in 2008.

Indeed, it was a long journey for Lee. She started from when writing was an elusive dream and when there were very few Asian readers at her book launch events. Now, she is able to delve into writing about another topic that can help understand Koreans better with her upcoming novel, “American Hagwon.”

But back when she was promoting her newly released book “Pachinko” in 2017, Lee noticed that the attendance was extensively non-Asian.

Indeed, a breakdown of her readers revealed that a majority of them were non-Asian Americans. She realized that her style of writing -- which she developed specializing in 19th century European and American literature -- might have appealed more to audiences already comfortable with that style. But at the time, the absence of Asian – and especially Korean -- readers made her wonder if she did something wrong.

Lee said that there are two concepts to be considered to understand the shift in both increased Asian readership and authorship: synergy and critical mass.

“A synergy is when you have things that are happening at once and you have a sort of magic that happens because you have different forces -- and the synergy is you have the Hallyu,” Lee said.

She added that right now, there are so many more Asian American and Korean American writers who have formed a critical mass. There are just enough of them in order to get attention, compared with the 1980s and 1990s. “That said, I don’t think enough of them can succeed. I wish more would be more successful,” she said. 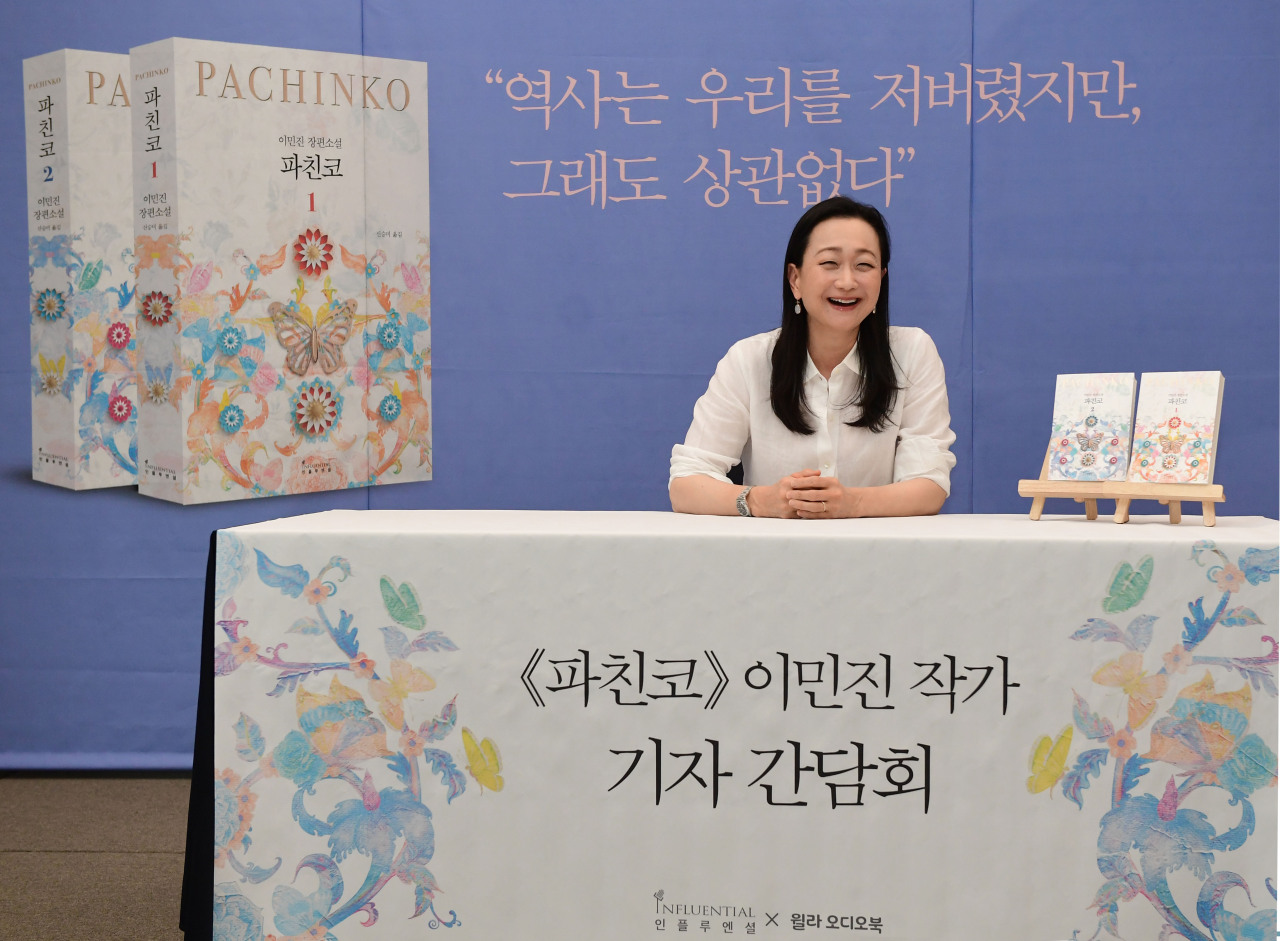 Min-jin Lee, the author of “Pachinko,” attends a press conference at the Korea Press Center in Seoul on Monday. (Influential)

Lee will continue to digging into Koreans’ roots in her upcoming book “American Hagwon.” Along with “Pachinko” and “Free Food for Millionaires,” the upcoming book will complete her “Korean diaspora trilogy.” Just like “Pachinko,” she intentionally borrowed the word “hagwon,” which refers to private after-school academies that are prevalent in South Korea.

She believes “hagwon” and what it represents is conducive to understanding the meaning of education for “Koreans around the world, not just in Korea.”

“In Korea, very often, education is linked inextricably with status, rank and hierarchy. I found that to be very interesting. So I’m working on that right now,” she said.

As she continues to uncover Korean identity, she wants to make her readers Korean -- something she often says during book events.

“When I say I’m trying to make you Korean, they always laugh, but I’m serious because when I read Tolstoy I’m Russian; when I read Charles Dickens I am British; when I read Hemingway I’m a white American man who is kind of crazy. All of those things are happening -- and that’s the power of literature,” Lee said.