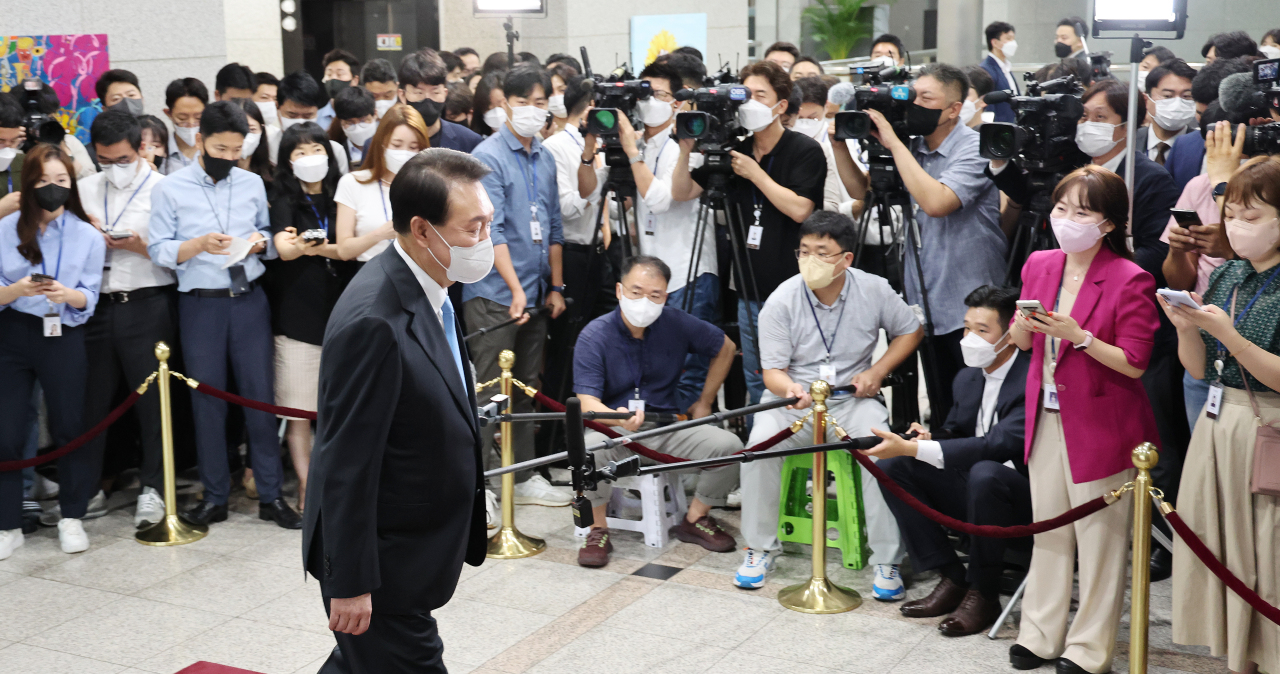 But critics say his rhetoric must be followed up with action if he is to regain public trust.

On Monday, media attention was focused on what Yoon would say during his regular morning briefing, held for the first time in 13 days amid record-low approval ratings. Over the weekend, all three major polling agencies -- Realmeter, Korea Society Opinion Institute and Gallup Korea -- released survey results showing that Yoon’s rating had reached new lows, with Monday’s Realmeter poll putting his support at below 30 percent for the first time.

The decline was mainly caused by controversies surrounding personnel appointments, unexpected reversals of policy and continued internal feuds in the ruling party unrelated to the struggling economy.

When asked about how he spent his weeklong vacation by a reporter on his way to work, Yoon said, “I started politics more than a year ago and had this break for the first time. It was a time to look back on the process of the last election and on the time since I took office.”

“Looking back, people called on me and got me to where I am, sometimes with harsh criticism and sometimes with warm support and encouragement,” Yoon said, adding he “appreciates” it.

He also answered sensitive questions calmly, not in an agitated tone -- which he showed at times in the past.

When asked about his plans for a change of personnel -- including the embattled education minister -- he did not specify any details, but hinted at the possibility of the reshuffle.

“I think all the government’s power comes from the people,” Yoon said, adding he would look at all the problems “from the perspective of the people” and “take action if necessary.”

Yoon, who has been in office for less than 100 days, now faces many challenges.

The main factors dragging down his approval ratings are controversies surrounding personnel appointments and unfair hiring.

Most recently, first lady Kim Keon-hee’s acquaintance surnamed Kim, who was a colleague of her graduate school, was found to work as a senior administrator in the presidential office. Although the presidential office denied the speculation that Kim recommended her colleague, it added to the growing list of unfair hiring practice allegations related to the Yoon administration, which have taken place several times over the past three months.

The Education Ministry has been under fire recently after announcing a lowering of the school entry age, which was not among the presidential election pledges or list of national tasks. As criticism intensified, Education Minister Park Soon-ae announced her resignation Monday afternoon.

The internal feud within the ruling People Power Party also showed no sign of ending.

The party leadership seems to be bent on keeping its power, while ordinary people face difficulties due to the economic slowdown, pandemic repercussions and high prices.

Putting people’s livelihoods on the back burner, the party is now divided between lawmakers supporting Yoon’s close aide Kweon Seong-dong and suspended leader Lee Jun-seok. To make matters worse, Lee Jun-seok announced that he would take legal action, such as applying for an injunction regarding the launch of the party’s emergency response committee.

“Yoon still doesn’t seem to understand the seriousness of the situation,” the political commentator said. “What he needs to do is apologize to the people, carry out a personnel reshuffle and make concrete plans rather than just abstract rhetoric.”

The main opposition Democratic Party of Korea has urged President Yoon to do this.

“The president’s vacation is over, but the public’s concerns are not,” said Democratic Party floor leader Park Hong-geun on Monday.

“President Yoon needs to normalize state affairs as soon as possible by overhauling the Cabinet,” he said.