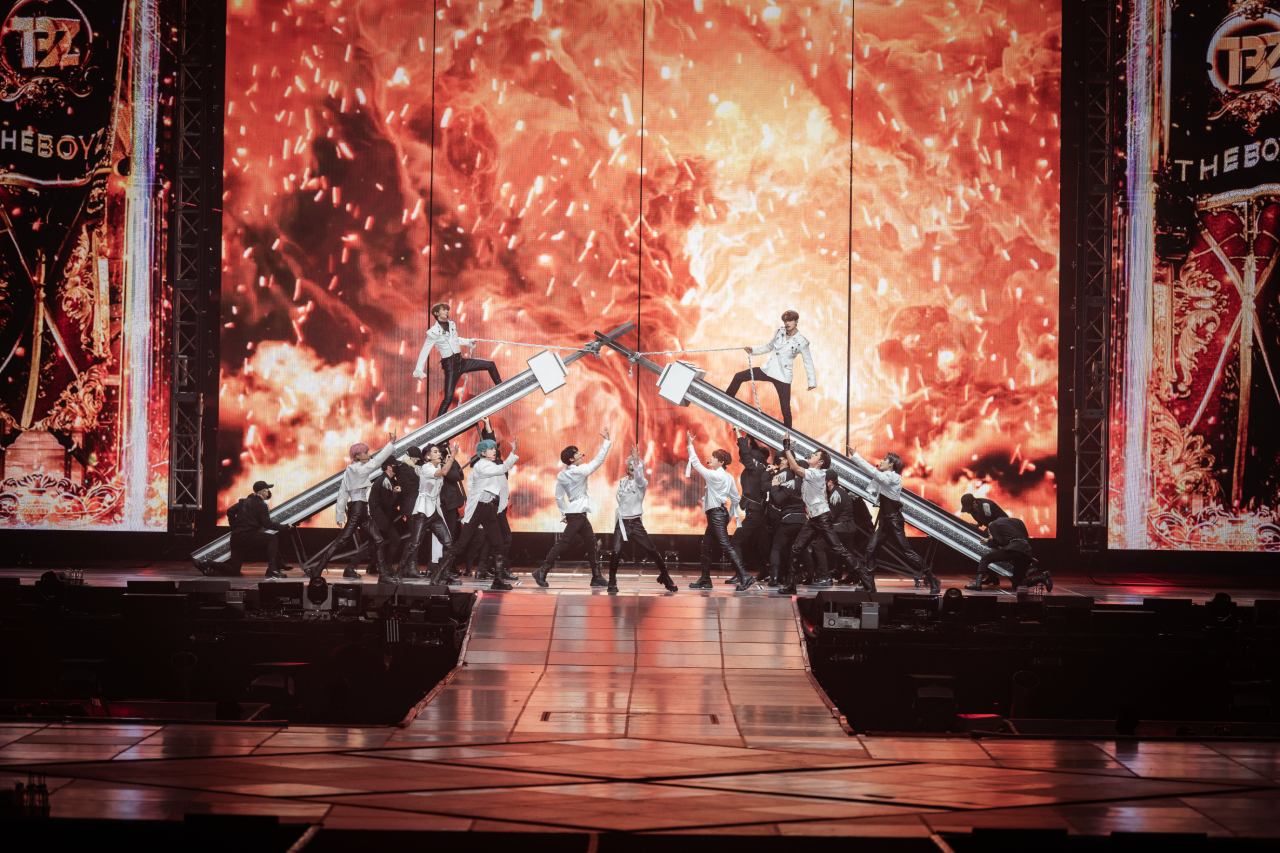 K-pop group The Boyz perform during its encore concerts for “The Boyz World Tour: The B-Zone,” in Seoul on Sunday. (IST Entertainment)
K-pop group The Boyz wrapped up its “The Boyz World Tour: The B-Zone” with a flourish in Seoul. Marking the end of the act’s first-ever international tour, the members cried out of joy on the final day of its three-day encore concerts on Sunday.

Boisterous noise and chants from nearly 8,000 fans filled the KSPO Dome, one of the country‘s largest indoor concert venues. The 11-piece act performed 31 songs during a jam-packed four-hour concert.

The night continued with the group performing songs such as “Shine Shine,” “Merry Bad Ending,” “Whiplash” and “Break Your Rules.” The Boyz upped the ante by showcasing special unit performances, dividing into vocal and performance units, performing “Goodbye” and “Scar,” respectively. 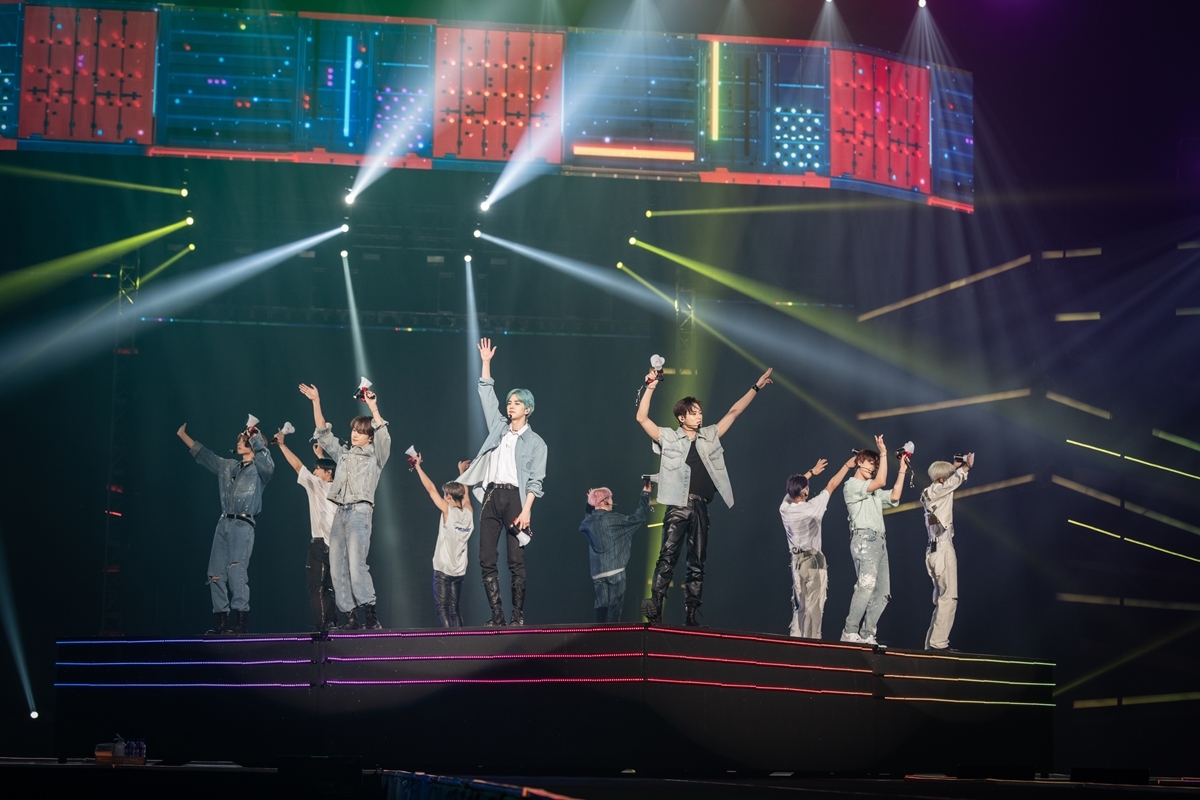 K-pop group The Boyz perform during its encore concerts for “The Boyz World Tour: The B-Zone,” in Seoul on Sunday. (IST Entertainment)
“We love you, The B!” the bandmates belted out several times in the middle of the concert, calling out the group’s official fandom’s name. Member Sunwoo also guaranteed that the concertgoers would likely lose some weight by the end of the night as they dance along to the songs.

The night took a majestic turn as the act showcased a new version of “Reveal,” which the act performed at the 2020 Mnet Asian Music Awards, and “Checkmate,” for which the band took home the trophy in Mnet‘s music competition program “Road to Kingdom” in 2020.

While the band is scheduled to make a comeback with its seventh EP “Be Aware” on Aug. 16, it unveiled a music video for “Timeless” and performed the fan song for the first time as well. Other songs on the encore concert’s set list included “Hypnotized,” “Nightmares,” “No Air,” and “Thrill Ride.”

Nearing the end of the event, the act tried to take some group photos with the audience. The fans started singing a fan song while holding banners in unison, which led the members’ eyes to turn red. 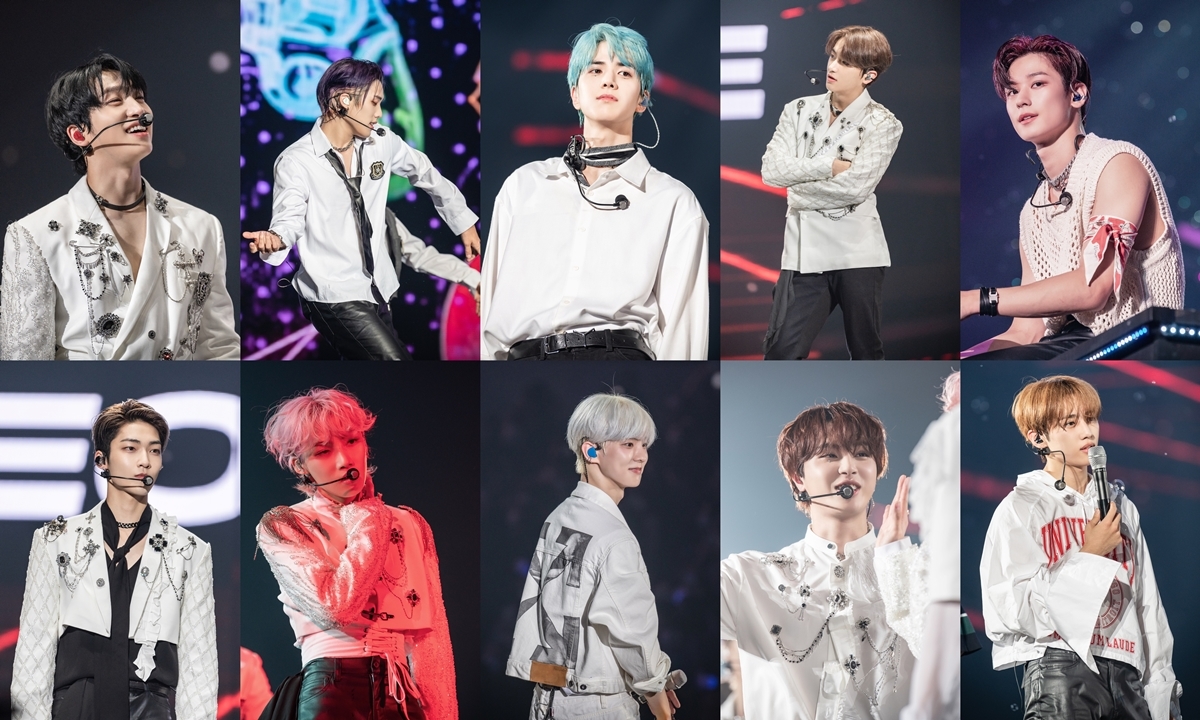 K-pop group The Boyz (IST Entertainment)
There was also a moment where the 11-member act shared their impression of the first world tour. Some members, including Kevin and Younghoon, unfolded papers and started reading messages to express their thanks to the fans, family members and the agency’s staff. Thousands of fans moved Younghoon’s heart by singing a birthday song to him a day ahead of his big day. He wept out loud, making the night more emotional.

The band’s leader Sangyeon did not forget to mention member Eric. “We’ll be back with Eric next time,” he said. The act has been performing as a 10-piece act recently as Eric has been on a hiatus due to health issues.

Ahead of the concert, the group held a press conference to share how they feel about being back in Korea after visiting 11 cities around the world. Juhaknyeon said it was impressive to hear fans’ chants in Korean, regardless of the countries the act visited during the world tour. 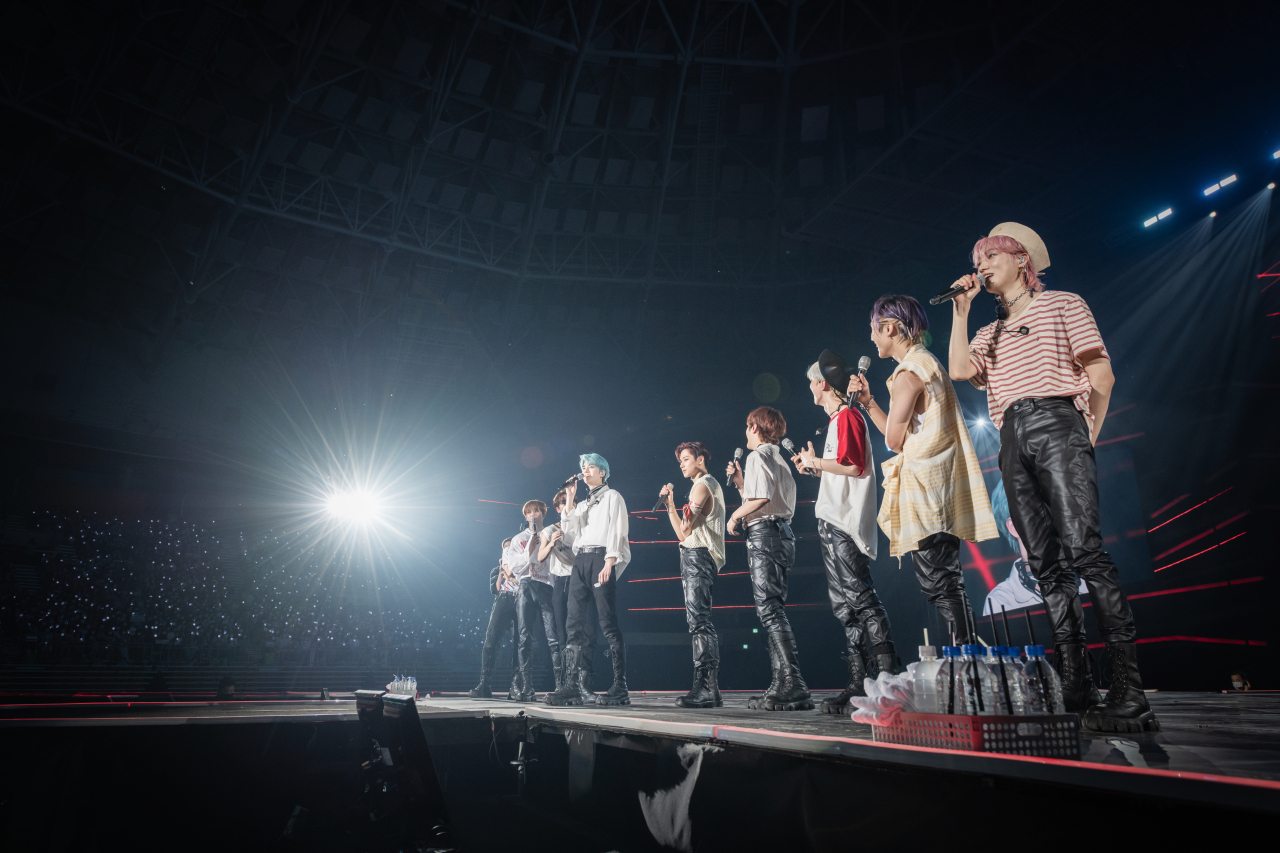 K-pop group The Boyz perform during its encore concerts for “The Boyz World Tour: The B-Zone,” in Seoul on Sunday. (IST Entertainment)
“Although (fans in different countries) speak different languages, we were able to feel that we are all connected with loving hearts,” Sunwoo said. “Since the opportunity is not given to everyone, it has been a more meaningful experience for us.”

The bandmates were pleased to hold the encore concert series at KSPO Dome, but the act has set a new goal of putting on a concert in a greater venue, according to Sangyeon. Juhaknyeon pointed out a specific place and said, “We aim to fill the Gocheok Sky Dome next time!”